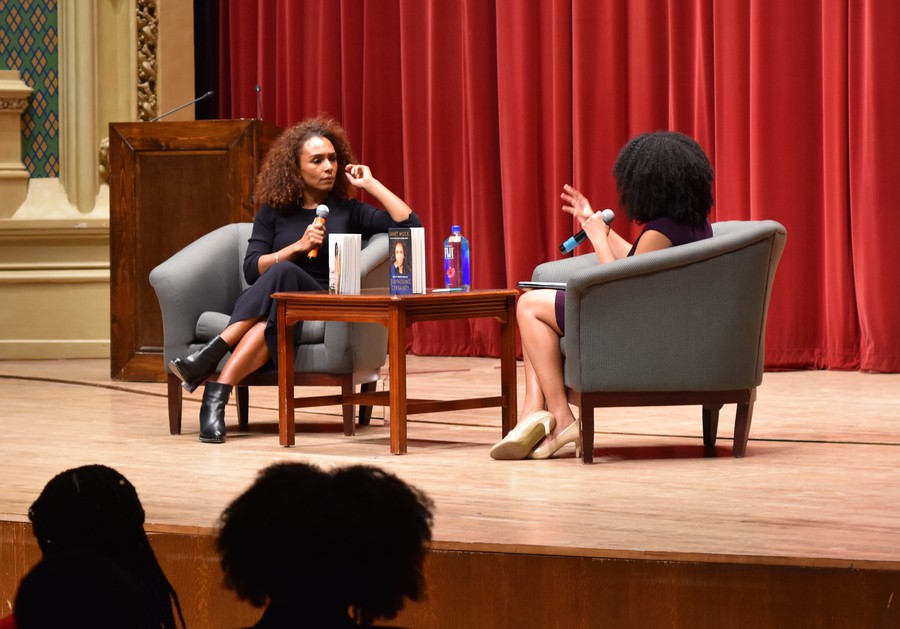 Janet Mock speaks at Mandel Hall on Thursday to share her story as a Black trans woman with fourth year Darien Dey.

The evening began with introductions by third-year OBS Political Chair Simeon Daferede. The event was moderated by fourth-year Darien Dey, who is the chair of the Leaders of Color program at the Institute of Politics. Dey wrote in an e-mail to The Maroon that she prepared for the event by reading her two books and watching past interviews with Mock.

During her talk, Mock, who is also a television producer and former editor for People magazine, discussed her experiences as a black trans woman, her writing, and her future projects. She also spoke about how the intersections of her various identities have affected her outlook on life.

Dey started the conversation by noting that Mock was the first openly trans speaker the Kent Lecture series has ever hosted and asking her how she felt about that.

“It speaks to the expansiveness of blackness in how it includes so many of us, and it’s a great step forward in terms of insuring that we create more space for black trans girls in conversations about being black,” Mock said.

“As a writer, I love words.... I truly live by Audre Lorde’s mission statement of transforming silence into language and action,” Mock said. Quoting Lorde, she said that “words are things.”

“I had never read a book that fully reflected me. So I wanted to sit down with myself at my desk and tell myself that story and hopefully blend and create the mirror that I didn’t have access to growing up.”

Mock was not afraid of turning the tables on Dey, frequently asking Dey’s own questions back to her. At one point, Dey mentioned that some phrases related to social justice and identity are products of “the academy” and asked Mock how she felt about phrases like toxic masculinity. Mock said that she didn’t often think about it, then asked Dey how she felt about it.

“It definitely was unexpected,” Dey wrote of Mock’s cross-examination. “But because students attend the Kent Lecture with the purpose of engaging in this type of enriched dialogue, I felt prepared enough to engage in an authentic way that leaves enough room for learning and for mistakes,” she wrote in an e-mail to The Maroon.

Dey then asked Mock how she thought those who lack the language to discuss issues of social justice and identity should join the conversation.

“Read a book. If you don’t know something, educate yourself. I don’t think there’s an excuse to not engage in conversation [unless you don’t have access to resources]... Listen, take notes, and take things in if someone is speaking about their experience or about their thoughts.”

After Dey and Mock finished their conversation, Mock took questions from the audience. One audience member asked whether or not there were any terms or ideas that Mock had once identified with but later changed her mind about.

“I used to always [say things about] gender being on a spectrum. Having met so many more people, I feel like that feels so basic.  I feel we need to expand that so much more. Because even the ‘spectrum,’ even just visually, I think linear. And I don’t think any of us exists on a line…. I look at it now through a prism or a kaleidoscope,” Mock said.

Mock concluded by talking about her status as a “celebrity” due to her work in trans visibility.

“In terms of my own self, I don’t see myself [as a celebrity]. Maybe certain people would see me that way in a very small circle of transness—maybe I’m a celebrity in transness, but I’m not on the cover of magazines,” Mock said. Then, she conceded: “Well, I was in a video with Beyonce.”

In an e-mail to The Maroon, Dey wrote that she spent a few moments with Mock before the conversation. “She had a strong, commanding presence but still exuded a personal warmth that made it easy to talk to her. On stage, she actively engaged with the questions and with me, in ways that I did not expect,” Dey wrote.