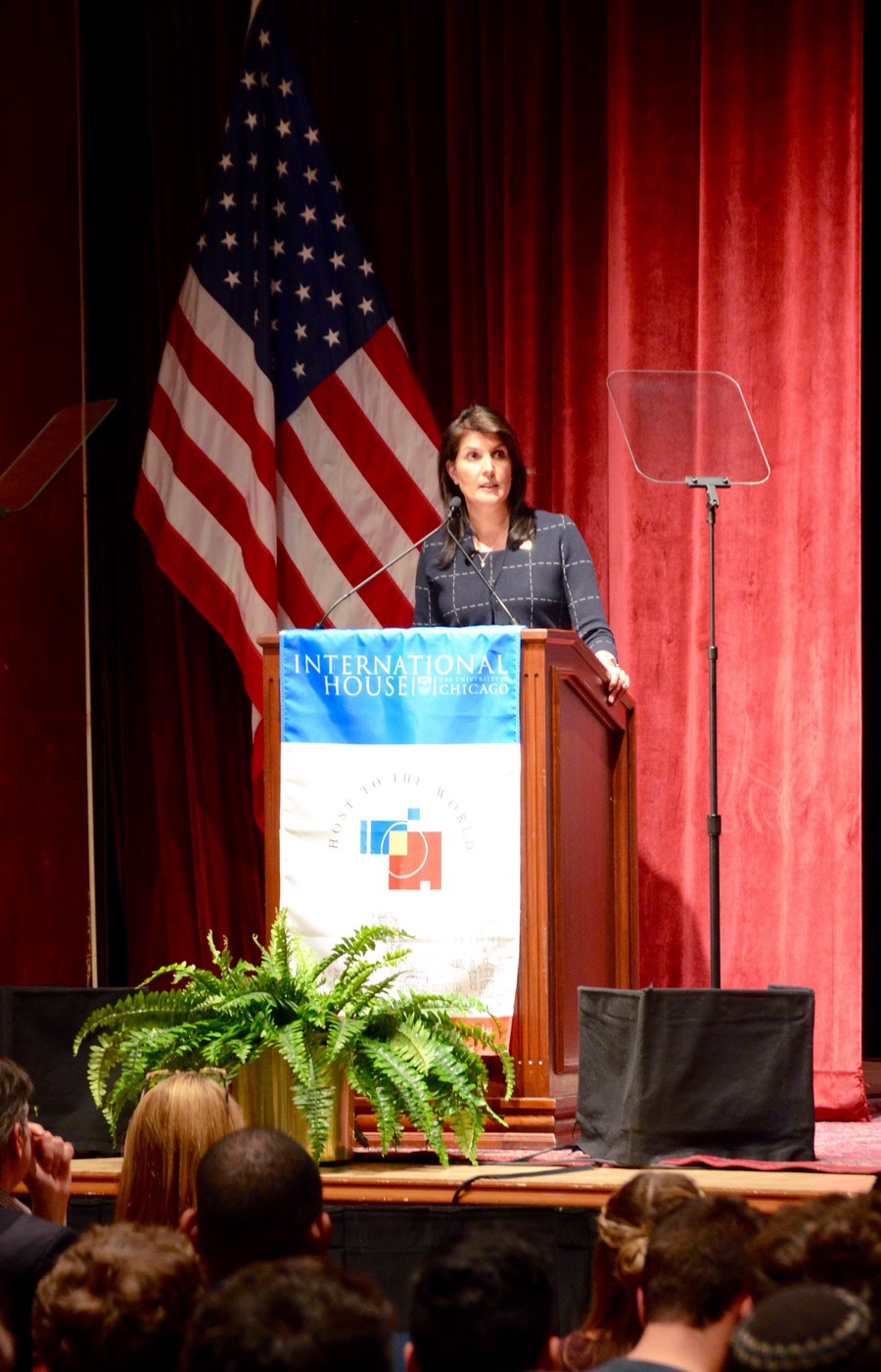 Nikki Haley, the United States’ Ambassador to the UN, presents a short address to students about the value of the UN at a time of tense foreign and domestic relations.

Nikki Haley, the United States Ambassador to the United Nations (U.N.), delivered remarks and participated in a Q&A session during an Institute of Politics (IOP) event at International House Thursday night.

Haley began by giving an overview of the U.S.’s involvement with the U.N., saying that “the history of the United States and the United Nations is a mixture of idealism and realism.” She expressed determination to show the U.N.’s value to the American people and discussed using her role as ambassador to advance American foreign policy interests.

“The United States is by far the largest financial contributor to the United Nations,” Haley said. “That doesn’t mean we should always get our way, but it does mean we should get something in return for our investment.”

She discussed instances where the U.S. was not afraid to assume a leadership position in the U.N., such as when the U.S. headed efforts to impose economic sanctions on North Korea.

Haley also discussed the U.S.’s overall effort to emphasize “actions, not words.” As an example, she explained how, after Russia refused to pass a U.N. Security Council Resolution condemning a chemical attack on civilians made by Syrian President Bashar al-Assad’s government, the U.S. decided to launch 59 Tomahawk missiles at a Syrian government–owned airbase.

Haley ended her remarks by sharing advice she received from former Secretary of State Henry Kissinger: “Put yourself in your adversary’s shoes. Understand what he or she wants and use that to guide your negotiations…. This is a skill I am afraid is being lost in America today.”

IOP Executive Director David Axelrod opened the Q&A session by asking Haley student-submitted questions about the U.S.’s decision to veto the U.N. resolution which condemned the Trump administration’s recognition of Jerusalem as the capital of Israel.

Haley said she “didn’t appreciate” the General Assembly’s decision to hold a vote on the resolution, saying, “That was a resolution that did nothing but humiliate us.”

She added, “All we were doing was following what Congress passes over and over again, where the American people say Jerusalem is the capital of Israel, and we were putting our embassy in the capital, like we do so many other embassies.”

Haley mentioned that Trump administration officials Jared Kushner and Jason Greenblatt are working on a peace plan for the Israel-Palestine conflict.

Haley also answered questions regarding the Syrian refugee crisis and defended the U.S.’s decision not to receive more refugees. “You can’t take a chance of your people not being safe,” she said. “At this time in the world, safety and security for the American people is the President’s top priority.”

She pointed to her recent visits to Syrian refugee camps in Jordan and Turkey, saying that of all the refugees she talked to, none of them wanted to come to the U.S. “They can see the [Syrian] border. They want to go home.”

When Axelrod asked about the possibility of war with North Korea, Haley responded that it is dependent on North Korea’s decisions.

“All options have always been on the table,” she said. “[But] nobody wants war. That’s always the last option.” She explained that in order for tensions to de-escalate, North Korea must “surrender anything tied to” its nuclear program.

Axelrod later noted, “You have consistently made a very strong statement about what the Russians did [meddling in the last presidential election and annexing Crimea] and why we can’t tolerate it. Why can’t the President do that?”

His question was greeted by a brief silence from Haley and audience applause.

“David, I think through [his] actions, the President has acted. That’s a question that you’ll have to ask him,” she answered.

“When I wake up, I don’t know what he’s going to tweet about,” Haley said.

She recalled when the President asked her if it was alright to use “Little Rocket Man” to refer to North Korean leader Kim Jong-un in a speech, and she responded, “It would be different.”

Haley ended the night by sharing her opinion on the recent shooting in Florida, prompted by a question from Axelrod.

“When a tragedy happens, the first reaction is political,” Haley said. She encouraged people to see gun violence as a part of a larger problem.

“It’s not just about guns; there needs to be a full level conversation from the start to the end, on every aspect that affects a child in a school when it comes to safety,” Haley said. “Every one of us has an obligation. Only then will we get to the heart of these shootings.”