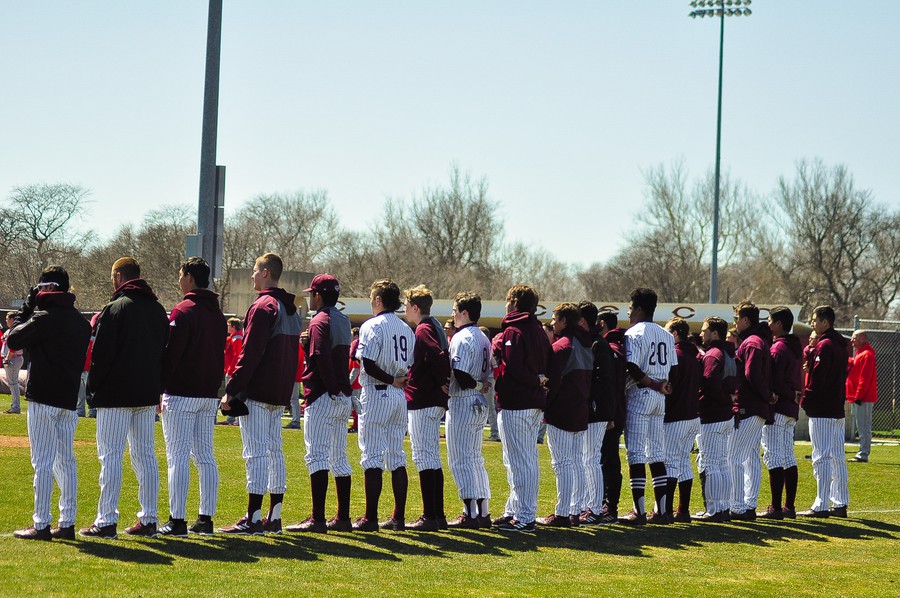 The Maroon baseball team looks on during the National Anthem.

The UChicago baseball team capped off one of its best seasons in program history, ending up with a total of 26 wins, which is tied for the most season wins in program history. This was all in spite of a shaky start, as the Maroons lost their first three games of the season.

Both the pitching and hitting efforts were integral to the team’s success, as stalwart veterans, like third-year pitchers Brenton Villasenor, and Ravi Bakhai, third-year outfielders Connor Hickey and Josh Parks, second-year designated hitter Payton Jancsy, and up-and-coming first-years, such as pitchers Zach Morochnik, David Clarke and Chandler Yu, second baseman Jimmy Kelly and shortstop Brian Lyle, among many others, put forth stellar performances throughout the season.

Of course, it was also the end of an era for the team’s three fourth-years: pitcher Ricardo Fernandez, outfielder Max Larsen and catcher Matt Slodzinski. Larsen in particular will go down as one of the most decorated players in program history, holding the school record for career doubles with 60 and the third most runs in a career with 140. Over the course of his career, he managed a total of 493 at bats and a 0.347 career batting average. With that, it is perhaps unsurprising that Larsen is this year’s recipient of the J. Kyle Anderson Award, an honor given by the Order of the C to the fourth-year baseball player who has not only performed exceptionally on the field, but also shown evidence of character, leadership, and dedication.

With only three departing fourth-years, the team is in a good position for next year, as it retains most of the talent that made this season such a success.

The team has had an influx of talented pitchers join in the past three years, with the staff’s overall ERA a commendable 4.03, with a total of 309 strikeouts and only 308 hits allowed throughout 310.1 innings of play. This was particularly noticeable as the team tallied five shutout wins, in comparison to only two in 2017. Arguably the biggest win of the season happened against Grinnell College on March 4, as the South Siders thrashed the Pioneers 16–0, while only allowing one hit through seven innings of play, thanks to the strong efforts of third-year Joe Liberman, Yu, and second-year Dan Smith.

Offense also had a strong season; not only did Larsen set the school record for career doubles, with 23 in this season alone, but the team totaled 14 home runs this season, led by Parks with five, and third-year Brady Sarkon with three. Hickey contributed his signature speed, with a total of 17 bases stolen, and 49 runs, while Jancsy also emerged as a tour de force, leading the team with a 0.367 batting average for the season over the course of 128 at bats.

The eight third-years on the team (Bakhai, Villasenor, Liberman, Hickey, Parks, Sarkon, catcher Ian Bohn and third baseman Max Brzostowski) are sure to provide great leadership next year as the team recruits a new crop of incoming first-years.