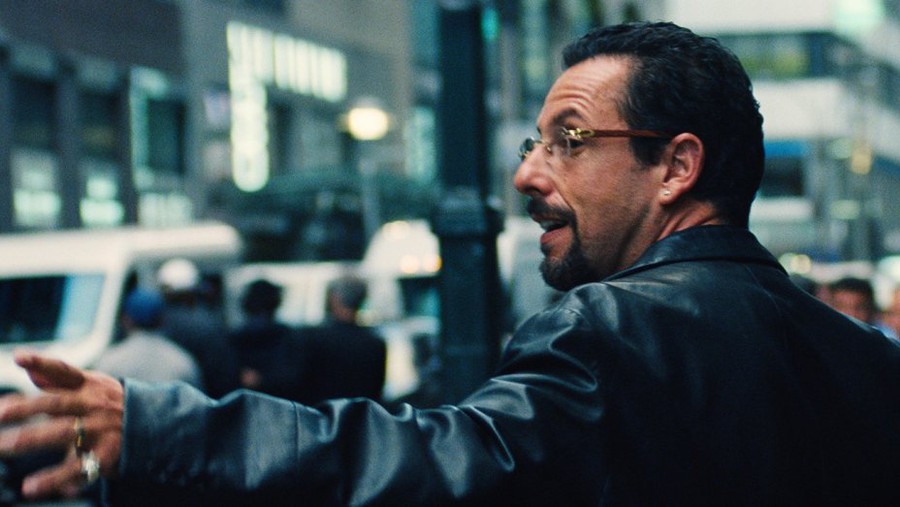 Uncut Gems is the latest crime thriller by filmmaking siblings Josh and Benny Safdie (Good Time), starring Adam Sandler as Howard Ratner, a New York City jewelry store owner and reckless gambler who bets everything in hopes of scoring big and paying off his debts to some dangerous people before it’s too late. The film also stars LaKeith Stanfield, Idina Menzel, Julia Fox, Judd Hirsch, and Kevin Garnett as himself.

Fans of Good Time will not be disappointed as the Safdie brothers deliver another high-stakes, adrenaline-fueled film that will keep audiences on the edges of their seats. Within the first 10 minutes of the film, the Safdies suck us into Howard’s world. As we follow Howard’s journey and see New York’s atmosphere through his eyes, we learn that the city can be cruel and unforgiving.

Howard dreams of scoring big, and he gets his opportunity when he obtains an opal-encrusted rock that he hopes to auction off. At first, it seems as if Howard will succeed when he discovers that Celtics player Kevin Garnett is obsessed with the rock’s “magical abilities” and will pay anything to have it, even going so far as letting Howard borrow his championship ring to rent the rock for a few days. However, Howard eventually learns that the road to riches isn’t cheap or easy—he suffers from numerous failed business transactions, struggles to support his family, and is terrorized by a group of thugs he owes a lot of money to. While Howard might not be the most likeable character in the world, we can’t help but sympathize with his struggles and admire his drive.

This is not a stupid Adam Sandler comedy like Pixels or Jack and Jill, in which Sandler makes a bunch of pop culture references and toilet jokes, and yells with a weird, high-pitched voice. This is a gritty, character-driven drama, and he absolutely knocks it out of the park. While Sandler has previously proven, in films like Punch-Drunk Love and The Meyerowitz Stories, that he can be a truly great actor, this is without a doubt the best performance of his career. He gives such a phenomenal performance that the rest of the movie simply could not function without him.

Along with Sandler’s performance, the Safdies’ direction and writing bring complexity and great storytelling to the film. With a sharp, tight script that allows Sandler and the supporting cast to lean on their strengths, and the Safdies’ signature handheld cam and close-ups, Uncut Gems has an intensity that captivates the audience to the very end. The Safdies have created a world and story that challenge the protagonist, presenting Howard as a man constantly under pressure from his environment while on his journey to riches, creating an almost claustrophobic atmosphere from which Howard struggles to escape.

Despite my praise of this film, it is far from perfect. While Idina Menzel gives a good performance as Howard’s wife, the scenes involving Howard and his family were consistently boring, bearing no real impact or weight on the film overall. While one can argue that their role is to make Howard a more sympathetic character, that argument doesn’t really hold up, since the family never really seems to support or appreciate Howard. It made me wonder why they were even in the movie, since Howard’s relationship with his girlfriend had more impact on the story than his relationship with his family. If Howard’s family was cut from the story, it would have made the film stronger.

In fact, stemming from this point, while this is without a doubt Adam Sandler’s movie, the film could have benefited from giving its supporting cast more to work with. While Howard was bursting with depth and personality, the same can’t really be said of the other characters. Besides Adam Sandler’s character, every character felt one-dimensional and never had a unique personality. While I really like LaKeith Stanfield as an actor, there wasn’t much to his character other than “the guy who brings in customers to Howard’s store but is difficult to work with.” The same goes for Idina Menzel, whose character can be summed up as “unhappy wife/mother having to deal with Howard’s crap.” Surprisingly, the only supporting character that stands out is Kevin Garnett, but even his character is simply established as “I need this rock, and I’ll pay anything to get it.” While this didn’t bother me as much, since Adam Sandler took up most of the screen time, it would have been nice to have a supporting cast that was equally as interesting as Howard himself.

Additionally, the film is a bit too long, clocking in at over two hours. The second act, consisting of Howard’s successive failures, drags on. Are so many disappointments really necessary? We get the idea. Howard is going through a slump.

Overall, though, I thought this was a very well-written, well-directed film with a brilliant performance by Adam Sandler. If you liked the Safdies’ last film, Good Time, then you will very much enjoy this film. And if you like fast-paced, adrenaline-fueled movies that will keep you on the edge of your seat, then this movie is for you.