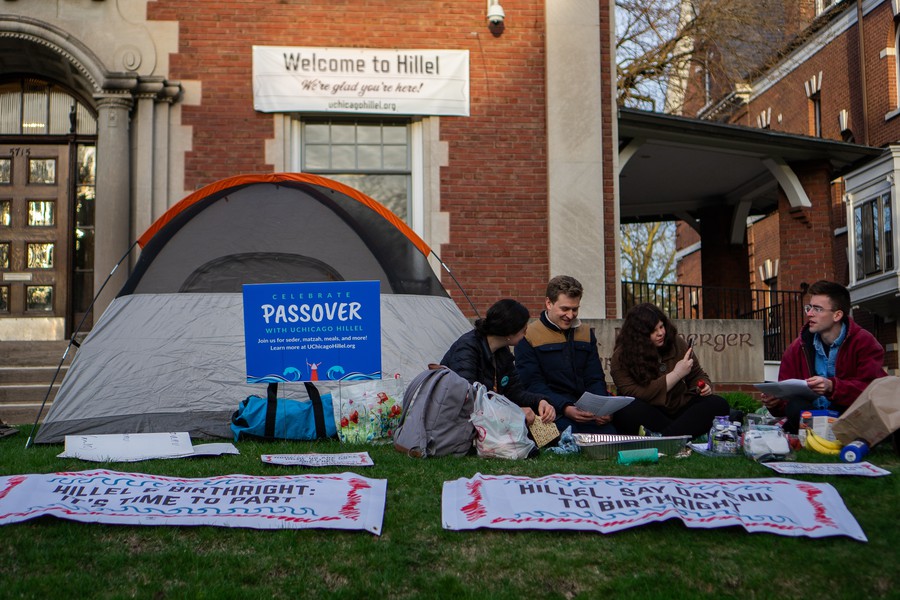 Activists from UChicago’s chapter of IfNotNow staged a protest and on-campus sit in late Tuesday afternoon, demanding that UChicago Hillel stop taking UChicago students on sponsored trips to Israel through Birthright, an organization that offers free trips to Israel for young Jews. IfNotNow organizers allege that Birthright does not provide a balanced perspective on the issue of Israel and Palestine.

IfNotNow formed in 2014 to advocate an end to what they term the Occupation, which they define as “military rule over Palestinians in the West Bank, East Jerusalem, and Gaza,” according to their website. The UChicago chapter of IfNotNow was established last academic year.

The Birthright protest, which was held during the Jewish holiday of Passover and was attended by around 20 students, began on the quad before proceeding to the lawn of the Johanna and Herman H. Newberger Hillel Center, where activists sang songs, made speeches, and participated in a sit-in.

IfNotNow activists camped out on Hillel’s lawn for hours, setting up tents, displaying banners, partaking in a Passover meal, and screening a film. As of 9:00 p.m. Tuesday night, members of IfNotNow declared their intention to remain at Hillel’s entrance until Wednesday morning. Activities within Hillel continued as normal.

Tuesday’s actions come after the publication of an open letter in The Maroon to UChicago Hillel calling for the organization to cut its ties to Birthright, framing the sponsored trip as a one-sided silencing of Palestinian voices. This demonstration is the second of the year for IfNotNow UChicago; in February, members of IfNotNow UChicago staged a demonstration that culminated in the delivery of a box of letters to Hillel urging reform to Birthright’s curriculum.

Activist and graduate student Daniel Epstein said IfNotNow is asking UChicago Hillel to show moral leadership. “Bottom line is, we’re here to remind Hillel that they have a choice and that their choice matters and that they have an opportunity to take real moral leadership and make a brave stance, to be on the right side of this issue,” Epstein said.

In a statement, Rabbi Anna Levin Rosen of UChicago Hillel said that Hillel wants to hear the demands of IfNotNow activists. “[D]ialogue is a key component of Jewish culture and we believe much can be accomplished through open conversation," Rosen said. "We will continue to discuss important issues with students, including our commitment to our Birthright Israel program.”

Rabbi Rosen nevertheless made clear Hillel’s continuing support for the Birthright Israel program, saying that “we know that Birthright Israel is a key program for engaging students in Jewish life and building a strong Jewish community on campus.”

Unlike previous IfNotNow demonstrations on campus, which expressed the organization’s desire for Birthright trips to include Palestinian perspectives, Tuesday’s demonstration called for an end to Hillel-sponsored Birthright trips altogether. In an op-ed published in The Maroon on April 12th, IfNotNow stated that it is time for “American-Jewish institutions to cease all cooperation with Birthright.” In the same op-ed, IfNotNow articulated the meaning of ceasing all cooperation: “Hillel, it is time to end your relationship with Birthright.”

Regarding IfNotNow’s future plans, Daniel Epstein stated that “we will continue to urge [UChicago Hillel] to take moral leadership on this issue and we will continue to urge the Jewish institutions that represent us and our peers to leave Birthright behind—to not go on trips, to not sponsor trips, to reject the politics they represent and the cynicism of the narrative they present to thousands of young Jews.