“Everyone Was Everyone's Friend” at BROCKHAMPTON Concert 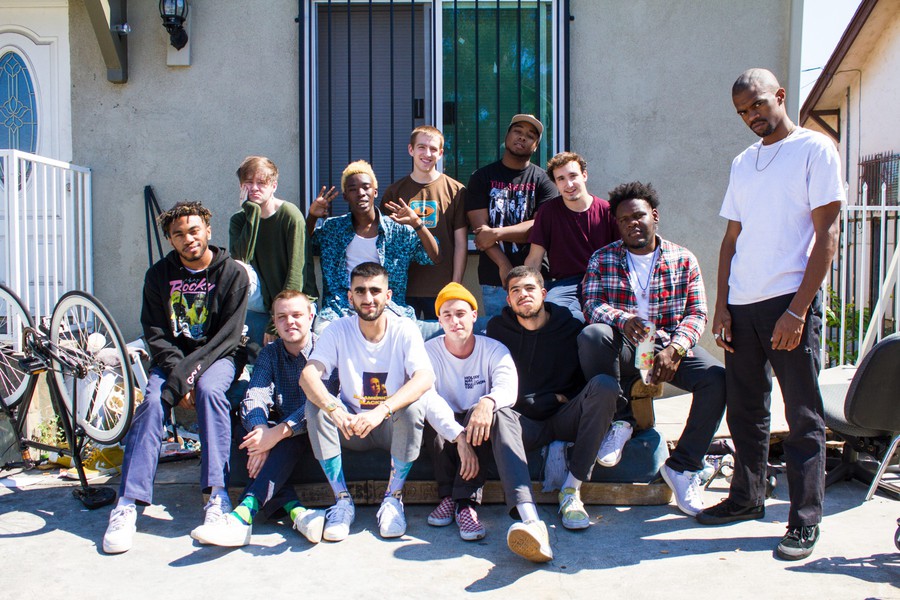 BROCKHAMPTON rock the Aragon Ballroom this past December.

One of the most wonderful things about a concert is how the audience can consist of such a myriad of people all connected by one thing: their love for the music being performed. Maybe the music happens to be what they casually listen to on their way to work or what they throw on when they’re with their friends. Or maybe it’s the music that saved them from themselves. You never know. All you know is that the music means something to you and something to them. Maybe it’s the same, maybe it’s not. And that’s okay, because you’re both here and that’s all that matters. This is especially the case when it comes to BROCKHAMPTON.

It’s incredibly difficult to put BROCKHAMPTON’s style of music in a box, and completely impossible to pick any one of their songs to represent the band as a whole. BROCKHAMPTON is essentially a mixture of pop and rap elements with songs ranging from party bops to melancholy ballads. This engaging style incorporates various sentiments of the band, such as their backgrounds, rise to fame, success, personal mental health struggles, religion, shortcomings, and times of despair and healing. Though some of these concepts are quite popular in the music industry, what really strikes through is how genuine and raw the vocalists are—especially when they’re performing.

A key thing to know about BROCKHAMPTON is that they are a 13-member self-proclaimed boy band—a term that they’ve been very adamant about, despite how their image and sound seem to not exactly fit what we’ve come to imagine a stereotypical “boy band” to be. In fact, in their song BOOGIE, they refer to themselves as “the best boyband since One Direction.” Despite the group having 13 members—one less than the original 14 since Ameer Vann was kicked out of the group for sexual misconduct—not every member’s voice is heard in the songs. There are only six, previously seven, distinct voices on stage, but the rest of the members, who take care of the video and sound production, are considered full-fledged members. It’s important to know that when referring to BROCKHAMPTON, you’re referencing the whole team who bring different talents to the table and, more importantly, a diverse group of very close friends who are black, white, gay, straight, South Asian, Hispanic, Irish, American, and African.

I had the pleasure of experiencing BROCKHAMPTON at the Aragon Ballroom for their Heaven Belongs to You Tour in celebration of their fifth album, GINGER. This performance was opened by slowthai and 100 gecs. Though most people were solely at the concert for BROCKHAMPTON and piled in just in time to see them, those who arrived early enough for slowthai, a British rapper from Northampton, who is featured on GINGER rapping about his mental health and relationship with religion; and 100 gecs, a musical duo who just released their debut album this year; were not disappointed. Despite differing from BROCKHAMPTON in musical style, slowthai and 100 gecs performed with a similar amount of energy. The crowd bopped along to slowthai’s gritty and rough instrumentals and 100 gecs’ experimental electronica. When BROCKHAMPTON finally came on, the crowd was more than hyped for whatever was going to be performed.

Pockets of air were few and far between in the audience. The entirety of the ballroom had steadily filled to absolute capacity, rendering it near-impossible to see the stage. I remember feeling my makeup streak down my face as sweat filled the air from the pushing and pulling. It would have been all too easy to lose someone and I could feel bodies on every side of me. This experience was further enhanced by the band who made many attempts to directly engage the audience. At one point during the concert, the band actually invited what must have been about 20 lucky individuals to go on stage and perform one of their songs with them. During the fast songs the crowd would bounce like crazy, and the band would take the initiative to demand that the crowd “open up the pit” for various small moshes to form all throughout the room. Fortunately, despite having the capacity to end with accidents, those people who I saw fall during the mosh were all helped up before they could get trampled. However, all of the heat and energy did prove to be a bit much for some people—I later found out that there were some cases of people passing out in the middle of the show.

Halfway through the concert, the band started a call and response that went, “Can I get an ‘I’m gay’?” “I’M GAY!” Coming from the Bible Belt, I personally had never had an open experience like that and was later even more surprised when I found out the band originates from Texas.

A little while later, the band demanded that audience members “raise [their] hand if [they’re] gay!” This was met with the openly out rapper, Kevin Abstract, raising his hand alongside what must have been over half the room. These might seem like little things, but I couldn’t help but be taken aback by the sheer number of queer-positive individuals in the room. The band was using their platform to not just normalize being queer, but also celebrate it. This is a big deal because, though being queer has become more commonplace and accepted in society, it really still is an issue in various places—especially in POC communities. In the Hispanic community specifically, “machismo” is a term meant to refer to the extreme masculinity men are expected to portray throughout their whole lives. It’s impossible for machismo and queerness to coexist. To see a band composed of various ethnicities all celebrating queerness means the world to young individuals who have had to grow up thinking that being gay was not okay.

Ultimately, the concert was definitely a night to remember, and I’m positive it was quite a few audience members’ favorite night of all time. BROCKHAMPTON performed amazingly for their fans, and slowthai and 100 gecs likely gained some new supporters. Even if someone wasn’t a fan of the musical styles in the room that night, they’d have to admit that the energy in the room was incredibly crazy, positive, and accepting. Everyone was everyone's friend that night.