As part of a series of monthly constituent nights in Hyde Park, Tarver’s office hosted the discussion with representatives from two nonprofit groups, Vote Solar and Blacks in Green. 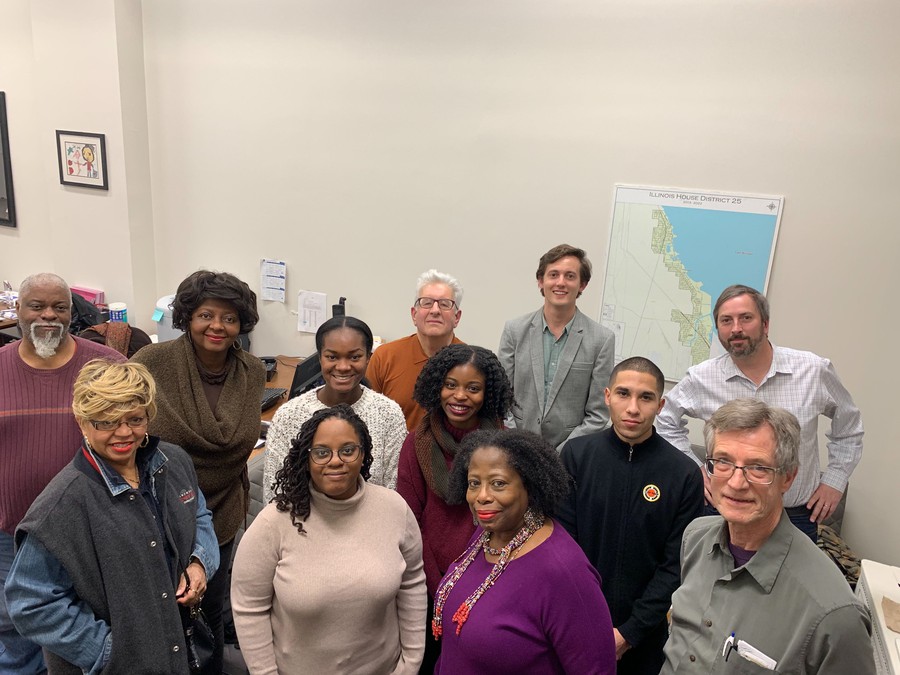 Curtis Tarver's office staff with those present at the meeting.

State Representative Curtis Tarver’s office hosted a conversation with constituents and renewable energy proponents to discuss local impacts and issues of equity in what one presenter called “the most progressive climate justice legislation that any state has had,” for the Illinois Clean Energy Job Act (CEJA).

CEJA, if passed, would rapidly expand renewable energy use in Illinois by imposing a goal of using 100 percent renewable energy by the year 2050. It would also aim to ensure that the transition benefits socioeconomically disadvantaged populations through job training and other measures. Tarver was one of 12 initial cosponsors of the bill in the house when it was introduced in Springfield during February of last year.

Tarver was not present for the conversation due to a prior commitment, according to his office staff. The conversation was led by Kyra Smalls, Tarver’s director of outreach; John Delurey, Midwest Director for Vote Solar, a nonprofit organization that promotes the expansion of solar energy; and Naomi Davis, the founder of Blacks in Green (BIG), a nonprofit based in Woodlawn focused on sustainability and socioeconomic equity in environmental initiatives.

The conversation was a part of Tarver’s new plan to host constituent nights by inviting organizations to lead discussions on various topics affecting citizens in Illinois’s 25th district, according to Smalls. Issues-based events at Tarver’s Hyde Park office, located at the corner of East 53rd Street and South Kimbark Avenue, will take place every second Monday of the month.

Delurey said he hopes CEJA would lead to an expansion of solar energy that would benefit disadvantaged populations in Illinois.

“Solar has a tendency, like so many other businesses and industries, to gravitate towards centers of power and privilege… but solar, unlike a lot of those other things, has this unprecedented opportunity to right some of those long-standing wrongs,” Delurey said to the audience.

According to Davis, who represents BIG as part of the Illinois Clean Jobs coalition supporting CEJA, legislators need to concentrate on the potential for environmental legislation to improve socioeconomic equity.

BIG currently works through the Illinois Future Energy Jobs Act (FEJA), legislation from 2016 meant to expand renewable energy, to train citizens in solar energy installation jobs. Davis wants to see more job training under CEJA and wants the legislation to expand stipends for this training so that residents from lower economic backgrounds can afford to participate.

Davis also said the legislation Tarver is cosponsoring will expand Illinois’s commitment to economic equality in the energy sector. “It’s fair. It’s appropriate. It’s what it was intended to be.”

Delurey discussed the current initiatives of FEJA, including the state’s Solar for All program that promotes economic equality in the use of solar energy through state-backed funding of solar energy systems on households, nonprofits, and public buildings. He also explained the state’s Community Solar program, which allows residents who cannot apply solar panels on their houses to benefit from solar by purchasing a portion of energy generated by a community solar garden elsewhere in the state, and then receiving a credit on their electric bill to compensate them.

However, despite these efforts and others by the state to expand renewable energy use under FEJA, Power Agency director Anthony Star said the state is falling short of the legislation’s initial goal to produce 25 percent of energy from renewable sources by 2025. According to the Energy News Network, the state should be using 17.5 percent renewables in the 2020–2021 fiscal year, but Star said this summer that Illinois will only be able to produce eight percent of the energy use through renewables.

CEJA is currently stuck in the House Rules Committee after the bill failed to come up for a vote in the fall veto session. However, Governor J. B. Pritzker has publicly signaled a commitment to move on the legislation at the start of this year.

Delurey said that CEJA will reinforce and strengthen FEJA in order to push green environmental policy in Illinois.

“When this passes, in part thanks to Representative Tarver’s support as a cosponsor, we will probably have the most progressive climate justice legislation that any state has had,” Delurey said.