Journalist Jeff Horwitt of the Wall Street Journal and NBC discussed the presidential race and how public opinion could impact its outcome at a Harris School event on October 16. The event was part of the Harris School’s 2020 Election Webinar series and was moderated by Marc Farinella, senior advisor for the Center for Effective Government.

Horwitt began his talk by looking at election outcomes in 2016. Horwitt, who also works for the public opinion research firm Hart Research, said of that election night, “it was an unpleasant event for us pollsters.”

Horwitt emphasized the role swing states, such as Michigan, Wisconsin, and Pennsylvania played in the 2016 election. These three states turned from blue to red in 2016 due to people who voted in the last few days of the election. “Late deciders, and Trump’s main base of white, non-college voters in Midwestern states would be two big factors” contributing to Trump’s victory in 2020. The NBC/WSJ poll, which Horwitt and his team worked on, estimates that 61 percent of white men without a college degree are still projected to vote for Trump in 2020. 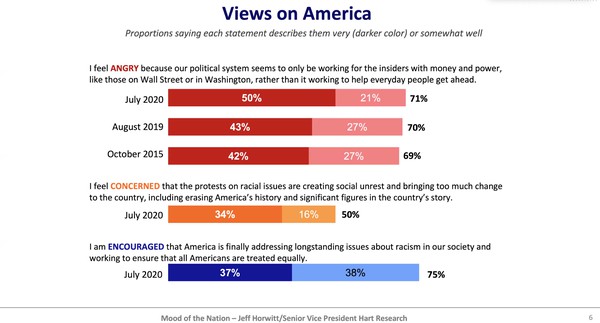 Jeff Horwitt presented a series of survey results at a Harris event on the 2020 election.

Horwitt said that another way to predict election outcomes was through candidate statements. He referred to the October 9-12 WSJ/NBC survey results that indicated that 39 percent agree with Trump’s candidate statement and 50% with Biden’s. Trump’s candidate statement focuses on free speech, the silencing of the left, protecting law enforcement, and “keeping America great.” Biden’s statement is a call to action for “moving out of darkness” and “restoring decency in the White House.” Horwitt stressed that American voters prefer simplicity, and that “Clinton’s policy over policy” platform in 2016 was seen as unappealing compared to Trump’s video advertisements.

“What to look out for in 2020? Gen Z and millennials,” Horwitt said. He said that young voters would likely be motivated by recent social justice protests and the impact of COVID-19. “These voters desire for change and are unhappy with the current situation [...] Polling indicates 46 percent of Americans want a candidate that pushes the status quo, confront and challenge the establishment in government to shake up how it operates,” Horwitt said.

Horwitt said that the Democratic Party would face a challenge in widening Joe Biden’s appeal to younger voters. “We’re seeing younger voters more likely to identify as Democrats over this period of time, and one of the challenges of the Democrat parties is how do the more moderate democrats like Joe Biden speak to the younger voters in a way that really resonates with them,” Horwitt said.

“Biden is actually not doing very good with 18 to 34-year-olds,” he went on to say. “Even though he is winning by a huge margin right now, it is really a response to Donald Trump.” Republicans, he said, also have work to do in appealing to young people, especially on issues such as student loan debt and climate change.

Jeff Horwitt presented this data on concerns constituents have about both presidential candidates in the 2020 election.

Horwitt discussed a wide range of fears voters have entering this election. Many are worried that Trump will “divide the country rather than uniting it” and that he does not have “the right temperament to serve as Commander-in-Chief.” Criticisms of Biden stem from the fear of the Democratic Party pursuing “very liberal policies” under his leadership, and that “he has been in Washington for 47 years and has not accomplished much.” 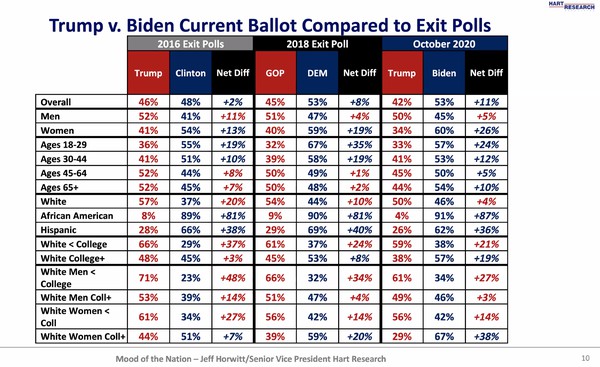 Jeff Horwitt presented this poll on President Trump's polling versus that of Vice President Joe Biden.

A self-identified Democrat, Horwitt said, “it pains him to say that Trump’s chances of winning are not low…that is the sad reality.” Though early polls indicate that 79 percent of people who voted by mail are overwhelmingly Democratic, only 31 percent of late deciders are projected to vote for Biden. The poll also shows there is still 11 percent of up-for-grab voters—those still deciding between the candidates. These up-for-grab voters are usually young, white, blue-collar males who mostly identify as Republican or Independent.

Biden is currently up 11 points according to NBC polls. Nevertheless, Horwitt warns that “poll results are just a snapshot in time,” and that “the margin is razor-thin: it could still narrow drastically.”