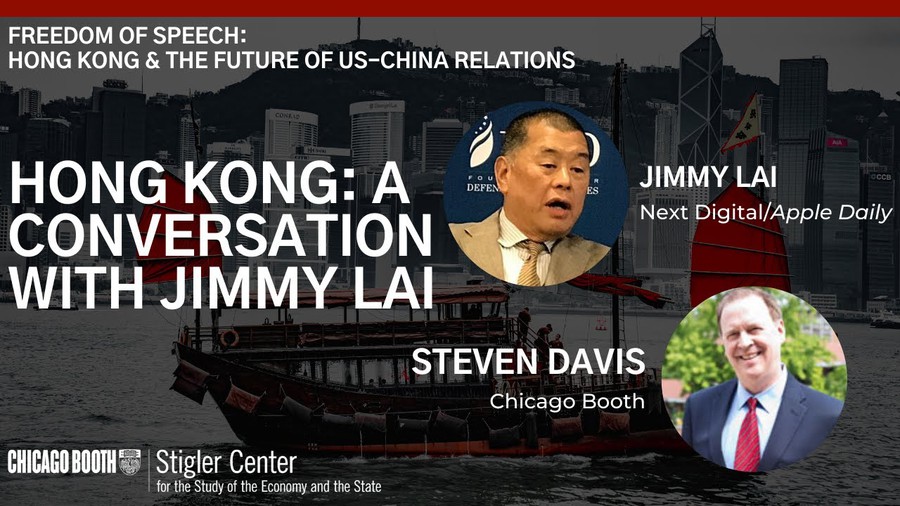 On October 22, University of Chicago Booth School of Business professor Stephen Davis hosted a virtual conversation with Hong Kong businessman and media tycoon Jimmy Lai. They discussed Lai’s pro-democracy activism and journalism and his views on the Communist Party of China (CPC).

Lai and Davis discussed Hong Kong’s shared values with the Western world, including their commitment to capitalism.

“Capitalism is not about just making money. Capitalism works just because underlying the capitalist system there’s values.” He listed commitment to contract, respect for private property, and prioritization of freedom of speech as examples of these values.

Lai said that freedom of speech is important for economics because it fosters competition and the exchange of ideas. “In business you also need criticism which makes you reflect and improve,” he said. Without the freedom to share opinions and ideas, new business developments and methods cannot be achieved.

Lai is familiar with the intersection of business and journalism. After the Tiananmen Square protests and massacre in 1989, Lai founded Next Digital, a pro-democracy media company, which he described as “an overnight success.” Five years later, in 1995, he started Apple Daily, a tabloid newspaper that is a branch of Next Digital.

Lai was also critical of China’s economic and political systems. He believes that the CPC’s strict renunciation of anti-party thought will isolate China from the rest of the world and create internal instability. “The only long-term stability for China is for them to assimilate into the international community’s values,” he said. “China cannot become an island and be stable.”

Lai’s activism and his public criticism of the CPC coincided with his arrest in early August of this year, when 200 police officers raided the Apple Daily headquarters. He was arrested under a national security law that China passed at the end of June and charged with collusion with a foreign country or external elements, according to the New York Times.

As he wrote in an op-ed to the New York Times a few months before his arrest, Lai had long feared that China would introduce such national security laws in an effort to stifle speech and individual liberties in Hong Kong.

In 1997, England transferred Hong Kong to China, who agreed to cooperate under a “one country, two systems” relationship until 2047, when Hong Kong will be governed with the Chinese political system. China has been attempting to have a smoother transition before this agreed-upon date of decision.

According to Lai, the CPC views Hong Kong as a danger because it provides a “window” to the “outside world” that could threaten China’s political system. Lai called on Americans to pay attention to Hong Kong’s increasing suppression by China.

“Our only saving grace is for the world to pay attention to us and voice out in support of us because they find it very important that Hong Kong, sharing their values, is not being crammed down,” he said. “Because if Hong Kong is crammed down, [...] that has a damage to the credibility of the Western values.”