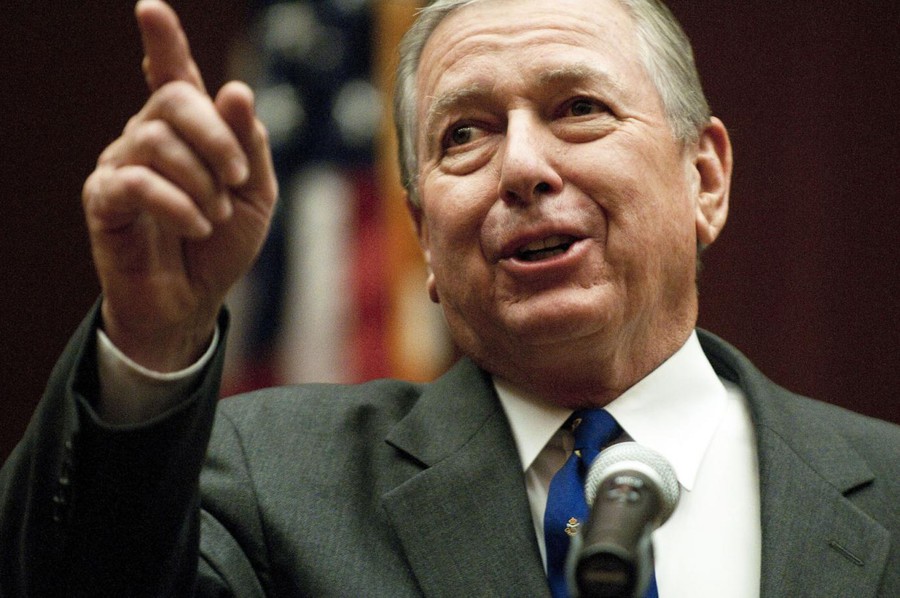 Former Attorney General John Ashcroft (J.D.’67) joined the Law School on October 23 for a conversation with Dean Thomas J. Miles about his time at UChicago, as well as his work in academia and public service.

Ashcroft looked back on his time at the Law School with great fondness. “I have to express my appreciation for the law school… for not only covering my tuition, but also for allowing me to meet my wife,” he said. My greatest advice for listeners today is if you find a good wife—marry her!”

Since graduating from the Law School, Ashcroft has served in the executive and legislative branches at both state and federal levels of government. He was the Republican governor of Missouri from 1985-1993 and senator from 1995-2001 before being appointed as Attorney General in 2001.

Ashcroft cited liberty as a core value of both life and government. “Liberty is the most important—it is the driving force to allow you to pursue life and happiness,” he said. “Democracy is a process, it’s not an outcome. The French, that’s why they sent us the Statue of Liberty and not the Statue of Democracy!”

Ashcroft recalled that he did not plan to go into politics, but that he decided to run to prevent a single-candidate primary for a Missouri House seat in 1974. “To be honest, at that point I couldn’t even name all the counties in Missouri,” he quipped. “I just decided to run.” Though he lost in the end, Ashcroft did manage to land a job as state auditor through the newly elected governor’s sudden vacant position.

“You know that saying—don’t be afraid to fall, just whenever possible, fall uphill. I lost the race for Congress, but became the state auditor, and later I lost the race for chair of the RNC but became a US Senator instead. For me, I kept falling uphill,” he said. “I’m a Christian, a person of belief. There’s a principal in the Bible where there’s crucifixion and there’s resurrection. Every time I lost an election, I gained something else.”

Though Ashcroft may be most well-known for his expansive career in public service, he has also co-authored several textbooks on business law. He is now a law professor at Regent University, a conservative Christian institution in Virginia. When asked by Dean Miles if he teaches using the Socratic Method, where students learn through discussion and discourse instead of mere lecturing, he laughed and said, “Well, I hope I do.”

“My job is not to answer students’ questions, my job is to question their answers,” he said. “UChicago is a place where I was not urged to embrace someone else’s answers, but to question my own [...] If my students come to question their own answers, that’s the ideal.”

Concluding on his time in government, Ashcroft said, “Being in government isn’t about doing the minimum [...] It’s about making investments that at present seem painful, but in the long run reap great benefits,” he said. “Leadership is about what the right thing to do is. The privilege of leadership doesn’t come easily and without risk, but it’s worth it to me.”