Even As University Community Returns to Campus, Local Hyde Park Restaurants Look Ahead to Winter With Concern

A newly introduced ban on indoor seating at restaurants, the insufficiency of the CARES Act funding, capacity restrictions, and public fear about the safety of dining in continue to pose significant financial threats to local restaurants. 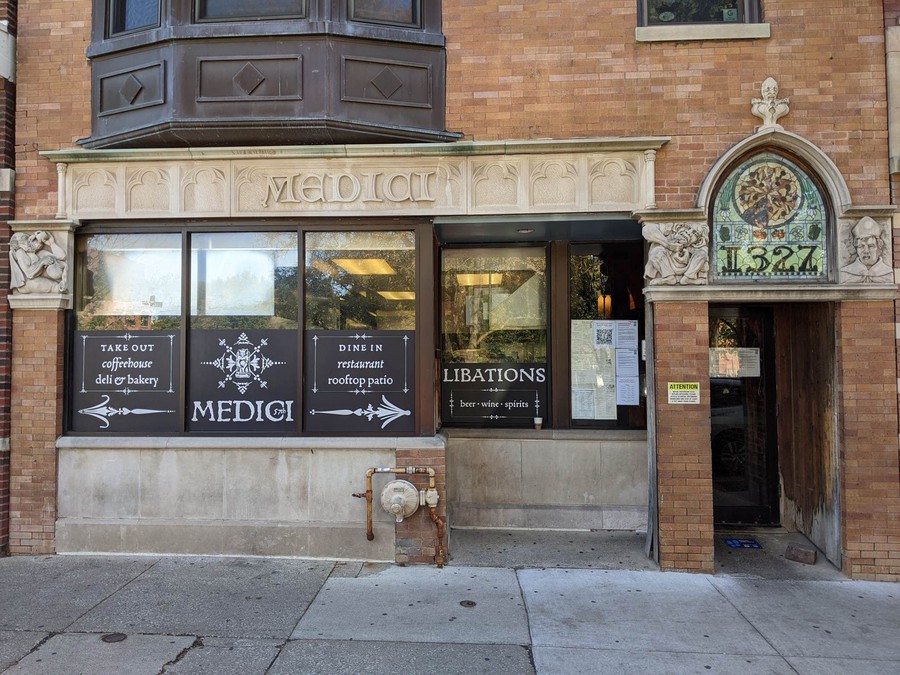 The Medici on 57th, operating a restaurant, bakery, and deli, is a Hyde Park mainstay.

Local Hyde Park businesses have faced substantial financial threats during the COVID-19 pandemic. Governor J. B. Pritzker's stay-at-home order that lasted from March 21 until May 30 as well as the University's transition to remote learning for the spring quarter caused a turbulent spring and summer for many local Hyde Park restaurants.

Several restaurants turned to crowdfunding, furloughing employees, and cutting operating hours to keep their businesses afloat as sales declined due to government restrictions on dining and the loss of customers as students left Hyde Park.

To mitigate the effects of the pandemic on small businesses, the $2 trillion CARES Act provided $349 billion in loans to small businesses, including restaurants. Furthermore, in late September, the University community, a large portion of many Hyde Park businesses’ customer bases, moved back to campus for the autumn quarter.

On June 26, the State of Illinois allowed bars and restaurants to reopen as it transitioned into phase 4 of its "Restore Illinois" plan, only to announce in late October that Chicago restaurants and bars would no longer be permitted to provide indoor dining. The new restrictions also prohibit outdoor dining after 11:00 PM, indoor congregation while exiting or waiting for a table, and in-person dining without a reservation. Governor J.B. Pritzker cited a COVID-19 test positivity rate that has nearly doubled since the beginning of October as a reason for the new restrictions.

Local restaurants cited restrictions on capacity and indoor seating, the insufficiency of CARES funding, and public concern about the safety of dining in at restaurants as significant challenges they are tackling this autumn as they look toward the winter with uncertainty.

Medici on 57th, an established Hyde Park restaurant and bakery founded in 1962, has seen its sales recover to about 60 percent of what it would have been in a normal year, according to General Manager Pablo Manriquez. Although this is a clear improvement since March when Medici was making about 10 percent of their usual sales, the business’s sales have stayed relatively constant since August, despite the return of students to Hyde Park.

Medici on 57th’s restaurant began offering in-person dining again at the beginning of August, but not without facing financial and logistical challenges. “We had to hire extra help to cover [roles] that, in normal times, you wouldn’t have to cover,” Manriquez said. For instance, Medici needed to post a staff member at the front door of the restaurant to explain health and safety regulations to restaurant-goers. Although Medici has not used any loans from CARES funding, they are making use of payroll credit to keep employees on their payroll.

As COVID-19 regulations reduced restaurant capacity and caused restaurants to rely heavily on takeout and delivery instead of dine-in orders for sale, Medici was prepared. In addition to having a pre-built infrastructure for logistics and delivery, Medici already had established its reputation in the Hyde Park community as a takeout bakery.

However, Manriquez worries that colder weather will complicate Medici’s takeout business. Capacity restrictions often require customers to stand outside in order to order from the bakery. “People have to wait in line [outside] and we cannot take everyone in right away,” he said. In order to sustain bakery sales and ensure that customers do not have to wait in the cold, Medici is currently organizing a system that will allow customers to place orders and pay for items ahead of time so that they may quickly pick up their orders at the entrance of the restaurant.

Manriquez also worried that the recent resurgence of COVID-19 infections could put a damper on business. “As the pandemic is getting worse, you see less traffic coming in. People are afraid to go to restaurants,” he said. Manriquez explained that Medici is bracing for a quieter presence in the community during the next few months.

The Promontory, a local restaurant and bar, has faced unique challenges as an established music and event venue during the COVID-19 pandemic. Venue Manager Jake Austen explained that, even before students returned to campus, The Promontory’s restaurant was “always at capacity, just with community members, because the capacity was so small.” Currently, The Promontory’s kitchen is home to El Oso, a new Mexican culinary residency by critically acclaimed Chicago chef Jonathan Zaragoza.

During a normal year, The Promontory would host large events, celebrations, and live music. “We would normally be booking at least 10 events a week.... we had three to four concerts a week, DJ nights, children’s events, community events, [and] many of them were at capacity,” Austen said, explaining that many of their events used to have 300–500 attendees.

Prior to the ban on indoor dining, The Promontory hosted smaller private events as well as socially distanced activities. These included painting events and specialized DJ sets that small groups of friends attended together. “It doesn't feel like what we're supposed to be doing and it doesn't really make enough money to sustain itself,” he said. “But it's making more money than nothing.”

The restaurant has responded to the ban on indoor dining by turning their primary focus toward takeout and delivery orders. Prior to the pandemic, takeout orders were not “something [they] would advertise, but [they] would accommodate requests.” However, they have since expanded and publicized the service. Although The Promontory did not offer delivery service before the pandemic, they are currently launching a delivery service to expand sales as dining outside becomes more difficult in the winter due to colder weather.

“The University coming back is definitely good news for any business in Hyde Park,” said Oriel Zas, general manager of Piccolo Mondo, an Italian restaurant on 56th Street. University students and affiliates usually comprise a large portion of both the staff and customer base of Piccolo Mondo.

Despite the renewed presence of these valuable groups, catering—a significant source of income for the restaurant—has not returned. “Catering is finished because the University isn’t having large communal parties,” said Zas. He explained that prior to the COVID-19 pandemic, Piccolo Mondo depended on catering large university events as a key source of their revenue. "We did maybe over 200 events a year with the University for catering, so that was definitely a large part of our business that we won’t be able to recuperate.”

Zas went on to discuss how public opinion about dining-in may affect business for Piccolo Mondo in the future. Throughout the summer, the restaurant had an open patio for outdoor seating. However, he expressed his concerns about hosting patrons at the restaurant in the winter, since the outdoor patio will no longer be a feasible seating option in the colder months.

Zas cited CARES funding as beneficial and necessary for small businesses during the pandemic but was dissatisfied that larger businesses also received funding through the act. “We all need [CARES funding] right now—with the exception of very large corporations who also took money when they shouldn't have.”