The Strange Dystopia of the Capital One Café

The University’s partnership with Peet’s and Capital One Exemplifies Its Profit-Seeking Expansion. 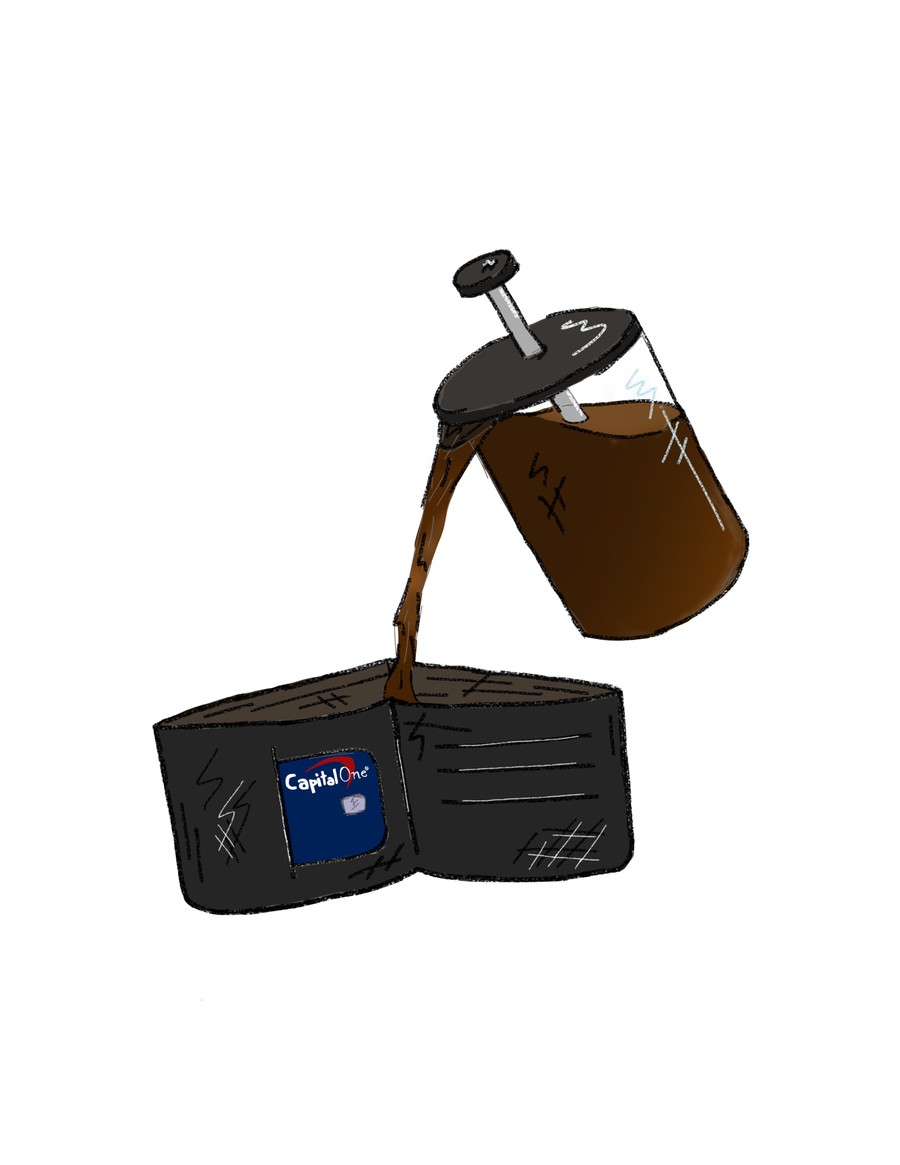 On East 53rd Street is a very special place called the Capital One Café. Maybe you’ve heard of it. Maybe you’ve stepped inside and been transported into an unreal glimpse at a dystopian future, or maybe you know nothing about the University of Chicago’s latest effort to make East 53rd Street into concept art for Main Street under late capitalism. The Capital One Café, specimen of the University’s profit obsession, once again disproves its flat PR statements about caring for Hyde Park.

The Peet’s part is right at the front. It’s just a normal coffee shop, but there’s a big ATM off to the side and you get 50 percent off for paying with a Capital One card. The Capital One part is behind all that. There are two glass fronted rooms, and a corridor runs past them into the heart of the bank. At this point I was asked to stop filming and I realized that taking a video of this weird coffee shop to show my roommates looked awfully like I was casing the bank.

Now that I’ve artfully set the scene, let me tell you what this place actually is. The Capital One Café opened last year with small fanfare in partnership with UChicago, which owns the building that houses both the café and part of the Polsky Center (the building is listed as one of the Center for Civic Engagement’s Commercial Real Estate Operations). There are Capital One Café locations across the country, including four in Chicago, as part of Capital One’s project to “reimagine banking.” This reimagining takes the form of “blending the physical and digital worlds,” according to a statement given to The Maroon last year. Apparently, while sitting in the café, enjoying that tasty cup of Peet’s Coffee, you feel just like you are inside a website, an uncanny disembodiment which typifies the paradoxical way that digital capitalism seeks to render the consumer’s body superfluous, while relying, of course, on the labour of baristas and bank employees to serve up that disembodiment, just as Uber Eats makes restaurants into websites with the help of underpaid delivery drivers. Being in the Capital One Café gave me the unsettling feeling that this place was designed to sell me overpriced coffee and then take literally all of my money in exchange for the promise of slightly cheaper coffee. Capital One card holders get 50 percent off! That coffee is like an anglerfish’s lure, that tantalizing glimmer which entices fish towards the wickedly sharp teeth. Or in this case, a credit card with an annual fee. You are not a customer of Peet's Coffee, you are a new source of profit for the bank.

The Capital One Café, this amalgam of unrelated chains, is part of the relentless concentration of capital that defines our age. The Capital One Café wants you to open an account with Capital One for cheap coffee and interior decor. A bank account is now made on the basis of its window dressing, of the lifestyle it associates itself with, rather than the interest rates it provides. This desire to make the digital real, to make a bank account into a lifestyle choice, is unsettling and forebodes an increasingly inhuman future in which appearances are all that matters. But it did not need to exist. The University, not the academic institution but the shadowy corporate octopus which looms above it, did not need to partner with Capital One, did not need to continue the relentless homogenization of East 53rd Street, the slow loss of the character of Hyde Park. The University, an institution which is ostensibly not-for-profit, could have rented the building for a breakeven rate to a local business. In this at least the Polsky Center for Entrepreneurship and Innovation could have fostered those values in the building in which it is housed.

Hyde Park is dominated by the University. It is not as if Hyde Park needed another bank, for it is already home to Chase, Bank of America, Citibank, and Fifth Third. This preponderance of banks is surely a result of the large numbers of students, many of whom are opening their first accounts and who will probably stay customers of the same bank for the whole of their hopefully high-earning lives. The Capital One Café is targeted at students and former students, with its Bay Area Coffee and website atmosphere.

The University charges an incredible amount of money for tuition, owns a staggering amount of Hyde Park real estate, runs a large private police force concerned primarily with protecting students, and makes occasional noises about benefiting its neighborhood. The Capital One Café is evidence against these performative PR statements. It should not be on East 53rd Street, should not be making people feel like they are in a website or trying to sell people bank cards that double as coffee discounts. It should be replaced with a business run by someone local or perhaps by a credit union. The University has the money to rent without turning a profit, to give back to the local community, to care at all about the neighborhoods to its south and west. The Capital One Café is indicative of the University’s lip service to community welfare while it simultaneously makes East 53rd Street into just another late capitalist Main Street.

Andrew Farry is a third-year in the College.