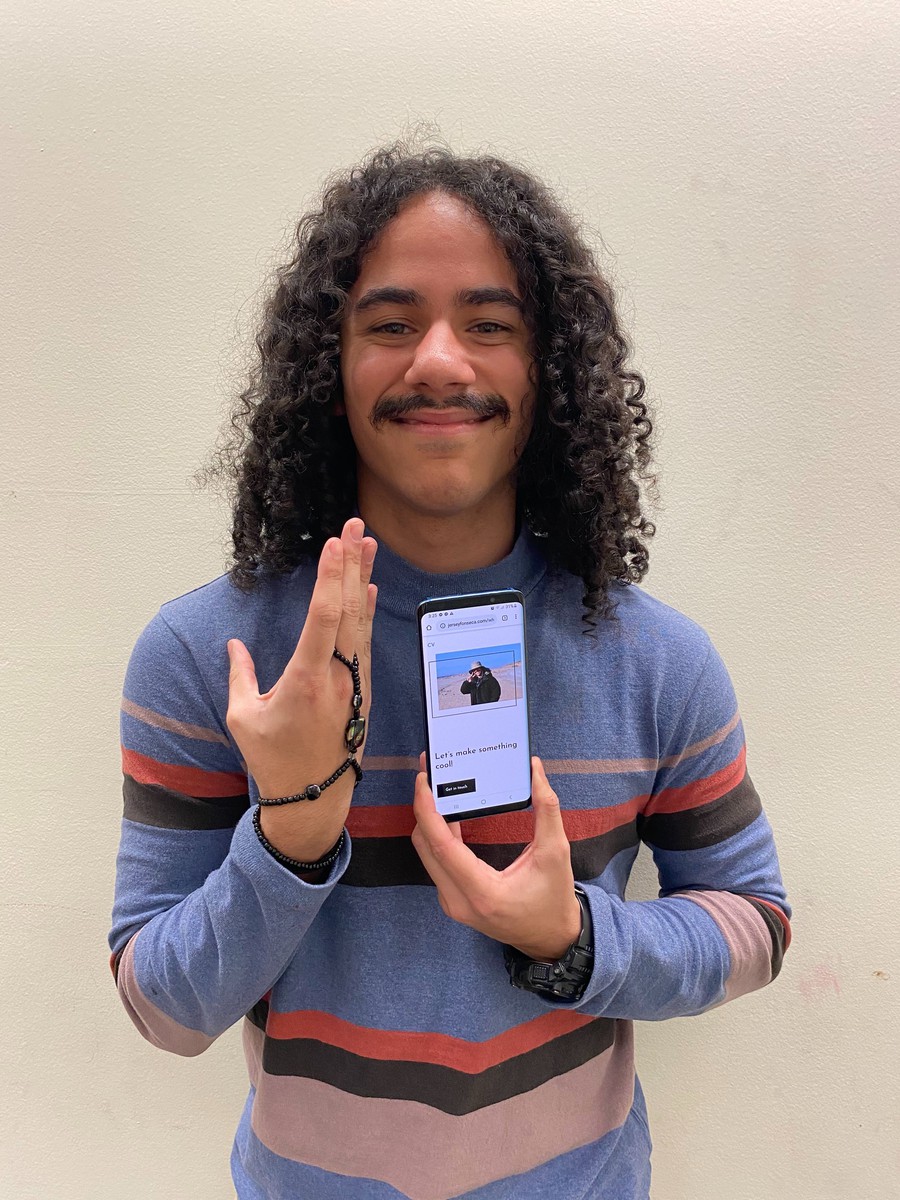 Fourth Year Jersey Fonseca shows off his implantation, which he used to open his website on his phone.

Fourth-year Jersey Fonseca, a computer science major with a specialization in human-computer interaction, installed a microchip inside his hand on January 26. Following the implantation, Fonseca intended to host an event, which he promoted on Facebook, where he would demonstrate the microchip’s function: to allow him to tap into the Regenstein Library or the CTA, by coding his cards or other functions to the chip.

Ultimately, while 245 people expressed interest on Facebook, the event never went through, but Fonseca still has the implantation. The Maroon sat down with Fonseca to talk with him about becoming a cyborg.

Chicago Maroon: Why exactly do you call yourself the first UChicago cyborg?

Jersey Fonseca: Because there’s this little microchip in my hand. [Fonseca shows his hand] It was inserted through a needle through this little scar that’s still healing.

CM: What was the original purpose for the microchip?

JF: I went to this talk and there’s this community of people called biohackers and I learned about this specific microchip.... It's pretty popular in Sweden and they put their transit passes on it and use it to pay for things and stuff. I was like, “Oh, that's pretty cool.” Originally, I got it so I could put my UCID on it, but the school won't let me do that. So I use it for other things—like if I scan it with my phone, it goes to my website.... I can also put my CTA [pass] on it, and it takes a little bit of hacking, but I can pay for things with it.

CM: Was this talk at UChicago?

JF: It was [at] the lab I work at...the Human Computer Integration Lab with [assistant professor of computer science] Pedro Lopes.

[Editor's note: Lopes and the Human Computer Integration Lab were not involved in Fonseca's idea to implant the microchip.]

CM: What was the process of implantation like, and how much did it cost?

JF: It costs like 60 bucks. [The implantation] comes with the chip itself, inside of a sterilized needle. It comes with gloves and gauze and all the things you would need. [The process] was pretty painful, more painful than they said it'd be. They said it would be like drawing blood.

CM: It must have been a really big needle.

JF: It was pretty terrifying. They recommend you go to a body piercer or like a doctor to do it, but I got my premed friend to do it.

CM: This isn’t something you can just buy off of Amazon, is it?

JF: You can. It’s from this company—I don’t like their name—but the company’s called Dangerous Things. I guess they’re appealing to a very specific demographic.

CM: Were you worried about any health hazards associated with it?

JF: It's like the same type of microchips you put in like your pets. In terms of how my body would react, I knew that would be fine. The part I was most worried about is getting infected, because we did this in my dirty room.... It's been fine thus far and I was worried it would hurt, but I can't really tell that it's there or feel it unless I'm going like this. [Flexes hand]

CM: How did you exactly decide where to put the chip? Are there any other places people typically put a microchip if they were to use it?

JF: There's also your forearm, but I just thought this was the most convenient way to go through my day-to-day. Also, the orientation is really important, so if I have to turn to like 70 degrees with my forearm, it's a lot harder than just using my hand.

CM: How does the mechanism work, exactly? Is it different depending on what you’re using it for?

JF: So you can encode multiple different types of information [onto the chip]. You can code a URL and a serial number that'll tap onto the CTA, but you can't have two serial numbers [coded onto it] at the same time, so I can't have my UChicago ID and my CTA [pass] at the same time. I would have to choose, and switch off between them, and I could write to it from over the air.

CM: I just want to be clear on the premed friend. Was she just a premed? Did she have any experience?

JF: So, even worse. She used to be premed. [laughs] She used to inject mice and stuff. Okay. She wasn’t totally down for it, but I ended up convincing her. She’s like my best friend.

CM: How long do you think you’ll be using the [microchip] for?

JF: Theoretically, when I graduate and I have my own place, I could get a lock that I could make compatible with this. If I have a car I could start it with this, a modern car, so: Until death do us part.

CM: What is the maximum capacity for [your microchip]? Is it one URL, one serial number, and that’s it?

JF: Technically I could have two because this chip is twice the size of some of the others [on the market]...they have because there's two frequencies...125 kilohertz and 13 point something. And those are just the two most popular, widely distributed throughout the world. So I have both and theoretically, I can have a URL and two serial numbers.... I can't have two 125 kilohertz [frequencies in the chip], but I can have one 125 and a 13 kilohertz. Imagine they're like two different rooms and I could put one in each room, but I can't put two in one room.

CM: Is how the signal works similar to how Bluetooth works, or is it completely different?

JF: It is [completely different]. What happens with [the microchip] is when this enters a magnetic field, which is constantly being emitted by the receivers that you tap your card onto, once that enters that signal and detects, it, it sends over whatever data is in it. That's how radio frequency identification works.

CM: How do you encode [the radio frequency] into your microchip?

JF: There's actually a bunch of apps for this. Can I show you? It's literally called NFC tools.... I could just put in whatever I want to write to it. And the same way I can read by putting things up to it, I can write to it.

CM: Do you foresee a future where you might want to alter your body even more?

JF: Oh yeah, for sure. I definitely want more. I've been reading a lot about other cyborgs. I read about this guy who has a hotspot in his leg. It's very sick, but then I looked at it, and it's like this huge block and I was like, “Oh…I don't want that.” There's this other guy...he has an antenna coming out of his head because he was color blind, and depending on the color that the camera from the antenna sees, [the antenna] sends some type of signal that he can use to decipher color. I wouldn't do anything that extreme unless it was pretty tiny and discrete. [There are] other [implantations] I was thinking of getting that sound kind of dumb, but [there’s] one that if you hover over a magnet, it'll light up. I think that'd be pretty cool, but it's totally impractical. It serves no purpose at all. Other ones I am seriously considering [are] like [ones that deal with] temperature and blood level.

An earlier version of this article misspelled the last name of assistant professor Pedro Lopes.