Activists stage a protest at the Mayor's Office over the Obama Presidential Center. 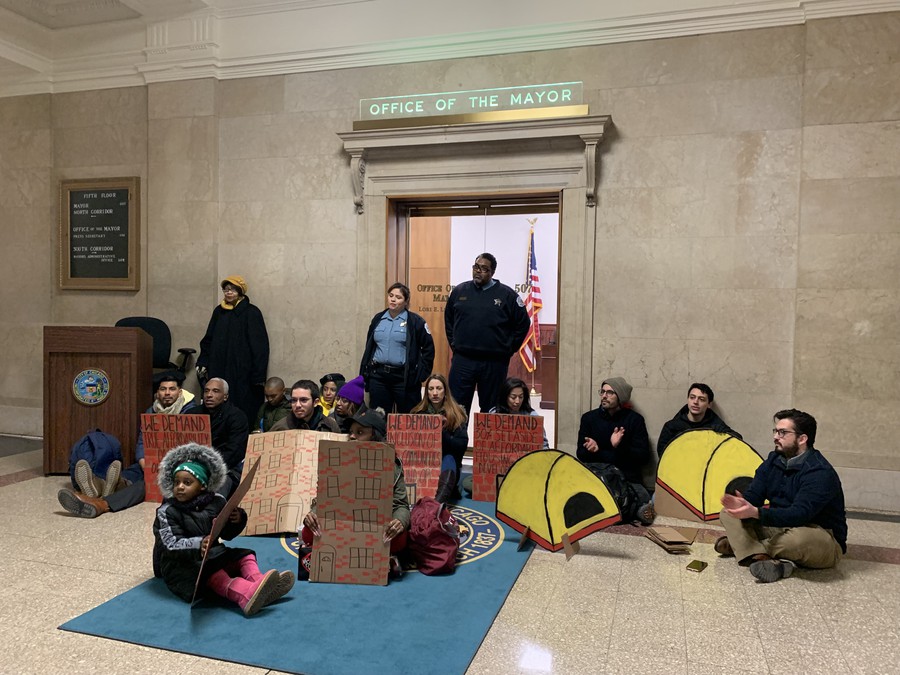 Activists sit in at Mayor's Office for OPC CBA

The CBA Coalition opposes the ordinance because they believe it would not do enough to protect affordable housing in the community.

After about an hour and a half of chanting from community members for affordable housing, City officials brought Coalition members to the mayor’s office to discuss their concerns. Ultimately, mayoral staff agreed to a formal meeting with the CBA Coalition ahead of the draft ordinance’s introduction to City Council.

The group stayed in front of the mayor’s office for five hours after the announcement of a meeting, according to CBA Coalition member Laurel Chen, who is also a member of UChicago Against Displacement.

In a written statement, the mayor’s office said, “We are committed to ongoing discussions with these stakeholders to make sure the concerns of the community are reflected in any affordable housing or economic development solutions for Woodlawn, while ensuring that there are no unintended consequences for the community.”

However, Alex Goldenberg, a CBA Coalition Member with Southside Together Organizing for Power (STOP), was not enthusiastic about the prospect of another meeting.

“More meetings with staffers is nothing to celebrate,” Goldenberg said to the crowd. “They’ve known exactly what we want for three years.… What we’re doing matters. We are forcing them to address our concerns, they’re not moving the way we want them to move yet, so we’ve got to keep doing what we’re doing.”

Hightower told the crowd that the City needs to commit to an ordinance that will address housing concerns in neighborhoods surrounding Woodlawn, set aside 30 percent of new development for affordable housing, and meet the other main requirements of the CBA housing ordinance that was introduced in July 2019 by 20th Ward Alderman Jeanette Taylor and Fifth Ward Alderman Leslie Hairston.

“We know what we deserve. We’re not going to get pushed out by these developers,” Hightower said.

Taylor showed up to greet and hug her constituents at the event. She helped to facilitate the meeting between CBA Coalition members and the mayor’s office, and reiterated that she will not vote for an ordinance that her constituents do not support.

“We’ve been given some points, but we have not gotten the details of the ordinance they’re introducing.… I don’t have the ordinance. I have a PowerPoint presentation that hits the points of some of the things that came from the CBA [Housing Ordinance], and the CBA Coalition wants the details,” Taylor said to members of the press.

In addition to Taylor, 25th Ward Alderman Byron Sigcho-Lopez and 49th Ward Alderman Maria E. Hadden, both members of the City Council Committee on Housing and Real Estates, spoke to the crowd in support of their efforts.

“They [the developers] have been writing the laws for way too long. This is our time.… Let’s make sure that we support the Obama Community Benefits Agreement and we’re gonna fight tooth and nail in every single community,” Sigcho-Lopez said.

Goldenberg told the press the sit-in is the beginning of more actions from the CBA Coalition ahead of the introduction of the City proposal. The group is also hoping to rally more aldermen in support of the CBA Housing Ordinance.