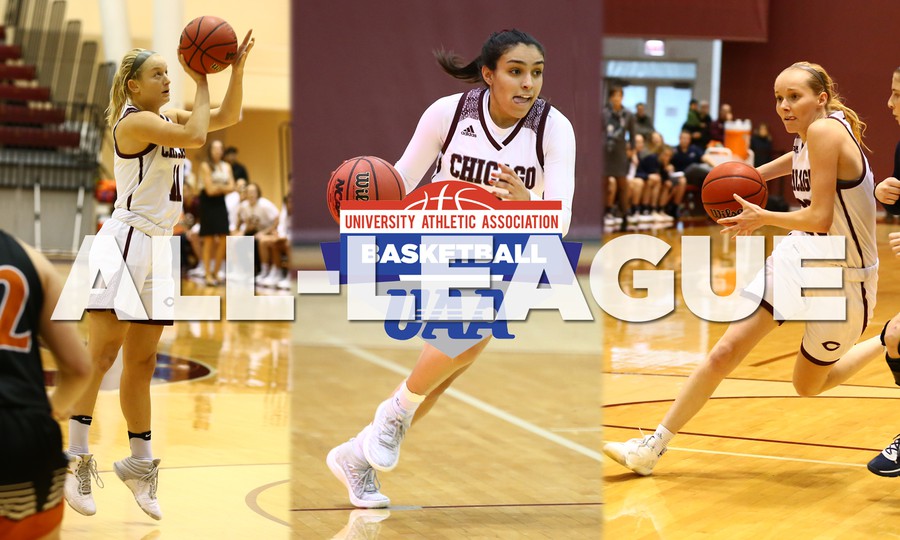 The three of them won all-UAA together

107 career games, countless awards and accolades, and over 1,000 points…each.

Due to their stellar 2019–20 season and careers as members of the University of Chicago women’s basketball team, fourth-years Miranda Burt, Mia Farrell, and Taylor Lake have been named by The Chicago Maroon as the Female Athletes of the Year. To say that they have left a mark on the program is an understatement.

Farrell completes her four years with over a dozen records to her name including, No. 2 in free throws made, No. 4 in three-point percentage, No. 10 in steals, and No. 5 in points as well as in points for a single season. This past season she was also named First Team All-UAA and Co-Defensive Player of the Year in addition to Second-Team All-Region by D3Hoops.com.

And finally, Lake graduates as No. 3 in points, No. 4 in field goals made, No. 9 in blocked shots, No. 10 in rebounds, No. 11 in steals, and many more. For the 2019–20 season, she was named to the First Team All-UAA and as the UAA Player of the Year. She was named a Third-Team All American and First Team All-Region by D3Hoops.com as well.

Oh, and did we mention that all three of these amazing female athletes are members of 1,000-point club?

But regardless of their names written in the record book, their class has cemented its legacy through its attitude and dedication to the team, which all three greatly credit to fellow classmate Nireet Dhillon. According to Burt, “I think we all want our legacy to be hard work and a deep dedication to each other on the team—if we were able to leave that, then I have no doubt that those after us will have even more success.”

Lake echoed this sentiment and remarked, “We made history and those moments I will forever cherish as a testament to all of the hard work and dedication each player committed themselves to in order to accomplish all that we had. All you can ever hope for is to make the slightest difference in something you put so much effort into and to know that this group of seniors has done that just that feels amazing.”

Reflecting on her time here, Farrell added, “I could not have done it without my fellow seniors and I am overjoyed by the ways we were able to lead our team over the past four years. It was one special group of women and it feels like a perfect ending to a great four years for us.”