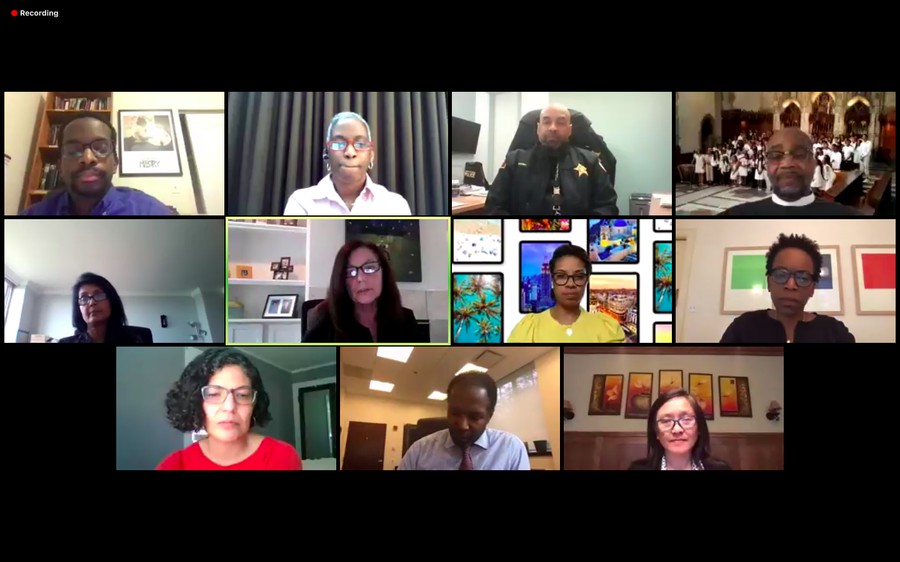 Panelists at a webinar hosted on Thursday evening by Provost Ka Ye Lee, “Taking a Stand Against Racism: Our Shared Values and Responsibilities.”

Panelists implored the University of Chicago to reckon with its private police force and its history with the surrounding South Side community at a webinar hosted on Thursday evening by Provost Ka Ye Lee, “Taking a Stand Against Racism: Our Shared Values and Responsibilities.”

Some speakers offered suggestions on how to move forward, such as creating a “human diversity” core curriculum requirement and fostering “spaces where we can offer empathy.”

But others turned their attention to the University’s broader role in perpetuating racial injustice.

Sonya Dinizulu, assistant professor of psychiatry and behavioral neuroscience, was one of several panelists to emphasize institutional accountability, saying that UChicago must “own” its harmful influence both on the South Side and on the mental health of its Black students.

“We need to look at ourselves as an institution of how much we played a role in oppression and structural violence in the community,” Dinizulu said. “I am asking my colleagues who are on this call, this Zoom presentation, to hold each other accountable. Those who are in leadership positions, those who are in the dominant group—to hold us all accountable to make these changes. Otherwise this is a waste of our time."

Vice President for Civic Engagement & External Relations Derek Douglas framed this issue as a disparity between the ideals of community engagement and racial justice, which he said University leaders “believe in…deeply,” and the execution of these ideals.

Douglas said that this has created valid distrust of the University among the surrounding communities. “We are not fully living our values as an institution.…We need to grapple with the history with the community,” he said. “There are trust issues there. And they’re there for a reason.”

Dean of Rockefeller Chapel Maurice Charles was one of several Black men on the panel who recounted experiencing racism from the University of Chicago Police Department (UCPD). He described his perpetual sense of betrayal upon learning of injustices committed by police, such as the 2010 arrest of a Black male student in the Regenstein Library.

“How did I feel when those officers robbed George Floyd of his breath? Turning a deaf ear to his cries for mercy? I felt betrayed. The same disgusting betrayal as when I learned here, as a doctoral student, how a Black student in the College was pressed to the ground in a choke hold. His initial violation? Making too much merriment with his friends in the lower level of Regenstein library,” Charles said.

“It’s the same old betrayal as a master’s student in my 20s, when UCPD officers would follow me all the way home after class,” Charles said. “I love this university. It’s why I keep returning here. But you need to know that when the recruiter asked why I was hesitant to return here as Dean of Rockefeller, I responded with two words: the police.”

UCPD Chief of Police Kenton Rainey was among the last panelists to speak. He emphasized that he has previously advocated for police accountability and implored listeners several times to read President Obama’s 2015 “Task Force on 21st Century Policing” report.

He also recommended that those dissatisfied with the present state of policing exercise their right to vote. “If you are mad and want to stand up and fight back, then organize…but let a ballot be your weapon of choice. If those in power can't get it done in the area of police reform, then use your weapon. Vote in every election. Elect people who will serve your interests,” Rainey said.

Student-activist campaign CareNotCops responded to Rainey’s remarks on Twitter, posting, “Chief Rainey, we HAVE educated ourselves on reform; that’s how we know it doesn’t work.”

The group also pushed back on Rainey’s suggestion that listeners vote to address issues in policing.

“As students at this University, we don’t get a vote as to whether the UCPD is funded or not,” the group tweeted. “We don’t want your empty words or publicity stunts; we want your resignation. #AbolishUCPD.”

CareNotCops declined to offer further comment to The Maroon.

Dinah Clottey, a second year in the College and member of the Organization of Black Students (OBS), wrote in an email to *The Maroon* that she is not persuaded by the University’s newly stated commitment to racial justice, after student advocacy had long fallen on deaf ears. For this reason, Clottey wrote, Lee’s request that students help the University “develop specific solutions” to the issues at hand added insult to injury.

“Officials are not listening to students.… This is what marginalized students have been doing for years. UCU [UChicago United] was created to come up with solutions to racism on this campus,” Clottey wrote. ‘Though students have made demands in the past, there has been little effort by the higher administration to listen or take action on the students' wishes.”

Fourth-year Jay Gibbs, a member of OBS, noticed a peculiar silence in Rainey’s speech: any mention of UCPD’s current actions. Rainey’s speech tried to “obfuscate who he is,” Gibbs said, portraying himself as someone who “happens to be involved with policing” rather than the police chief responsible for UCPD’s ongoing and controversial role.

“It almost seemed like there was this constant dancing around his own world right now,” he said. “The UCPD is part of the oppression of protests, the UCPD is part of patrols.…To not mention that at all, [when] you have the police chief in the webinar, is almost insulting to me.”

Gibbs also felt that the University’s active role in perpetuating racism and “causing that pain” that Black panelists mentioned was similarly minimized, present only as a “subtext” of the webinar—even as it was highlighted by Black people on the panel—rather than an overt conclusion.

Gibbs believes that aside from the compelling testimony of a few speakers, namely Dinizulu and Charles, the event served more for the University to make a statement than to constructively engage with community members, as evidenced by the disabled Zoom “chat” box.

“They weren't taking questions, there weren't really any comments, there was no space for students to ask questions, not even fielding a general feel of what students wanted to hear,” he said. “I think to a certain degree it was performative. It felt as though they were trying to make an effort to say something, and they wanted to fill time, as opposed to actually engaging.”

According to one panelist, despite the fact that the event was announced the same day it took place, over 2,000 people signed up to attend the webinar.