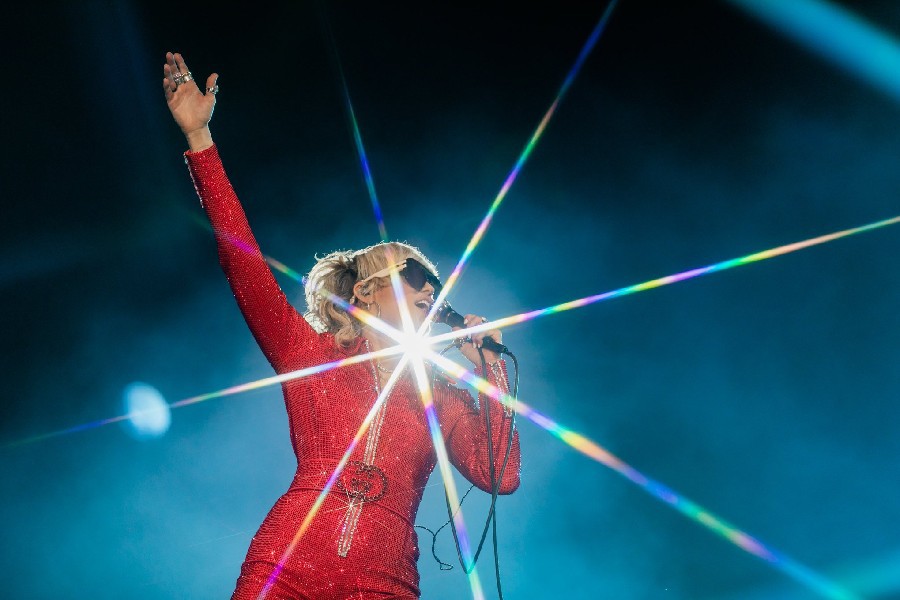 By Kate Lu   and Veronica Chang

For four days, it looked like a return to normal. The smell of weed and sweat filled Grant Park, social distancing ceased almost entirely (although your resident reporters were sure to stand in the shade, far away from any mosh pits), and masks were replaced by drunk foolhardiness. Lollapalooza 2021 marked one of the first major outdoor music festivals since COVID-19 swept the world, though whether it marks recovery or the start of a new COVID-19 variant is the question of its legacy.

From Thursday, July 29 to Sunday, August 1, there were highs and lows and everything else in between. The Delta variant dominated the news from day one with images of packed, maskless crowds, and countless rumors of fake vaccination cards and COVID-19 tests circulating. Machine Gun Kelly made a surprise appearance on Saturday, Limp Bizkit called for the crowd to get vaccinated, and the cancellation of DaBaby’s headlining performance on Sunday due to the rapper’s homophobic remarks at the Rolling Loud festival in Miami on July 25 kickstarted a wave of similar cancellations and hilarious jokes at DaBaby’s expense.

Festivalgoers and performers alike were optimistic—ebullient, even. From headliners like Miley Cyrus and Lauv to smaller acts like Cavetown and mxmtoon, the theme of the festival was celebration: celebrating a return to live music, to coming together, and to soaking in the atmosphere of an outdoor performance. Cyrus’s headlining set was a particular standout, with an array of her older classics like “Wrecking Ball” and “The Climb” (which the crowd happily scream-sang along to) in addition to covers of songs that inspired her as an artist, notably Blondie’s “Heart of Glass.” Clad in sparkling red, Cyrus spoke about how artists learned in the past year that they are nothing without fans and joked that, “I am who I am today, in my customized, bedazzled Gucci jumpsuit that was flown personally from Italy, because of you!” And, of course, it wouldn’t be a perfect opening night without “Party in the U.S.A.”—complete with an ocean of people waving their arms at “hands up” in the largest party in the U.S.A. at that very moment.

Other highlights included Tyler, the Creator, whose set was a uniquely artistic interpretation of his journey to where he is now (complete with props, fire, and costume changes), and Megan Thee Stallion, whose electrifying performance drew one of the largest crowds of the weekend. Although some of her tracks blurred together in unmemorable sameness (think of listening to her B-sides as taking shots; you hype yourself up and the energy is great and then all of a sudden it’s all gas no brakes and you just want to tell the driver to slow down or pull over so you can puke at the side of the road), the rapper’s fierce charisma kept the crowd on its feet and screaming for the duration of her set.

Of course, this intensity didn’t last the whole weekend. Some of the smaller sets during the day held more intimate atmospheres, which were great ways to find new songs to add to our Spotify playlists (shout-out to Sarah Barrios for the catchy “IH8EVERY1” and an excellent cover of Avril Lavigne’s “Sk8er Boi”). Our favorite acts, then, were the ones that managed to captivate crowds consisting of both loyal fans and curious onlookers. Complete with excellent vocals, good vibes, and eye-catching jumbotron graphics, Young the Giant’s performance was particularly memorable: The band’s tireless energy fed the zealous audience even as the lead singer remarked on the passage of time (10 years had passed since the band’s first performance at Lollapalooza in 2011).

Despite the announcement of a mask mandate for indoor spaces on Saturday and the looming backdrop of the Delta variant, the colorful, wackily dressed, and upbeat crowds at Lollapalooza showed no signs of the weariness brought upon by the pandemic. It’s worth considering, then, whether artists’ acknowledgements of the pandemic (many spoke about the difficulty of the past year, including Journey, who gave a speech to thank essential workers) were performative measures at odds with their encouragement of packed, maskless crowds. The elation of being free to get lost in the music was buoyed by a sense of the pandemic being “over”—but was it?

Still, in the end, Lollapalooza was a celebration: a celebration of perseverance and coming together as crowds cheered at every occasion for artists both seasoned and emerging; a celebration of music that connected us even when apart, with several familiar pandemic-born songs finally making their live debuts; and a celebration of possibilities, because there’s nothing like yelling Journey’s “Don’t Stop Believin’” at the top of your lungs and hearing the rest of the crowd yell-sing with you, then sprinting to the opposite end of the festival to catch the last chorus of Post Malone’s “Sunflower.”