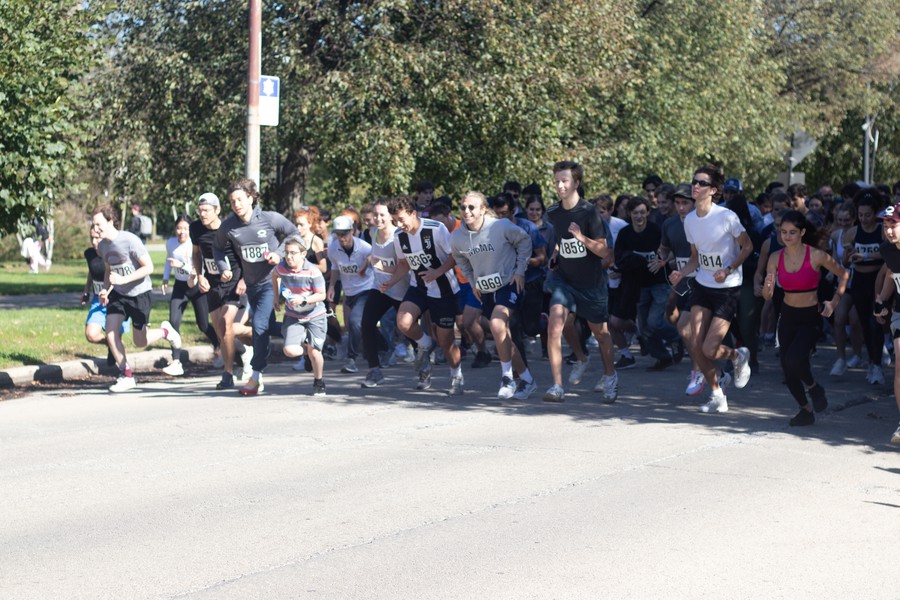 Runners gathering before the start of the 5k.

Cogan, the first speaker and principal organizer of the run, was Lewis’s best friend and AEPi brother. He explained that the inspiration for the 5K stemmed from Max’s passion for taking daily runs or walks around campus.

“Today we run or walk in honor of the most avid runner and walker I have ever known,” Cogan said during his speech. “Max was the kind of person to walk 30 minutes from 61st Street to Whole Foods for a box of LaCroix in the morning and return again in the afternoon at the same ridiculous speed. This comes despite the fact that Max lived two minutes away from a Jewel-Osco that carries plenty of seltzer.”

Cogan encouraged attendees to try not to be somber during the memorial. Instead, he urged them to enjoy the food and music and to celebrate Max’s memory.

“Today takes us one step closer to a true angel,” Cogan said. “When we cross that finish line, I promise you Max will be there with us crossing it too. Today is about having fun and celebrating Max. The fact that over 150 college students are out running on a Sunday [afternoon] speaks volumes about how special Max was and how strong of a legacy he has left behind.”

Zvi, another AEPi brother, spoke after Cogan. He praised Lewis’s ability to uplift the spirits of others and his constant willingness to help others with no expectation of getting anything in return.

“If you are down, Max would do everything he could to make you feel better,” Zvi said. “I’m sure that this grief I am feeling would be much easier to get through if Max were here to help me through it.”

Lastly, Liu told the audience of both her academic relationship working alongside Lewis in Promontory Investment Research and their personal relationship as friends.

“Through my interactions with him in Promontory, I immediately picked up on and was inspired by his genuine intellectual curiosity and desire to learn,” Liu said. “Whenever we had a club presentation or speaker, you could always rely on him to ask an interesting and thoughtful question.”

After the speeches, the 230 runners took their starting positions just north of the ice rink on Midway Plaisance. The route took runners on a lap of the Midway Plaisance, bounded on the east by South Dorchester Avenue and the west by South Cottage Grove Avenue.

In an interview with The Maroon following the event, organizer Eddie Fitzpatrick, a close friend of Lewis’s and his AEPi brother, was overjoyed by the event’s success.

“Our initial goal was about 200 runners,” Fitzpatrick said. “We ended up with 230 sign-ups at the end of the day which was absolutely fantastic.”

Upon completion of the course, runners and spectators enjoyed live music and catered food and drinks. Cogan encouraged attendees to donate to the Max Solomon Lewis Memorial Fund through the online GoFundMe fundraiser.

All proceeds from the run, including those from fundraiser started in Lewis’s memory in July, will go toward a variety of charitable causes, including Hillel, Chabad, gun violence prevention organizations, and the Rivkin Center, which Lewis’s family founded 25 years ago in honor of his grandmother who passed away from cancer.

“Everything came together really well,” Fitzpatrick said regarding the organization of the run. “There were no major hiccups. The reception and the live music [were] great, and it was really awesome to see everything come to fruition. It could not have been a better day.”

“The event was beautifully orchestrated,” said runner and AEPi brother Gavriel Karsch after the 5K. “Zach Cogan took it upon himself to organize this whole thing, and he worked very hard, night and day, to make sure it went smoothly. This is an awesome way to show support for a brother. The fundraiser has raised a lot of money to prevent things like this from happening again, and that’s why I came.”