Whalers in the Arctic! 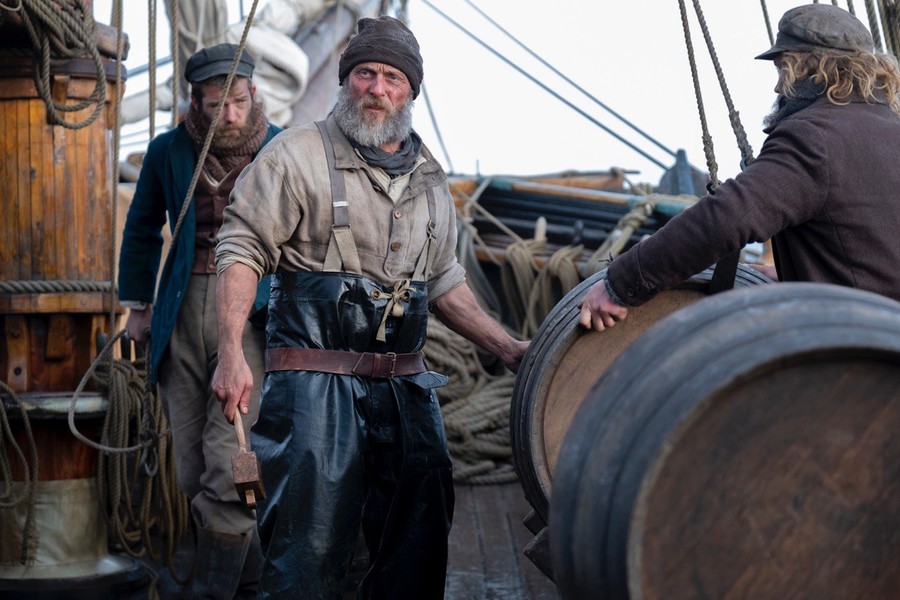 Roland Møller as Otto in "The North Water."

To be perfectly honest, I was convinced that I had to watch The North Water before having seen a single clip of it—the concept was enough for me. Whalers in the Arctic! It promised to be a perfect synthesis of two niche topics I had already become obsessed with because of adjacent media. The first was the premiere season of AMC’s anthology series The Terror, somewhat loosely based on a novel, itself loosely based on the infamous Franklin expedition to find the Northwest Passage. The expedition, like many contemporary Arctic expeditions of its kind, ended in complete disaster, with the fate of many of its 129 men still not entirely clear, though the majority of deaths have been attributed to a variety of causes from lead poisoning to cannibalism. The second was Herman Melville’s classic novel Moby-Dick, a depiction of 19th century whaling so seminal that it is nearly impossible to talk about any other media about old-time whalers without bringing it up at some point. These three works appeal to me on the same basic level: tense, often homoerotic encounters between repressed Victorian-era men forced into tight spaces defined by strict, absurd hierarchies as they hurtle towards their doom.

And yet, while The North Water certainly delivers on these expectations, I couldn’t help but feel something lacking throughout its five gruesome episodes. It was difficult for me to put my finger on at first, but its rather abrupt, tonally confusing ending helped elucidate the issue.

In order to understand what The North Water is missing exactly, it’s necessary to understand what it contains in abundance. The first thing the audience sees is an Arthur Schopenhauer quote—“The world is hell, and men are both the tormented souls and the devils within it”—which sets the mood rather well for everything that is to come. Our focus generally bounces back and forth between Patrick Sumner (Jack O’Connell), a traumatized army medic who “simply followed orders” his way into a court martial and a highly inconvenient addiction to the opium laudanum, and Henry Drax, played by a nearly unrecognizable Colin Farrell, who is almost immediately introduced as a man who starts bar fights for fun and murders men on the street for hardly more. When the two men find themselves aboard the same Arctic whaler leaving Britain with the destruction of the vessel purposefully written into the captain’s shadowy plans, an irreconcilable tension forms between Sumner and Drax. Sumner is consistently compelled to do the right thing regardless of the situation, from standing up for a fellow crewmate accused of rape and murder due to his known homosexuality to arguing with a small-minded missionary over whether or not the local Inuit are in desperate need of salvation. Drax, on the other hand, tells Sumner to his face that he simply doesn’t think before acting on his basest, most sadistic impulses.

What this central relationship primarily provides is a lot of violence and gore. Drax bashes the captain’s skull in, while the second-in-command who takes up the captain’s job, Cavendish (Sam Spruell), shoots a disobedient crewman not long into a group attempt at survival once the ship goes down. If this weren’t enough, Drax later kills the new captain, and even Sumner, already haunted by the guilt he carries around from being unable to protect an innocent child in India during his army days, bloodies his hands afresh by the close of the series. Each episode title only further underlines the core truth that this is a world of betrayal and selfishness: “We Men Are Wretched Things,” “The Devils of the Earth,” and “To Live is to Suffer.” Even when characters are not physically turning on one another, they consistently show their propensity for greed. Cavendish appears on screen seemingly only to plot petty theft with Drax, bark out orders, and display shockingly (even for a 19th century Brit) outright racism towards the indigenous peoples encountered by the starving crew. Brownlee (Stephen Graham), the original captain, is hardly ethically superior, fully willing to endanger the lives of his men for the sake of insurance money. Other than designated protagonist Sumner, the only member of the crew who seems to stand above the moral fray is the Danish harpooner Otto (Roland Møller). Otto nurses Sumner through getting over his laudanum addiction once the supply vanishes, and in a speech delivered much like some sort of sage, long-bearded wizard, reminds the rest of the men that the only monster they have to fear is the evil they’ve brought along with them.

Despite this consistently dark perspective on human nature and the moral landscape that the characters inhabit, The North Water chooses an ending that is surprisingly forgiving, but ultimately tonally unsatisfying. After wintering with a missionary and his Inuit acquaintances, Sumner makes his way back to Britain, finally vanquishes the rogue Drax, and gets revenge on the profiteering capitalist who has orchestrated crucial parts of the plot. Having accomplished all this, Sumner takes the advice he’s been given twice now—first after getting kicked out of the army, and second before sending a bullet through his final enemy—and “starts afresh,” escaping into wealthy, fashionable obscurity in Berlin. It’s difficult to call this a happy ending, considering all that Sumner has endured, but it’s certainly designed to be a rewarding one. Sumner has always been the good guy, the audience surrogate, and it only makes sense for him to have finally earned a degree of freedom from his traumatic past.

Perhaps Sumner’s decision to return home after finding a community in the Arctic that welcomes him into its fold was so startling to me because of what a departure it was from a narrative I’m used to. I mentioned the first season of The Terror earlier not just to explain why I was so drawn to a new show about Arctic seafaring, but also because of how eerily the two series parallel one another. In The Terror, the character closest to serving as an audience surrogate, Captain Francis Crozier (Jared Harris), finds himself in a somewhat similar situation to Sumner’s. Unlike Sumner, he’s the only white man around, but also unlike Sumner, he already knows how to passably speak Inuktitut, which plays a role in his decision to never return to European civilization. Sumner and Crozier are similar in their sworn secrecy—when both are prompted by their countrymen to tell what they know about the demise of their crewmates, both make the active decision to keep that knowledge, which would easily be plastered across a Victorian tabloid, with them to their graves. They are perhaps also united by the subtle comment their sole survival makes on the deeply prejudiced society they come from, where their Irish origin marks them both as outsiders among the crew long before they leave England. The conclusion of Crozier’s story, while not entirely dismal, is appropriately somber. There is no escape from the environment that swallowed up his comrades, and if their story is going to die with him, then it feels fair that he should suffer some sort of death within the narrative as well, even as his life is physically preserved. The events of the series, often just as bloody and morally perverse as everything that happens in The North Water, have refused to let any of its participants carry on elsewhere, as though nothing important had happened at all. This refusal comes in the form of death for everyone but our chosen survivor. While ostensibly of his own making, his decision to remain in the Arctic is the only satisfying ending for this narrative.

And yet, the most crucial difference between these deceptively similar series is that while Sumner gets his “happy” ending and Crozier is granted life and nothing more, The Terror is interwoven with the far more optimistic view on human nature. Both shows never shy away from the darker aspects of humanity. However, while the moral spectrum of The North Water generally ranges from “self-serving bastard” to the still far from saintly Sumner, The Terror contains a kaleidoscope of moral actors. It has characters from the bigoted and desperate mutineers who end up rallying around a figure whom even Henry Drax would be horrified by, to the devastatingly kind but also devastatingly naïve believer in the right of imperial conquest who serves as the expedition’s assistant surgeon. It’s this complicated character, Harry Goodsir (Paul Ready), who I think helps elucidate the fundamental reason why I found myself looking back wistfully on The Terror while remaining unconvinced by The North Water’s outlook. When Goodsir, pushed to the most desperate measures imaginable, has his last on-screen conversation with a friend, he concludes that “this place is still beautiful” to him. This is in spite of everything that “this place,” the harsh landscape of the Arctic Archipelago, has brought upon him and his friends. Goodsir’s final scene is interspersed with close-up shots of local flora, properly evoking the sort of wonder that a young scientist would feel in exploring new climates. When Otto, one of the strongest forces of good against evil that The North Water provides, meets his end, it happens off-screen and is only mentioned to the audience briefly. Sumner may live to find a new occupation in a new country and perhaps even settle down and start a family who will never know the horrors of his past, but the world he navigates is one that seemingly none of its inhabitants find beautiful.