The Terrors of Traffic

Cars in Hyde Park are a real danger undermined by the University’s portrayal of a violent South Side. 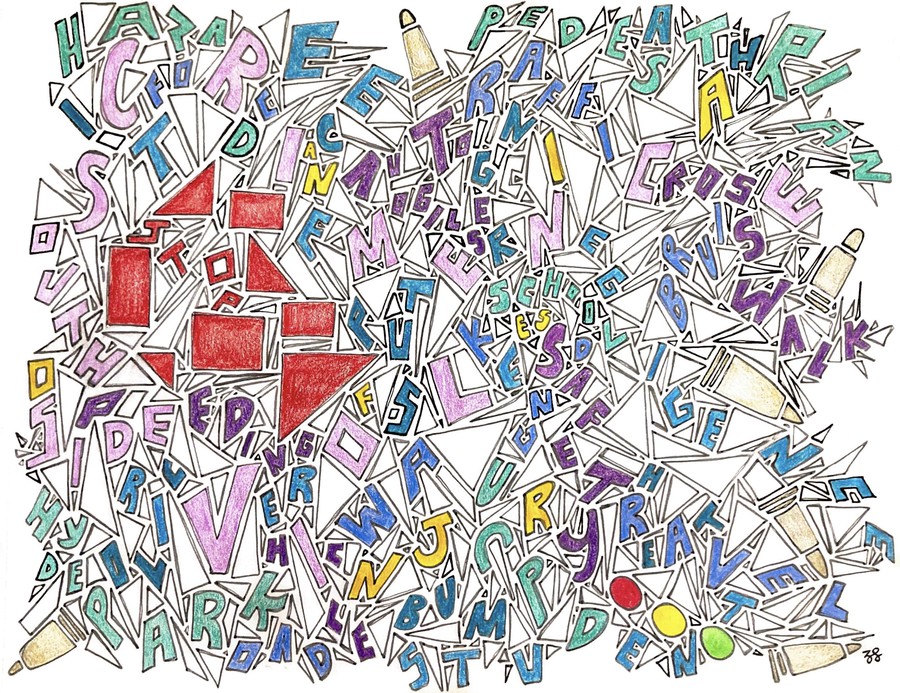 We had committed none of the classic pedestrian blunders. It was 3 p.m., we were wearing sweaters in primary colors, drinking only coffee, crossing legally after looking both ways down a mostly empty street. But when a car ran into my friend and me on 55th street a few weeks ago, I was not surprised. After the headlight left my hip and the driver barreled through the next stop sign, my first thought was, “how hasn’t this happened before?”

To clarify, we were both fine. I had an ugly bruise on the side of my leg that was only tender for a few days. Even though the car had made contact with us both at a not insignificant speed, it felt melodramatic to say we had been hit. Bumped, we called it. We had dodged anything worse.

While the jokes about jumping in front of shuttles or UCPD cars for comped tuition are just that, it is alarmingly easy to get hit by a car in Hyde Park. I would need several hands and maybe a few feet to count the number of anecdotes about student-car altercations I’ve heard over four years at this university. Cars weaving into bike lanes; mangling skateboards; bruising my legs, rib cages, and pride. The ubiquity of these accidents and almost-accidents speaks volumes. Cars are a widely ignored campus safety hazard, an issue overshadowed by violence that pits students against South Siders in University press releases and police reports.

Between 2014 and 2018, Cook County ranked sixth in pedestrian traffic deaths in the United States. 2020 saw a significant uptick in pedestrian deaths despite a sharp downtick in daily driving, with Illinois traffic fatalities reaching a 13-year high. The jokes about Chicago drivers are endless and, as many insurance claims will prove, rooted in truth.

While Hyde Park is ranked the 28th most walkable neighborhood in Chicago with a WalkScore of 86 out of 100, it is important to note that WalkScore is not an indication of walk safety but rather a measure that considers the number of amenities within walking distance, block length, intersection density, and population density. Campuses have to accommodate thousands of rooms’ worth of student housing, student-friendly cafes and restaurants, grocery stores, and transit stops in order to attract the never-ending stream of students, so any university campus and its surrounding neighborhood report high counts of amenities and high population density, instantly boosting WalkScores.

Although WalkScore doesn’t prove pedestrian safety, neighborhood audits by the Chicago Department of Planning definitely give us a better idea. Hyde Park streets have been highlighted as potentially dangerous on multiple counts. Complete Streets Chicago identified 55th Street for multi-million dollar pedestrian safety improvements, but the original report, written in 2016, boasts before pictures that look identical to the street today. Improvements have not been made to Hyde Park’s most hazardous multi-lane road, and as per Complete Streets’ website, they are not in progress either. Pedestrian safety — an urban design problem — has a clear urban design solution, one the University has not publicly encouraged or even spoken on.

Although we’re not quite in the UChicago of When Harry Met Sally, where cars could idle right outside Harper, the University administration does not challenge cars’ hegemony. When faced with high-profile student tragedies, UChicago opted to flood Hyde Park with university-funded Lyfts to help students avoid late-night risk. Although many students welcomed the Lyft program (midnight Taco Bell without GrubHub surcharges? Yes, please), the message underlying the new service is worth noting: cars are a respite from crime-riddled streets and not a source of danger themselves. The new Campus Safety website echoes this sentiment. With entire pages focused on violent threats, “protect[ing] your property,” and home intruders, the Driving page is a glorified set of directions for how to reach the Hyde Park campus by car. The page labelled “Travel Safely” does not mention cars at all but does advise students to “keep your belongings close to you and never leave your property unattended” and to “never allow a stranger to use your cell phone.” And, of course, to call UCPD to settle any and all problems.

This is not to say non-automotive violence doesn’t exist in Hyde Park. The tragic deaths of Max Lewis, Yiran Fan, and this week’s spate of shootings should concern and sadden students. But UChicago’s administration assumes campus safety is a battle between our beautiful, ivy-bedecked bubble and a malevolent South Side Other — a willful oversimplification. Between the continued reliance on UCPD, notorious for excessive force and over-policing black and brown neighborhoods in Chicago’s South Side, and the implication that threats in Hyde Park can only take one form, the University prioritizes a racist carceral agenda over a complete picture of student safety. A university powerful enough to fund an unknowably large private police force or destabilize a Latin American country has the political authority to widen a bike lane or install a few signalized crosswalks. UChicago simply doesn’t know how to address safety outside of the framework they designed — blue shirts or bust. Until they learn, students will continue to pay for the University’s inaction with bruised legs, busted bikes, and hopefully not their lives.

Julia Spande is a fourth-year in the College.