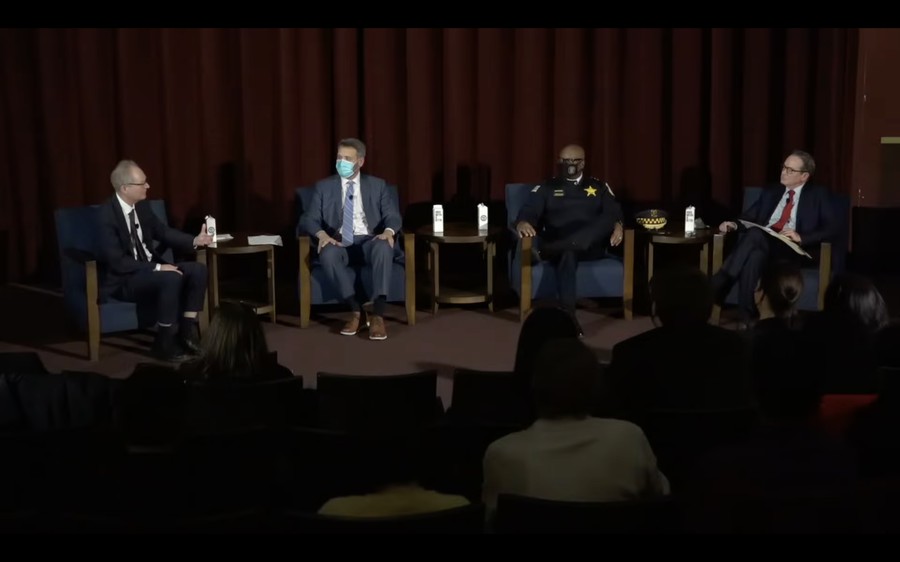 In a campus-wide safety webinar hosted Wednesday afternoon, the University of Chicago Police Department (UCPD) and Chicago Police Department (CPD) announced that they will collaborate to increase police patrols, install more surveillance technology, and improve intelligence sharing in response to a series of violent incidents in Hyde Park last week.

The webinar was a discussion between University President Paul Alivisatos, Associate Vice President for Safety and Security Eric Heath, and CPD Superintendent David Brown. The discussion was moderated by Vice President of Communications Paul Rand.

Alivisatos opened the discussion by acknowledging that the University community is still grieving the murder of University alum Shaoxiong “Dennis” Zheng. He emphasized that although Wednesday's discussion focused on policing, new police strategies are just one aspect of the University's approach to curtailing violent crime in and around campus.

“In [the] coming days and weeks, we will also explore with you the other critical aspects to our approach,” Alivisatos said. “We recognize that we need to partner with our community in a consistent effort to reduce violence, improve health and education, and create economic opportunity.”

In opening remarks, Brown said that technology—such as surveillance cameras and license plate readers—is a significant part of how CPD brought “some sense of justice” to Zheng’s family. Brown noted that a suspect in Zheng’s murder was easily identifiable because of a nearby CPD Police Observation Device (POD) camera. Last week, 18-year-old Alton Spann was charged with first-degree murder, armed robbery, and two counts of unlawful use of a weapon.

CPD will immediately begin installing additional POD cameras around Hyde Park, which will be active in the neighborhood temporarily. Brown acknowledged that some Hyde Park residents have expressed privacy concerns in the past but claimed that community resistance to surveillance cameras has decreased recently.

At night, CPD will increase “blue light missions” around campus, where police turn their cars’ blue lights on to make their presence known. Both UCPD and CPD will increase daytime patrols, while the city police will increase enforcement of traffic violations—such as speeding or failing to stop at red lights—in the Hyde Park area. Brown claimed that increased traffic enforcement by CPD would help prevent other crimes.

“[The suspect in Zheng’s murder] was in a stolen car,” Brown said. “If we had traffic safety missions in and around the campus, could we have stopped him and arrested him for being in a stolen car before he committed a robbery?” Brown believed that more traffic safety missions would deter or capture offenders in advance since offenders are “always doing something to break the law.”

In response to a question about student fears of racial profiling by police, Brown said the CPD would hold officers accountable and not tolerate racial bias.

“We hold them to a higher standard and we will separate them from employment if there’s any bias in their police enforcement activity,” he said.

Brown later added, “I came here 18 months ago to ensure that we continue to build trust in the community, and that means holding officers accountable. And I’m, I’m dedicated to that. I’m here for that very purpose.”

In 2014, a CPD officer shot and killed 17-year-old Laquan McDonald as he attempted to walk away from the officer. A U.S. Department of Justice report drafted after McDonald’s murder found that CPD officers frequently used excessive force against Black and Latino residents and rarely faced consequences.

The University will continue evaluating changes to Lyft services past Thanksgiving break, but both Heath and Alivisatos mentioned that daytime Lyft services raise concerns about increased traffic around campus. Students have taken more than 23,000 free Lyft rides this quarter. Heath said the University will explore other long-term changes to on and off-campus transportations, such as the University-run UGo bus service, but did not announce specifics.

When asked how students can stay safe, Brown told students to plan their route, travel in groups, share travel plans with friends, and cooperate if being robbed or accosted. Students are encouraged to download the UChicago Safe app and visit https://uchicago.edu/safety for safety tips and information.