The Lululemonification of Hyde Park

The opening of a Lululemon is just the next item on the University’s long résumé of gentrification. 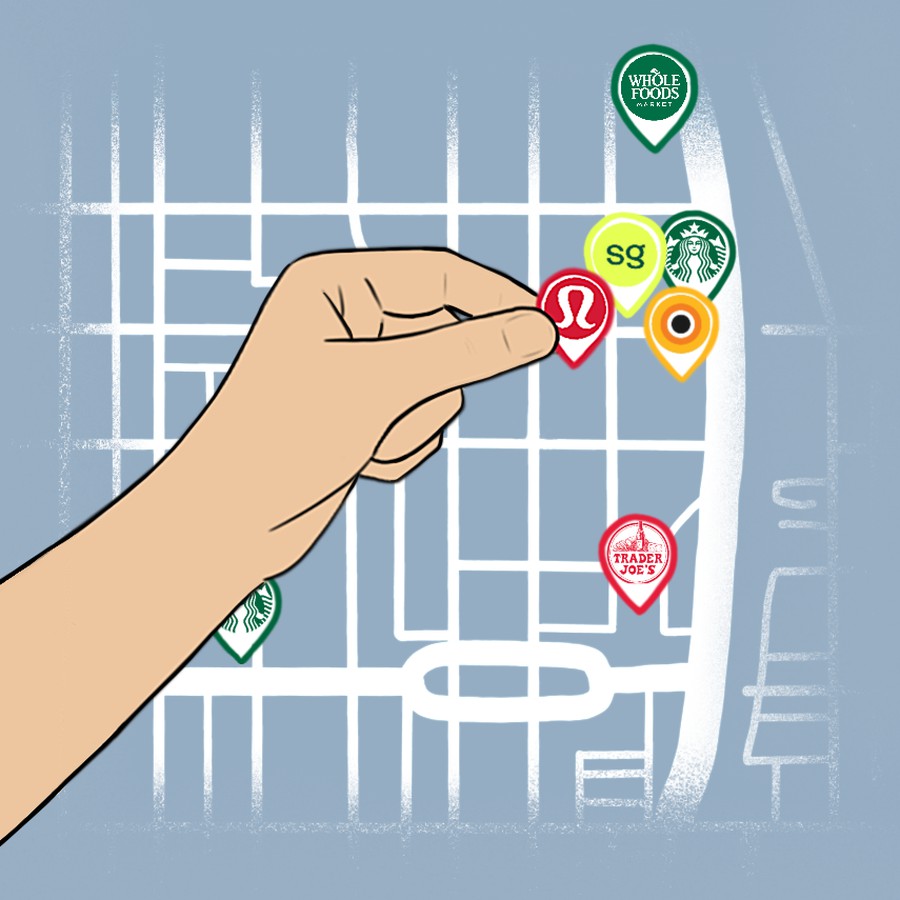 It’s a topic we avoid in our protected Hyde Park bubble but inevitably find intruding our thoughts. It may first enter your mind as you search for apartment leases next year and view rent prices. Perhaps the luxury high-rise apartment buildings sprouting up near the lake invoke its name. You may even notice it next time you walk down East 53rd Street and see a new high-end lifestyle retailer emerging each time: CorePower Yoga, Sweetgreen, and now Lululemon.

You are noticing what is referred to as “gentrification,” and although The Maroon has done an excellent job covering the issue, we often talk about what happened in the past and what needs to happen in the future while ignoring the reality that gentrification is occurring right now. That is to say, we focus so much on the past and future of gentrification as something removed from us. Many students love to voice their opposition to the University’s unquestionable role in gentrification, but they are silent as they sign expensive leases or spend money at chain stores rather than local businesses. Lululemon, a high-end athleisure brand, opened a “pop-up” location on 53rd Street on November 12. The opening of this store is indicative of the ongoing process of gentrification, and it adds to the University’s push to exclude and expel South Side residents in favor of converting Hyde Park into a “college town.”

For those unfamiliar, Lululemon sells high-end athletic apparel, referred to as athleisure, and produces yoga, workout, and training videos. It markets the premise that purchasing these products will gain you entrance into a “global community” of other Lululemon consumers. This idea is what differentiates Lululemon from other athletic apparel brands such as Nike or Under Armour, makes Lululemon popular among millennials, and justifies its higher prices. And the prices are high––for example, men’s joggers and women’s leggings both sell for more than $100.

To begin understanding why the addition of a Lululemon is yet another example in a larger project of gentrification, for which our University is at fault, we must first consider that the University’s push for development in Hyde Park began as a response to an increasing Black population on the South Side of Chicago.

In her 2017 A.B. thesis, University of Chicago graduate Juliet Eldred wrote extensively about UChicago’s nearly century-long history of gentrifying Hyde Park and many other South Side neighborhoods through its control of real estate and “urban renewal” projects. Since the late 1940s, the University has made moves to combat what it called “forces of deterioration” from the influx of Black residents to the surrounding neighborhoods following the Great Migration. For example, the University purchased a plot of land between East 60th and East 61st Streets to “serve as a buffer between the University and the deteriorating neighborhood to the south”—referring to Woodlawn, then predominantly Black—and displaced thousands of families from their homes between 1953 and 1962.

What is clear from Eldred’s research is that the University has deliberately developed Hyde Park to serve its own interests, which are historically rooted in the notion that residents of color should be restricted from entering the neighborhood.

In the present day, the University continues to be intentional about its self-interested development goals through its sick obsession with mimicking the Ivy League schools and making Hyde Park a “college town.” UChicago has explicitly declared that it desires to convert 53rd Street into a retail district within a neighborhood that has otherwise seen no such growth. In fact, the administration stated in 2012 that it needed to convince retailers “to think a little differently about Hyde Park” since many of them seemed to believe that “there must be something wrong with the area.” The University also admitted that it has “always been very competitive when it comes to providing a great intellectual community” and found that students in other cities like New York or Boston have a higher “quality of life” than UChicago students. This is a nice way of the administration saying that it wants complete control over Hyde Park so that it can attract more applicants by advertising a more attractive neighborhood to compete with peer institutions. Moves to attract upscale retailers are in line with the University’s interventions in housing markets, construction of fancy mega-dorms, and development of new retail buildings such as Harper Court.

It is painfully clear that the opening of a Lululemon store is just another step toward constructing a more gentrified neighborhood. The store is a “pop-up” location, which means that Lululemon is using it to test whether or not Hyde Park will be a profitable market. It is telling that comparable high-end apparel retailers on the South Side are rare, and if they exist, they operate in Hyde Park (such as Akira or Villa, both located on 53rd).

While those who patronize stores are most certainly not only UChicago students, retailers like Lululemon understand that the primary demand for their expensive products on the South Side would be in Hyde Park, a neighborhood filled with wealthy students, faculty, and their families.

What makes the situation truly despicable is that these stores exist adjacent to South Side and West Side neighborhoods, where some residents must travel almost five miles to purchase necessities such as groceries; in neighborhoods on the North Side that are similarly affluent to Hyde Park, the average travel distance for the same purchases is less than two miles. The disparity in the number of shopping options available is a huge indicator of how gentrified our neighborhood truly is. The lack of affordable products in existing stores, such as Whole Foods Market or Trader Joe’s, limits options and access for low-income residents.

So what does a Lululemon add to Hyde Park and its surrounding communities? Could it provide more affordable options to local low-income residents? Will it reduce the distance that these residents must travel to purchase basic necessities—that is, if a $138 yoga mat counts as a basic necessity? Can it reduce high rent prices, bring down property values, or benefit local businesses? Of course it cannot. Many of the residents in surrounding neighborhoods will see little benefit from a Lululemon. This expensive athleisure store will not provide affordable access to what residents want and need.

Ultimately, the University has built a neighborhood that serves its own interests and the interests of its students at the expense of the surrounding community. The University’s redevelopment of Hyde Park strongly reinforces boundaries between campus and the rest of the South Side by making them physical. Such actions are detrimental to the surrounding community, and they only serve individuals, namely students, who will reside in Hyde Park for a few years. As Northwestern University professor Lauren Michele Jackson, then a Ph.D. candidate of English at UChicago, explained in The Atlantic, the “rhetoric of the scary urban jungle forgets who the real guests are.” We are merely guests in this space, so what happens when “projects involve massive chains and the recognizable symbols of suburbia?”

The message is that the University and its students prioritize our own preferences while ignoring the detrimental effects as we intrude on the surrounding communities. Lululemon is just the next addition to a list of retailers that make Hyde Park more reminiscent of a suburban strip mall than a Chicago neighborhood and signal to the rest of the South Side how little we care about its well-being.

Coming out so strongly against the opening of a Lululemon store may seem absurd, but I promise you it is not. The alternative is that we all passively watch our University displace residents to welcome high-end retailers into a neighborhood that does not even belong to us. We can grab lunch at Sweetgreen, shop at Whole Foods, or buy coffee at one of the many Hyde Park Starbucks locations while residents lose their homes and find their options for necessities and amenities increasingly limited. This alternative is undoubtedly more ridiculous. We should be more comfortable pointing out active cases of gentrification and showing our support for organizations such as the Obama Community Benefits Agreement Coalition, which works to counteract forces of gentrification. It is our job to voice our opposition to the University’s role in gentrifying the South Side because, ultimately, we are the reason that it perceives a demand for more high-end retailers among its students.