UChicago Alum Suing U. of Tennessee for Deeming Her Social Media Posts “Unprofessional” 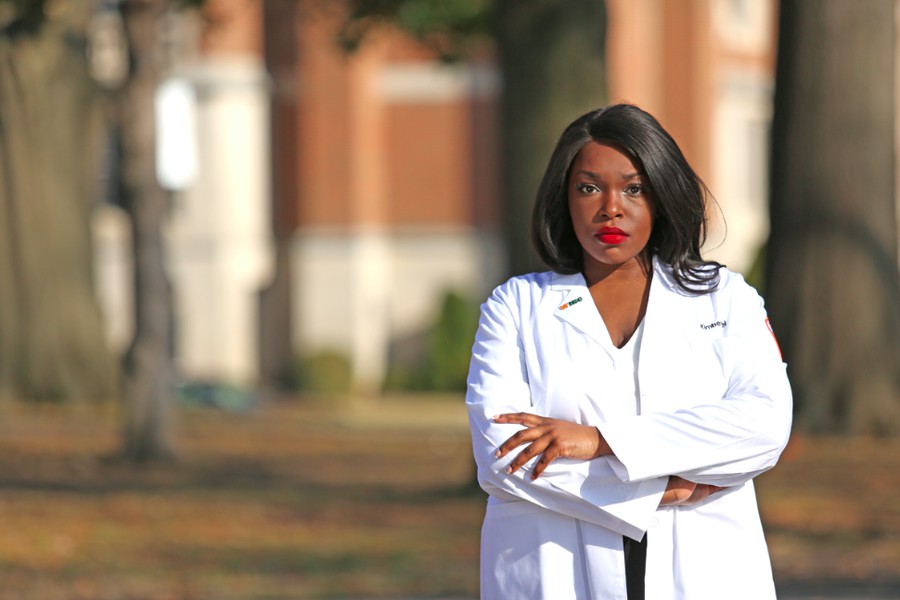 Kimberly Diei, a second-year pharmacy student at the University of Tennessee, is suing the school for deeming her social media posts "unprofessional."

Courtesy of VIA Productions and Breezy Lucia/FIRE

Kimberly Diei (A.B. ’15), a second-year pharmacy student at the University of Tennessee Health Science Center (UTHSC) College of Pharmacy, is suing UTHSC after the school tried to expel her for social media posts that violated their professionalism standards.

The College of Pharmacy’s Professional Conduct Committee investigated Diei twice after receiving anonymous complaints about her posts on social media: once in September 2019 and again in September 2020. After the second investigation, the committee voted unanimously to expel Diei on the grounds that her posts on public Instagram and Twitter accounts were “sexual,” “crude,” and “vulgar.” One of the posts in question included an image of Diei wearing a shirt that exposed her cleavage, and another post included explicit rap lyrics which Diei wrote based on the song “WAP” by Cardi B and Megan Thee Stallion.

“I was disgusted, hurt, frustrated, angry,” Diei told The Maroon. “I was just cycling through all of those feelings in disbelief.”

The professionalism standards for UTHSC, which were posted online after Diei filed her lawsuit, give the school permission to suspend or dismiss students for “unprofessional and unethical conduct which would bring disrepute and disgrace upon both student and profession.” While Diei successfully appealed her expulsion, her lawsuit argues that these standards are unconstitutional and overly broad, as they violate students’ right to free expression “for no legitimate pedagogical reason.”

Diei is represented by the Foundation for Individual Rights in Education (FIRE), a nonprofit that promotes free speech on campuses and encourages higher education institutions to adopt the Chicago principles. Diei said that her case is first and foremost a free speech issue.

“We’re here to learn, but we do still have lives outside of the classroom. I’m hoping those boundaries can be set about how far the rulings of the university can extend into a professional student’s personal life,” she said. “We should be able to partake in conversations that others might deem uncomfortable, but that doesn’t make me any less qualified to obtain my degree in pharmacy.”

However, she also said that it’s no coincidence that the “professionalism” standards were used to target her, a Black woman, noting the bias inherent in deeming certain appearances unprofessional.

“Professionalism rules and policies are created in an attempt to discredit Black individuals or make them feel out of place,” she said, citing the example of race-based hair discrimination, which has only recently become illegal in several states. “It’s used to target Black people and to make them feel uncomfortable in that environment. I do think it definitely has an aspect of racism.”

While the identity of the person who reported her social media posts is unknown, Diei believes the reports may have been motivated by academic resentment. Diei is a vocal participant in all of her classes, a trait she said she picked up while an undergraduate at UChicago. At UChicago, students and faculty “encourage critical thinking, they encourage free speech to a certain degree. We’re always given the floor, especially in certain discussion courses, to voice certain opinions and engage with the material,” she said.

But Diei's active participation met a different response when she began graduate school. “I brought that enthusiasm for learning to this college environment [at UTHSC], and it was not well received. Bullying and harassment ensued,” she said. Her new classmates made Facebook posts about her, talked about her behind her back, and approached her about being less vocal in the classroom.

She was also selected for a coveted internship last summer, which was awarded to only one student in her class. This and other academic successes led Diei to believe that her classmates reported her social media posts as retaliation for her strong academic performance.

“None of this was an issue until I made myself stand out in the class as an individual who is intelligent, well-spoken, and can handle this sort of curriculum,” she said. “Now, all of a sudden, people are prying into my social media and making these reports. Had I remained quiet and kept my head down, I doubt that such reports would have been made.”

“There are several other students who are very vocal in class, and they all happen to be either white males, white females, or Black females of very light skin tones,” Diei said. But their behavior did not provoke the same ire from her classmates: “They only targeted me.”