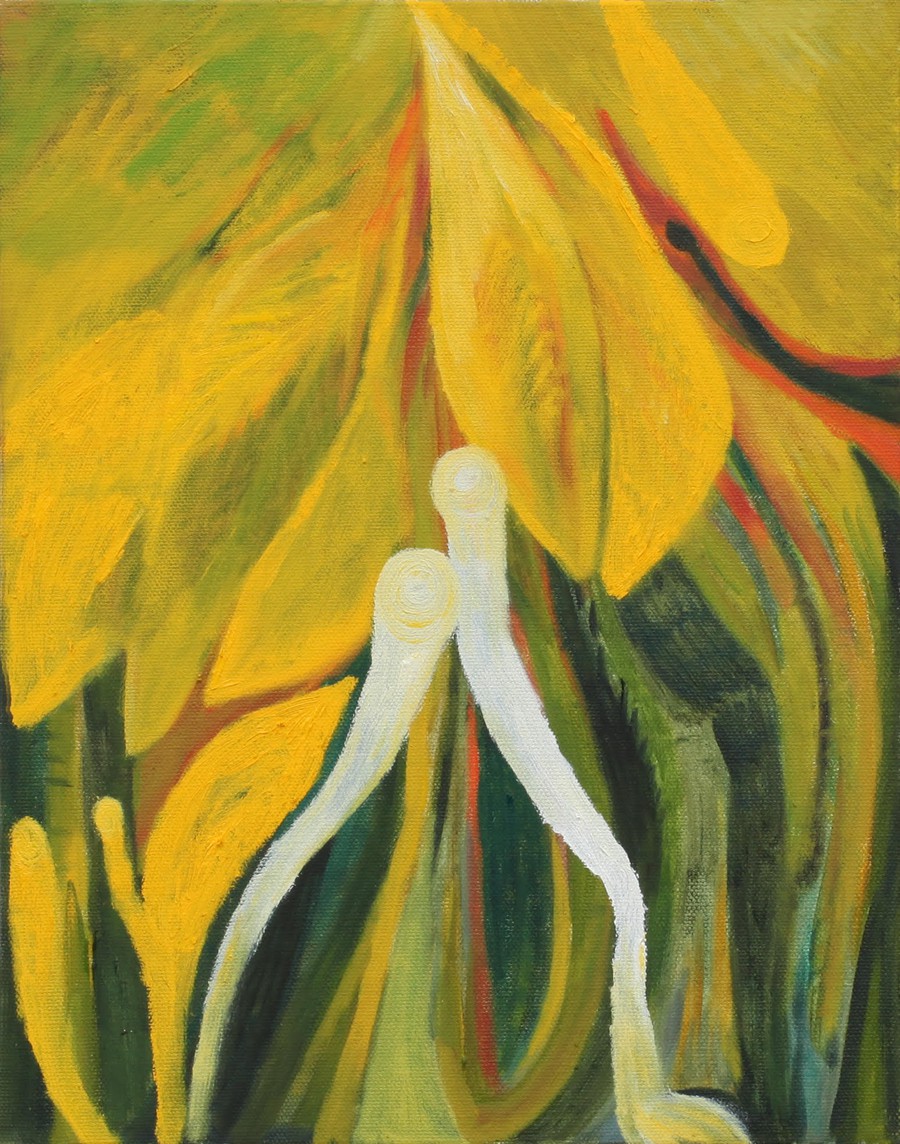 What are we meant to expect when looking at art? Chicago-based abstract painter Soumya Netrabile’s answer: nothing at all. A dozen of her rich botanical abstractions will be displayed at her first solo show at Part 2 Gallery in Oakland, California, this March. Though bright reds and greens dominate in her recent works, each piece retains a unique sense of lucidity and motion through varying proportions of light and dark, the thickness of paint, and the continuity of brushstrokes. “I rarely start any painting with any sort of preconceived notion,” Netrabile said in an interview with The Maroon. “Early on, all my paintings were so stuck on some preconceived notion of what I thought the finished painting should look like. It was so dead when it was done—that’s when I learned to let go of any desires, and I started to see I was making paintings that were more interesting.” 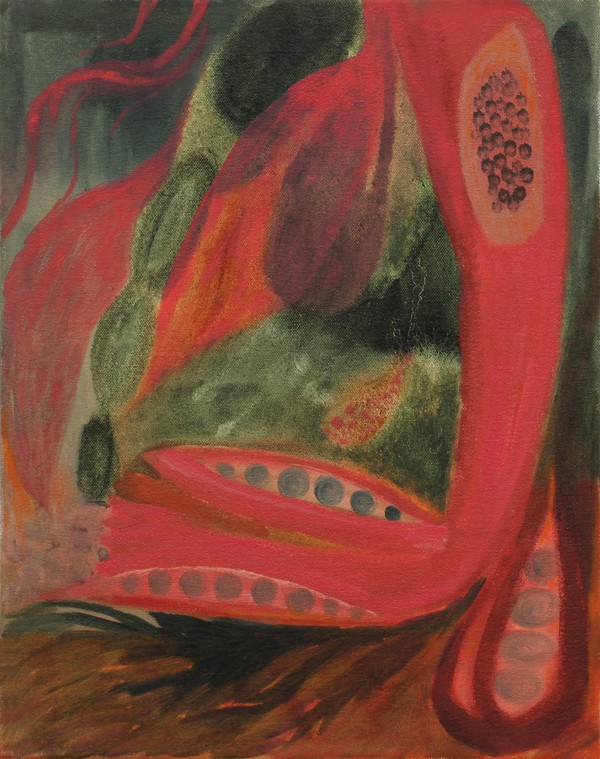 Netrabile was trained as an electrical engineer, an occupation in which planning ahead is crucial. But three years after graduating from Rutgers University, she returned to school at the School of the Art Institute of Chicago. “I worked harder at art school,” she said, “and I remember that feeling: ‘why is this so much harder than engineering school?’ You don’t even know if what you’re doing is good.” Adding to this difficulty, she said that “painting was pooh-poohed…Everyone was doing installation art. Everyone was doing conceptual art. Everybody was talking about how painting was dying. I was very much attracted to that traditional idea of a painter…I went out of my way and took as many painting classes as I could. A lot of figure painting and figure drawing classes. I was really crappy at it,” she laughed.

Now, Netrabile’s abstract canvases betray none of that shoddiness. Each is saturated with evocative colors and the lush organic forms of plants you almost recognize. In one painting, what might be two glowing flower pistils are in the process of intertwining; in another, Netrabile suggests fiddlehead ferns with a turpentine-diluted green. “The abstraction for me comes really easily. And the figuration is very challenging, though I’m beginning to understand how to better explore what I see,” she says. “It’s all memories…[the botanical abstractions derive] from memories and emotions based on my experience of the natural world.”

The natural world has long been central to Netrabile. In the past year, she has again expanded her artistic toolkit to figure painting, a first since art school, but even in these recent studies, which can be viewed on her Instagram, her botanic brushstrokes still usher the eye across the canvas. She has been a hiker since age twelve, which has proved an inspiration. “I take sketchbooks with me every time I hike. I have a lot of little notations about things that triggered something in me while I was hiking—a beautiful plant or maybe a rock…This morning I went when snow was falling…Everything was so muted. It was all white and this amazing blend of browns,” she said. Nor does the cold Chicago landscape wilt the vibrancy of Netrabile’s work. “The way I start a painting is I’ll literally look at all the paints I’ve got, and go, ‘This yellow looks interesting, let me start with that!’ And I’ll put that yellow down and maybe I’ll go find something darker and start doing something with that, and I’ll slowly build a palette for a while. I spend half the life, half the creation of a painting picking colors on a whim,” she said. “I do a lot of scraping down and rebuilding.” 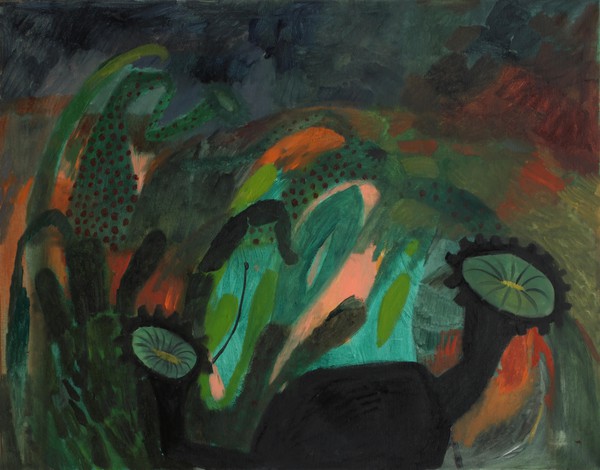 Netrabile likens her painting process to her method in raising children: “One of my best friends told me that ‘the children that I love the most are the ones who are allowed to author and live out their own stories instead of living the stories their parents create for them.’ Painting is kind of the same way. When I had children, I said, ‘Okay. This is about me learning from her, not about me imposing who I want her to be.’ I have raised my children with that idea in mind, that they’re always teaching me something—about themselves, about life.”

When I asked if her work addresses the abundance of contemporary political issues, as do the works of many other artists today, Netrabile’s answer was consistent with her faith in intuition and zen. “I like things a little messy,” she said. “I tend to step back from making things that are overt political statements or overt statements in general. I like vagueness—I like things to float between different meanings and not be easily definable.” She pointed to her work “The Waning of the Powerful,” which reacts to the “collective agony” she sees. This piece features a rich floral mass of reds, pinks, and oranges, all seemingly from the same stem, drooping. The flat, vertical brushstrokes of the ground below suggest that the grass is melting off the canvas with the plant, or perhaps it’s the foundation that originally gave way, prompting the plant’s decline. A sole flower faces upward at the top—a lipstick-red cone shape opening to reveal striations that suggest teeth. 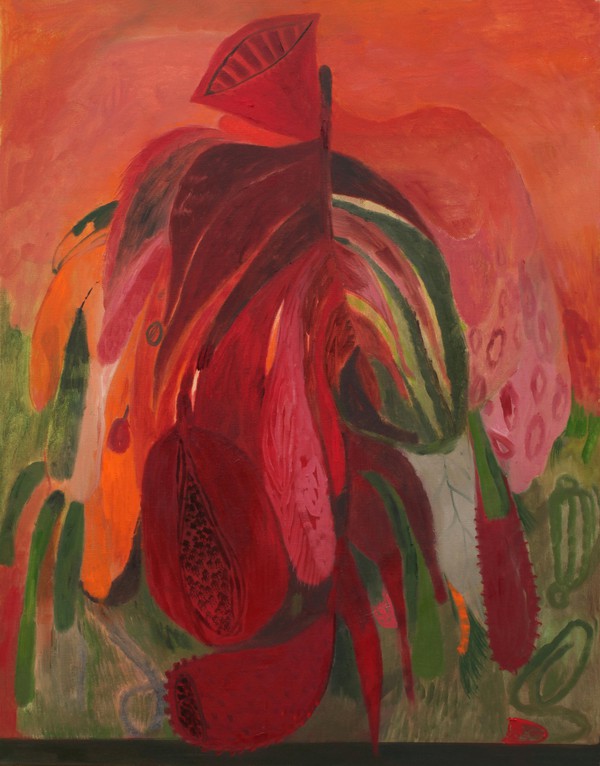 Netrabile and her work don’t just refute our expectations, whether they be of what a plant should look like or of a facile political meaning. Rather, she asks us to eradicate our expectations altogether. She invites us to rid ourselves of preconceived notions and asks only that we communicate with her work and absorb its rich suggestions and ambiguities until we’re ready to move on to the next.