The Fleeting "Eternals" Flies Too Close to the Sun 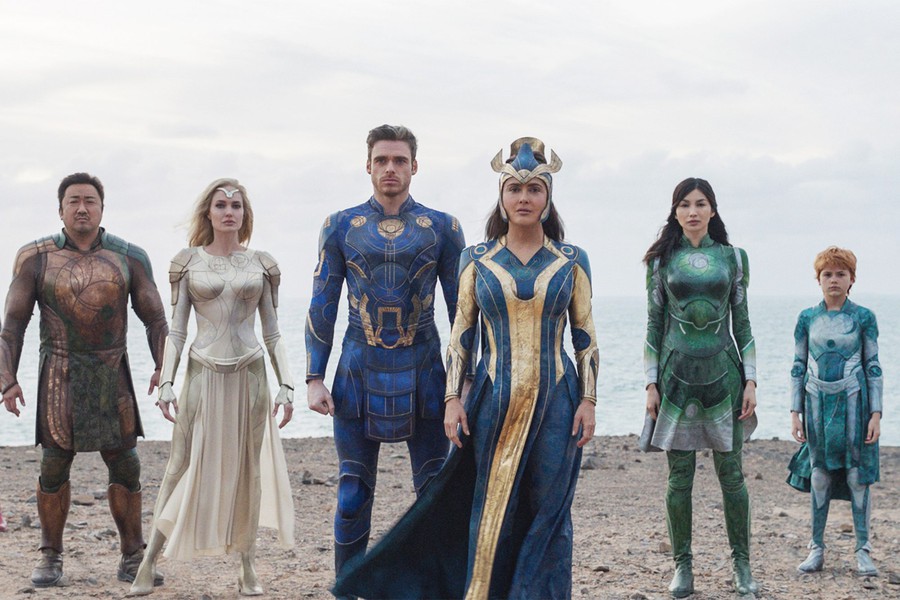 The MCU’s latest film follows the titular Eternals, ten immortal aliens who each have their own special abilities

The following review contains spoilers for the movie "Eternals."

Eternals urges its audience to reflect, take a step back from the growing convolution that is the Marvel Cinematic Universe (MCU), and, despite devastation and loss, appreciate life on Earth as miraculous. In its essence, the film’s premise challenges Loki’s nihilism, and defies an acceptance of our destined demise—in short, humanity is worth saving even if it means betraying fate itself.

Director Chloé Zhao (Nomadland) was the obvious choice for a deep study of the human character. Her distinctive, contemplative style, which marries her characters to a natural aesthetic, shines with cinematographer Ben Davis (Doctor Strange, Guardians of the Galaxy) at the helm. Zhao’s vision walks us through a glorious Babylon, saturated with the deep cerulean hues of the Ishtar Gate, and a brittle present-day Australian desert, beaten down by dry wind and decorated with the disturbing art of mentally volatile Eternal Thena (Angelina Jolie). Amid the MCU’s recently relentless slew of fast-paced fight sequences and their accompanying bass-boosted music (The Falcon and the Winter Soldier, Shang-Chi and the Legend of the Ten Rings, Black Widow), Eternals promised a different approach to the superhero genre, one more intimate in its delivery.

The MCU’s latest film follows the titular Eternals, ten immortal aliens who each have their own special abilities, most of which are visually enhanced by Marvel Studios’ now-signature golden energy blasts (see: Captain Marvel, Iron Man, Shang-Chi, Vision). They arrive on Earth in 5000 B.C.E. to eradicate bloodthirsty, life-sucking monsters called Deviants, and they succeed by the 16th century C.E. In the process, though, they grow attached to humans, teaching them to build shelters, bake the first loaves of bread, and create groundbreaking inventions like the plow and the atomic bomb. (Yes. You read that right. In a flashback, genius inventor Phastos (Brian Tyree Henry) even sobs uncontrollably about how horrible and betrayed he feels because he has developed weapons of mass destruction. Who knew they could be so deadly?) The Eternals split up over differences in opinion about how they have ignored human atrocities (wars, Spanish colonization, and the like), but they reunite in the present day after cataclysmic events (global warming) bring back the extinct Deviants. Our protagonist Sersi (Gemma Chan), who possesses transmutational powers, learns of the Eternals’ true purpose on Earth from a telepathic connection with the Prime Celestial Arishem (David Kaye), and from there, the plot unfolds.

As countless reviews have alluded to, the cast displays a natural inclusivity and a refreshingly acute awareness of imperfection. Eternals leader Ajak (Salma Hayek) is a healer confronted with the grim truth that she can’t save everyone. Speedster Makkari (Lauren Ridloff) uses her hearing impairment to detect the slightest frequencies but stumbles as she abruptly stops her sprinting. Richard Madden’s Ikaris, the strongest Eternal in the film, shoots cosmic energy beams but with imprecise aim. And from kindhearted Gilgamesh (Don Lee) to androgynous, fickle illusionist Sprite (Lia McHugh), each character is given individual dreams beyond their main objective of battling a CGI army of sinewy beasts. Marvel Studios has become quite masterful at delightfully introducing the ordinary side of extraordinary beings, and I applaud Eternals for being no exception.

Ironically, this character-driven focus is also where Eternals stumbles: Its cast is simply too large to flesh out fully the potential of each Eternal beyond mere introduction, leaving the movie to glaze over rushed attempts at developing their friendships, romances, and emotional stakes. We are told over and over that the Eternals view each other as family. Indeed, it is heartwarming to see that Gilgamesh spends centuries caring for his mentally vulnerable friend Thena, the goddess of war whose mind has fragmented from the weight of her painful memories. Mind controller Druig (Barry Keoghan) croons over his love interest, nicknaming her “Beautiful Makkari.” Yet I seldom see this intimacy elsewhere. Sersi is reduced to a mere vessel through which the audience watches the action unfold, and her chemistry with Ikaris is flat at best. Sprite steals glances at Ikaris’s direction, but her romantic pining is demonstrated by two scenes of lackluster whining. Criminally underused powerhouses Jolie and Hayek could have shown us what previous planetary apocalypses looked like, which would in turn explain Thena’s fractured memories and Ajak’s decision to abandon Arishem’s mission. Instead, the audience is treated to Arishem’s tedious info-dumping session to fill in the gaps of our knowledge regarding the Celestials, Deviants, and Eternals.

This brings me to my other criticism: We are bombarded with so much exposition about the aliens that we miss out on scenes of the Eternals’ affection for humanity—supposedly a driving motive for the Eternals. Certainly, we see bouts of genuine compassion, such as Phastos kissing his human husband (Haaz Sleiman), or Bollywood star Kingo (Kumail Nanjiani) bickering with his manager Karun (Harish Patel) as they attempt to vlog an Eternals documentary on multiple cameras, a running joke in the film. Otherwise, their relationship with humans takes a back seat, mostly featuring nameless figures across the centuries whose paths they temporarily cross. The consequential unsatisfying shallowness left me wondering about the motives particularly of Druig, Thena, Makkari, and Gilgamesh—after isolating themselves from humanity for centuries, what are their stakes? For the majority of the time, Eternals leaves this question unanswered, instead replacing it with the shallow onslaught of mindless monsters, golden superpowers, and quippy humor.

Amidst the cacophony, I appreciate Zhao for slotting in themes of ironic disillusionment toward humanity where the story allowed. Druig, in his desperation to stop the Spanish conquest in Mesoamerica, himself becomes a colonizer of Indigenous minds for half a millennium, even teaching them Spanish of all languages. His jaded condition, too, moves him to see Indigenous people as weaponizable bodies through which he could design society as he desired. Kingo, too, treats humanity as pet-like sources of entertainment, whimsically vlogging through a coming apocalypse and shaping the Bollywood scene to boast of the Eternals’ achievements. (The musical he films during his introduction is supposedly the heroic retelling of Ikaris.) These bits and pieces of their disenchantment were intriguing, even disturbing. Perhaps if this hesitancy toward viewing humans as humans were more prominent, their eventual embrace of Earth would have been more strikingly powerful for both the storyline and their own development as immortal characters.

I suppose I must address the sex scene between two naked characters, hailed as a momentous first for the MCU. Alas, and rather unsurprisingly for the sexually stifled MCU (look no further than Joss Whedon’s questionable Natasha Romanoff and Bruce Banner pairing in Avengers: Age of Ultron), the camera zooms into Madden and Chan’s faces as they assume missionary—indeed, how cinematically revolutionary. The sex lasts maybe eight seconds if I stretch my calculation, only bolstering my disappointment with the MCU’s hesitancy to embrace directorial vision beyond the traditional boundaries of a blockbuster studio. Why bother hiring someone as brilliant as Zhao if the producers seem content with such bland treatment of human intimacy? If Marvel Studios dared to look past CGI spectacles of ropey dinosaurs and droid-like gods and moved to prolong moments of emotional vulnerability instead, maybe Ikaris’s distraught agony as he hesitates against Sersi at the movie’s climax would be more palpable and less eyeroll-worthy. If Marvel Studios shed its fixation on the construction of its already chock-full superhero universe, this entry in the new phase would cease falling short on fully realizing its optimistic message of human mortality, sacrifice, and resilience.