Got Plot? What Musical "Paradise Square" Fails to Deliver in Plot It Delivers in Spectacle 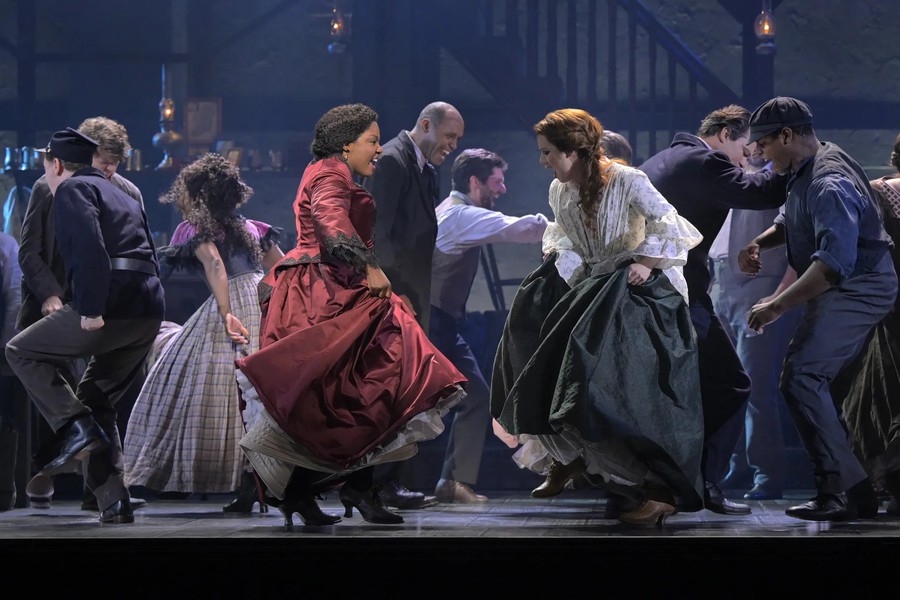 The performances of Joaquina Kalukango (left) as Nelly and Chilina Kennedy (right) as Annie were the highlights of the show.

Live theater is back, and we’re more excited than ever for this season’s productions! Anticipation from the Chicago theater community has brought great attention to the Nederlander’s pre-Broadway opening of Paradise Square.  Alongside the brilliant Craig Lucas (creator of Light in the Piazza and Prelude to a Kiss), two new playwrights—Christina Anderson and Marcus Gardley—have garnered attention for their creative work on the production. When it was announced that acclaimed playwright Moises Kaufman was named the director, expectations increased even further. Considering these bright minds, one would expect a flawless production, but even with its spectacular performance, Paradise Square presented a lackluster plot with very little character relatability.

The musical tells the story of a neighborhood in the Five Points (now known as lower Manhattan), specifically the neighborhood of Paradise Square. Here we meet the protagonist, Nelly Freeman, a Black woman married to an Irish man, Willie O’Brien, who owns a bar on the corner of the street. At the height of the Civil War, Willie goes to lead an Irish-only regiment. During this time, Nelly is faced with a choice: Does she host a runaway slave named Washington Henry in her bar, or does she house her Irish nephew Owen as he searches for the American Dream? Unable to choose, Nelly makes the two men share a small bedroom in the attic of her bar. The two are made to work at the bar as entertainers but are unable to cooperate. These tensions intensify when Owen learns he may be drafted into the war.

The show begins with what is, in my opinion, a lackluster opener. Rushed exposition and uninspiring musical composition make a bad first impression on the audience. In the second act, the show’s music improves. The plot of the show was unsatisfying as well. There were far too many characters introduced each with neither relatability nor development. Just as the audience gets to peer into the true intentions of the characters, the show suddenly ends. There is little satisfaction that comes from a show where the protagonist has no character development. Furthermore, there were several moments that felt unnecessary to the plotline of the show. Act One felt excessively long and overwhelming; it was clear the same information could have been presented in half the time. Three love songs, two “I want” ballads, and one joyous dance number later, we were still in the same place plot-wise. Overall, there are a significant number of changes the playwright could’ve made to create a more interesting and satisfying plot for the audience.

The show attempts to speak on issues regarding racial tensions, immigration, and inequality but ultimately fails to bring light to any specific message. Throughout the show there seems to be an attempt at bringing together two minorities in Paradise Square, the Irish and Black communities, but the tensions between the two groups are randomly resolved without any clear solution. The message of the piece is unclear in light of this.

The eye-catching spectacle of Paradise Square was the choreography. Choreographed by the phenomenal Bill Jones, the dancing in the show was spectacular. Jones combines two separate dance cultures, the Irish Clog and Step Dancing, in order to juxtapose racial tensions between the Irish and Black people of Paradise Square. When the two groups join a dance-off, they separate into two groups with two different styles of dancing. The eventual joining of the two types of dancing brought forth ideas of hope and inclusion. The true genius of this work really puts the show in for a spot at a nomination or even a win at the Tony’s for Best Choreography.

The performances of Joaquina Kalukango as Nelly and Chilina Kennedy as Annie were the highlights of the show. Though they have two truly distinct singing styles, each actress brings her own to the part. Kalukango brings soul and power and with every note adds a new layer to her character. Kennedy has an incredible controlled vibrato that she manages to bring out despite having to sing with an Irish accent. Their chemistry with one another as sisters-in-law was beautiful, and I found myself entranced by their skill.

Though flawed in plot, I believe that, with tweaks between production here in Chicago and on Broadway, Paradise Square will have a fulfilling run in its New York theater. I see great potential in the work and already view the music and choreography as wonders.

Even with my criticism, you should take the time in the coming weeks to see Paradise Square and to support Chicago theater, as there are many great moments in the performance. The music, dancing and liveliness of the piece will bring you right back home: to the theater!