Court Is Back! Thoughts on Its Opening Show: "The Tragedy of Othello, the Moor of Venice" 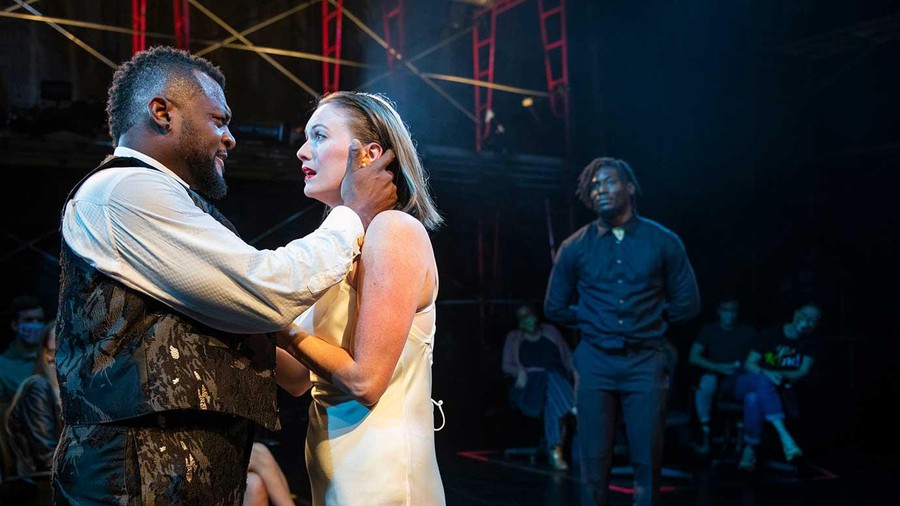 Kelvin Roston Jr. (Othello) and Amanda Drinkall (Desdemona) perform in Court Theatre's recent production of "The Tragedy of Othello, the Moor of Venice."

Court Theatre returned in 2021 with its first show of the season: The Tragedy of Othello, the Moor of Venice directed by Charles Newell and Gabrielle Randle-Bent. For those not familiar with the Shakespearean classic, our scene opens in Venice sometime in the early 17th century when the Venetian state is at war with the Ottoman Empire. Othello, a Moorish general in the Venetian army, has recently married Desdemona, the daughter of the Venetian senator Brabantio. The senator is eager to prevent their union, opposed on the grounds that Desdemona is white and Othello is Black. Meanwhile, Othello promotes his right-hand man Cassio to the rank of lieutenant, angering the story’s villain, Iago, who was assumed next in line for the position. Othello’s life and mind steadily unravels as Iago revenges himself upon the Moor through a series of complex schemes that lead to his ultimate undoing. The play wrestles with themes of jealousy, miscegenation, class, and, of course, love.

Court’s performance was astounding. A friend and I saw it on a quiet Wednesday afternoon. Walking into the theater, I realized my last live performance experience was pre-pandemic. No better way to start again than with Shakespeare.

Kelvin Roston Jr.—whose other stage credits include Oedipus Rex, King Hedley II, and Five Guys Named Moe—dazzled as an impassioned, contemplative Othello, while the spectacular Timothy Edward Kane played the duplicitous Iago opposite. Roston’s performance played up the tender side of his character, specifically in the scenes with his wife Desdemona, played by Amanda Drinkall. This characterization provided both sharp and heartbreaking contrast in the scenes where Othello is driven slowly mad with jealousy. Other productions often place more importance on “honest Iago,” the main villain of the plot, leaving the sense that Othello’s descent is inevitable. This version emphasized the racist cruelty inflicted upon the Venetian, a choice that I believe leaves the audience feeling more sympathetic toward the general than alternative readings.

The show contained a multiracial cast of actors, particularly uncommon for Shakespeare and perhaps even more so for Othello with most productions casting a Black actor in the titular role surrounded by an otherwise white cast. The cast as a whole performed wonderfully. Each actor blended both the nuanced facial expression and wild body comedy that make Shakespeare such fun to watch.

Cassio was played by the impeccable Sheldon Brown. As Cassio is traditionally portrayed by, and perhaps written as, a white person, Brown’s casting in this role added another interesting racial dynamic to the already thorny plot of the play. Iago means to turn Othello against Desdemona by suggesting she is cheating on him with Cassio. Casting both Othello and Cassio as Black actors added another racialized dimension to the general’s marital insecurities.

Playing opposite Brown as Cassio’s love interest Bianca was Darren Patin, a.k.a. Chicago’s own drag queen Ari Gato. Patin performed the role of Bianca in drag, perhaps a nod to Shakespearean era performances in which female roles were traditionally played by young boys in costume. The queering of Bianca’s role provided an interesting counterpoint to the archetypal white femininity that the character of Desdemona represents, in particular as Bianca is in some ways pitted against her for the affections of Cassio.

Desdemona, played by Amanda Drinkall, delivered a fantastic performance. Drinkall is no stranger to the Bard having performed in everything from A Winter’s Tale to Measure for Measure. There were however moments when Drinkall’s on-stage chemistry with other actors, in particular her maidservant Emilia, played by Cruz Gonzalez-Cadel, or her husband Othello felt contrived. I wonder if this is perhaps not a failure of Drinkall as an actress but instead a construction of the character of Desdemona. As an upper-class white woman and the daughter of the senator Brabantio, played in this production by Sean Fortunato, Desdemona is perhaps in a certain position of power in relation to the other characters in the play. Taking all this into account, I am not sure the director’s approach to her character was as nuanced as I might have hoped.

The production was set up theater-in-the-round style, where rather than an official stage, the actors are placed in the middle of the audience with seating on all sides. Encircling the space above was a large scaffold-turned-balcony that actors would frequent to murder or soliloquize. This space was used to interesting effect during a scene in which Iago and Roderigo, played by Erik Hellman, begin to plot Othello’s downfall. While the main action took place on the floor, the rest of the cast was having a slow-motion dance party on the balcony above. The floor seating was made up of swivel chairs that allowed the audience to pivot from Iago and Roderigo’s machinations to the action above. All the while, eerie half speed EDM created a scene at once tense and comical. “As an audience member, I felt deeply engaged by the ways Othello dissolved the fourth wall,” says Nia Morrison (A.B. ’21). The overall staging no doubt contributed to this feeling of immersion, a credit to designer John Culbert who helmed the show’s scenic design.

Not only the music and staging but the costuming as well were modern upgrades on the early-modern English garb of more traditional Shakespeare performances. Nearly all the actors were dressed in grayscale, black and white, likely a not-so-subtle nod to the racial conflict at the center of the play. However, the costumes were far from boring, featuring a wide range of textures and fabrics that stood in as visual analogs for each of the characters, with even a few easter eggs along the way (the lining of Othello’s blazer was the same fabric as Desdemona’s handkerchief).

There were also a few notable additions to the play. Following a storm that destroys an enemy Turkish fleet, Othello calls for a party to celebrate. In this production, the directors added a poem in near-modern English that among other things asks the audience and the assembled characters to not judge a person by the color of their skin. While certainly a worthy sentiment, I question its inclusion in the play. In my opinion it felt a little too on the nose for a play ostensibly already about racism and its interplay with sex and power.

Additions and omissions aside, I loved the performance from beginning to end. Court Theatre’s production of The Tragedy of Othello, the Moor of Venice has since finished its run, but I plan on returning soon for their upcoming production of The Lady from the Sea opening February 25, 2022.