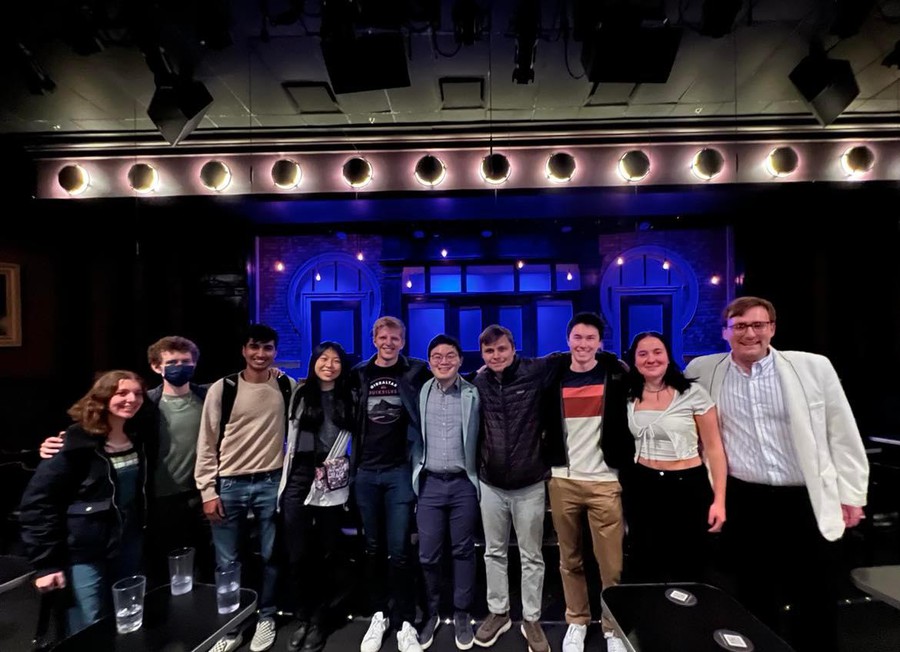 Members of Undergraduate Student Government at A Night at the Second City with USG.

This spring’s Undergraduate Student Government (USG) elections will take place from Wednesday, April 20, through Friday, April 22. The list of nominees was finalized on April 13. Undergraduate students will receive an email with a voting link when balloting begins.

After Student Government split into USG and Graduate Council last year, the traditional structure of the cabinet was overhauled. This year’s election marks the first time that the executive slate will be composed of two people, a president and an executive vice president, rather than three. The chair of College Council (CC), a position occupied most recently by Marla Anderson, will be chosen separately.

The Maroon interviewed candidates running for cabinet-level positions about their platforms, their past experiences in USG, and what they hope to accomplish if elected.

The Good Vibeslations slate is running uncontested in this year’s election. Third-year Summer Long, who is the current vice president of student organizations and has been a CC representative since her first year, will run for president of USG, succeeding Allen Abbott. Jefferson Lind, who served as a CC representative during the 2021–22 school year, will run for executive vice president, replacing the position of executive vice president for external affairs most recently held by Natalie Wang. 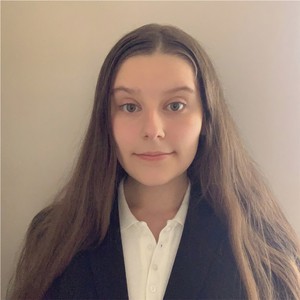 Good Vibeslations hopes to prioritize the mental health of USG and CC leaders. Lind said he hopes to improve the internal culture of CC and USG by distributing the workload.

“Overall, we want [USG culture] to go back to being more of a fun thing. We want it to be something that people feel comfortable doing,” Lind said.

Long added that another important focus of the slate is supporting RSOs and student organizations at large by expanding the Student Engagement Fund, which supports student programs and initiatives that are not part of activities undertaken by a RSO. 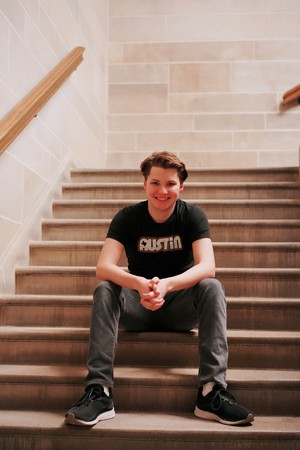 “We believe through advertising this more, we can get more funding in the hands of students who have ideas that might not be recognized by the University formally but still will be able to pursue whatever activities that [they] want to without having to have the support of a full RSO behind them,” Long said.

In her capacity as vice president of student organizations, Long oversees the Committee on Recognized Student Organizations (CORSO), among other committees dedicated to funding RSOs. As vice president of CC, Lind has also accumulated experience working with student groups that have not been officially recognized or funded by the University.

“I served as the treasurer of Quest+ this year, and I'm a QuestBridge Odyssey scholar,” Long said. “We really want to work to uplift the work that this organization on top of [what] the Socioeconomic Diversity Alliance has been doing, especially surrounding their work with financial aid and the bursar.”

In her platform, Ukaonu, who currently serves as a CC representative for the Class of 2025, is prioritizing engagement with South Side businesses, which she hopes to achieve by spearheading community initiatives such as hosting events and guest chefs from South Side restaurants. As a member of the Committee on Marginalized Student Affairs (COMSA), Ukaonu also aims to increase microgrants and begin a textbook initiative that helps students buy textbooks more affordably.

“I think that we could do cheaper textbooks, extra Maroon Dollars for textbooks, or even free textbooks for Odyssey scholars and such,” Ukaonu said. “Or even a textbook pass-down system so that we don't have to buy extra textbooks and people can pass them down [to] cut costs.” 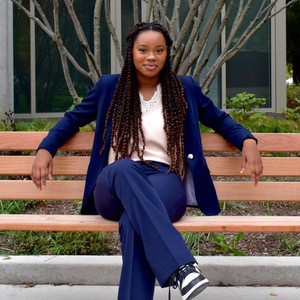 Ariana Ukaonu, who currently serves as a CC representative for the Class of 2025, is running for Vice President of Advocacy.

In order to implement these plans, Ukaonu will form a committee that will meet with Provost Ka Yee C. Lee to discuss ideas and receive approval. “That's usually how we do things,” Ukaonu said. “We have to get the administration’s permission.”

Regarding the University of Chicago Police Department (UCPD), Ukaonu hopes to push for budget transparency and better communication to the rest of the school community about incidents on campus. Ukaonu told The Maroon that she was working on a resolution requiring the University to send a schoolwide email notification when a homophobic, racist, or other type of targeted incident on campus occurs.

“I think the University prioritizes the idea of safety more than safety itself,” Ukaonu said. “And that's just something that we should not be doing.”

Foroohar has served as a CC representative for the Class of 2024 since the 2021–22 academic year. As a current member of the Health and Wellness Committee, Foroohar said she feels well versed on ways to accommodate dietary restrictions as well as improve mental and physical health.

“I think your mental health and especially your physical health can directly tie into how you do academically, in job searches, and in other aspects of your life,” Foroohar said. 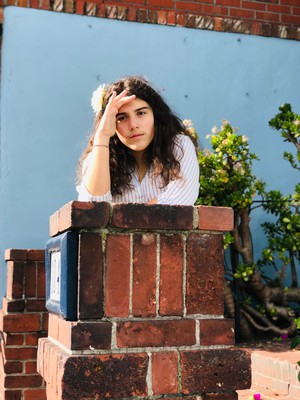 Darya Foroohar has served as a CC representative for the Class of 2024 since the 2021–22 academic year.

If elected, Foroohar plans to increase communication between USG and the rest of the student body in order to make USG more accessible and easily navigable.

“The number one issue I find when I'm talking with people who are in student government is that nobody knows how student government works,” Foroohar said. “Because if we don't have communication, then students can't come to us with their concerns, which makes it difficult for the administration to take us seriously and believe that students have these concerns.”

Brestovitskiy, who has been on USG since her first year at the University, currently serves as the chair of both the Academic and Career Fairs Committee and the Community Service Fund. If elected, she hopes to focus on improving students’ mental health and strengthen academic and career support systems at the University. In particular, Brestovitskiy wants to secure more internship funding for Metcalf Internships. 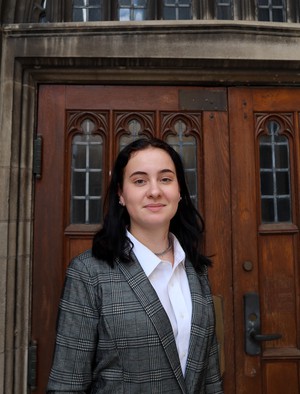 Julia Brestovitskiy, who has been on USG since her first year at the University, currently serves as the Chair of the Academic and Career Fairs Committee and the Chair of the Community Service Fund.

“Right now, $5,000 is not really enough to cover any rent or cost of living across the United States. It's actually below the federal minimum wage, and that is really difficult, especially for our first generation, low-income students,” Brestovitskiy said. “We want to make [top-off grants] open to all internships and also make sure that covers technology, rent, and any sort of other additional unforeseen costs that are not currently covered in Metcalf internships.”

Brestovitskiy also emphasized the importance of implementing ways to mitigate the stress that nine-week quarters place on students. She said she hoped to help students struggling with mental health because of reading period or final exam violations.

“[If] you have, during the quarter, only two or three days to prepare for final exams, only to find out that your professors are sort of already violating those policies and assigning work when it should not be due, [it would be helpful to] communicate to students [how to] to report and protect their rights,” Brestovitskiy said. 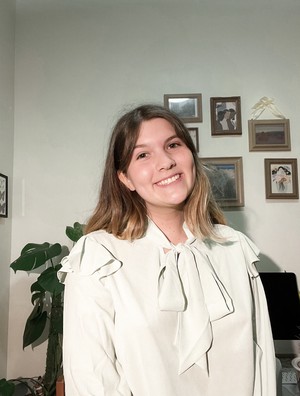 India Hill is currently the chair of the Committee of Campus Sustainability, a position she has held since last spring

Hill is currently the chair of the Committee of Campus Sustainability, a position she has held since last spring. Hill believes her experience as a resident dean assistant (RDA) in Max Palevsky Residential Commons aligns with a role involved with residence life and dining.

Hill said she plans to push for a zero-waste proposal for the University and to improve vegan and vegetarian options on campus, which she says has been a longtime issue.

“I know when I first came to campus, I was vegan. But due to limited options in the dining halls, I went back to being vegetarian just because it didn't feel like [being vegan] was a feasible option,” Hill said. “Luckily, I have the flexibility where I was able to do that, but for a lot of other students for various reasons, they're not able to do that, so they're left with a lot of limited options and having to spend more money on it.” 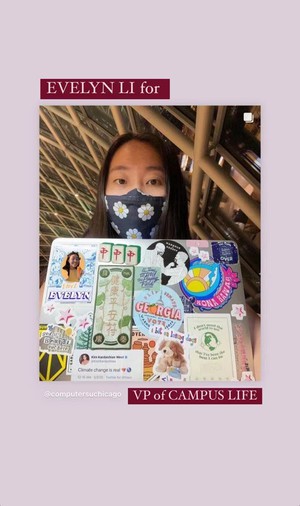 Evelyn Li, who served as a Class of 2024 CC representative for the 2021–22 school year, will run for Vice President of Campus Life.

Li, who served as a CC representative for the 2021–22 school year, said her bicultural upbringing makes her uniquely situated within the student body. She grew up in Atlanta, Georgia, before moving to Beijing, China, where she attended high school. “I’m an international student, but I’m also not an international student,” Li said. “I feel like these are two parts of the student body that there is a bit of a gap between, and I like being in between. I'm hearing what's going on at all times.”

Li’s platform focuses on fixing drainage on the quad, implementing Fourth Meal at dining halls both north and south of the Midway each quarter, and reprising the Associate Membership program, which allows students living off campus to maintain affiliation with the house in which they originally lived.

“I'm moving off campus next year, but I still want to feel connected to my house,” Li said. “My time in residential life was really impacted by COVID, so just getting some years back would be really nice.… I think that the three things that I just listed that I will advocate for specifically are all very much within the realm of possibility.” 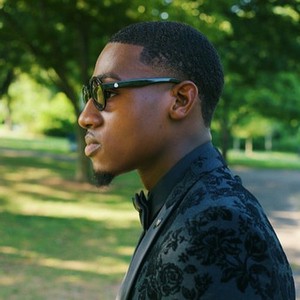 Devin Johnson is currently a representative for the Class of 2025 on College Council.

Currently a representative for the Class of 2025 on College Council, Johnson has shared his platform, which values leadership in community service, on social media. According to his statement on Instagram, Johnson will “lead in unity always for a better and prosperous tomorrow. Progression in succession is the objective I have for the advancement of us all, and the only standard that I will always keep.” Johnson declined The Maroon’s offer for an interview.

Johnson has advocated the implementation of the Lyft Ride Smart program and worked with the Department of Mathematics to implement a new mathematics sequence, beginning fall 2022, to act as a bridge program for students with limited calculus backgrounds. If elected vice president of campus life, he plans to create “clear and open communication channels between school administration and the student body.” He also hopes to increase the number of locations where Maroon Dollars can be used and expand the U-Pass system to the Metra.

“After canvassing this past week I learned of the best possible ways I can add value to your lives,” Johnson stated in an Instagram post. “I realized that my platform must grow to satisfy the needs of the people I wish to help. Thank you all for the feedback and enjoyable discourse. I can promise progress toward all of these [initiatives]. In the end, my [success begins] and ends with you.”