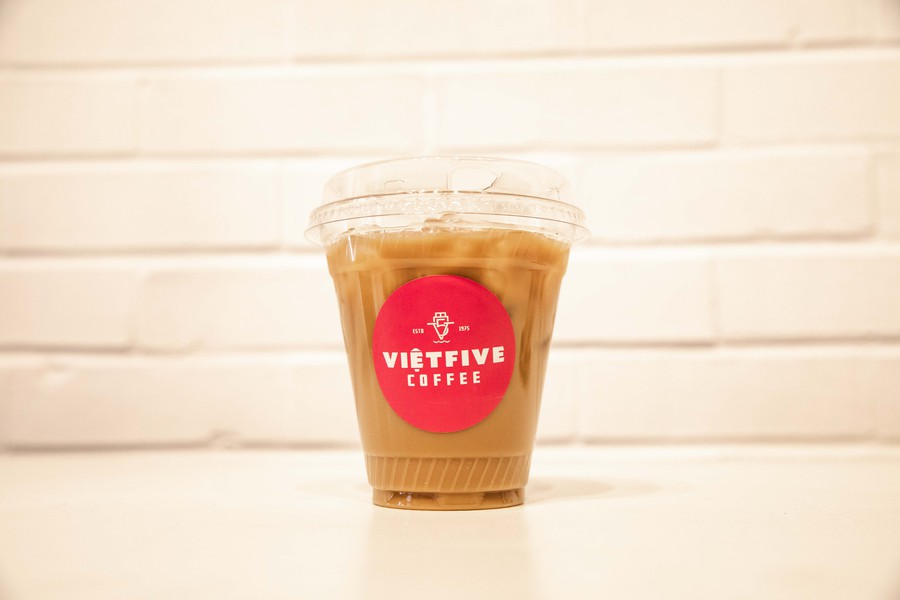 Walking into this humble coffee shop in Chicago’s West Loop, one will be greeted by the crisp, bright beats of Vietnamese pop music. Despite the rain pelting against the pavement on this particularly gloomy Sunday afternoon, the founder and owner of the shop Tuan Huynh greeted us with a warm smile, making the less-than-ideal weather fade into the background.

I had my initial reservations—I prefer to be able to taste a hint of bitterness in my coffee, rather than masking it with too much sugar or milk. Vietnamese coffee, in my experience, tends to fall on the sweeter side. But VietFive’s cà phê sữa đá, made with Robusta beans and brewed traditionally through a phin coffee filter, manages to create a low-acidity coffee that balances the bold bitterness of the Robusta with the warm sweetness produced by the supporting act (we tried the condensed milk and oat milk options). It helps if you like coffee for its energy-producing qualities: Robusta coffee beans contain twice the caffeine that Arabica does. Four hours later, I could feel the gentle hum of caffeine running through my body on the bus ride back. If you prefer something a bit more solid, their VietFive soft serve is an exceptional option as well.

But what does it mean to Huynh to open the first Vietnamese coffee shop in Chicago? To him, it’s about sharing his story and culture. VietFive’s coffee is grown and harvested from his family’s farm in Vietnam, where his family emigrated from in 1981. After the fall of Saigon in 1975, they were displaced from their home and into the central highlands of Vietnam. There, they first came into contact with Robusta coffee, a type of bean introduced to the region through French colonization. After the incarceration of his father’s side of the family and their subsequent release in 1981, Huynh’s family quickly escaped the country. “[At three years old,] I was the youngest on the boat of 55 people,” Huynh recounts as he sat across from me at a circular table. After a few months at a Malaysian refugee camp, Huynh’s family finally landed in the United States.

“Growing up from being an immigrant to the U.S. ...was difficult,” he tells me. Their family had lived in government housing in a low-income neighborhood—they were “a minority within a minority group.” This sense of alienation was a weight Huynh carried on his shoulders throughout his adolescence and was one of the reasons why he ran into his fair share of trouble. While he reflects on this experience with a tone of regret, there is also a sense of pity for his younger self. “You’re different. You’re poor. You know what I mean?” He makes a grasping motion with his hands, as if to make sense of it all. “It was hard to come up with the reasoning [as to] why they don’t like you.”

But as Huynh grew older, he began to understand why. “When you don’t understand something, you find that you can respond in a certain way,” he explains. That was the seed that eventually grew to become VietFive—a place where people could not only be exposed to Vietnamese culture for the first time but would also foster cross-cultural empathy and understanding.

“I’m really looking at [a] community like this,” Huynh says as he interlocks his fingers together, “more of a shared humanity approach. You know, in a transcultural, not a multicultural [way].” You can see it in the way that Huynh interacts with his patrons: welcoming them inside, chatting with them at their tables, creating relationships and connections. It’s also this transcultural quality that is embodied in Huynh’s food. Here, the Bánh Mì Empanada is a standout, uniting the mellow flavors of the Vietnamese bánh mì (traditionally a baguette sandwich with pickled vegetables, cucumber, cilantro, and protein) with the soft shell of the empanada.

As for his future hopes, Huynh continues to emphasize that he plans to spread the beauty of Vietnamese culture. “If another Vietnamese coffee shop opens up down the street from me, I’ll be joyous... [because] that means there’ll be more people drinking Vietnamese coffee,” he smiles. His shop is a representation of one of the many unique Vietnamese stories, which he ultimately tells me is something that nobody can truly compete with. He wants to use the space to host community events and create access to the arts, inspired by his previous experience as an art director. He muses on potential plans to expand VietFive across the city, or perhaps even to another city. “That’s why I say caffeinate the world with Robusta goodness,” he laughs.

At the end of our interview, Huynh scans his eyes around the space and then at the white brick wall behind me. He tells me that I’m welcome back anytime if I ever want a place to study. “You won’t be chased out,” he reassures me, explaining that was why he decided to paint the walls white: to give it an open, welcoming atmosphere. Even as I write this now—ironically, sipping on a cup of iced coffee—I find myself craving the smooth sweetness of VietFive’s cà phê sữa đá, and I hope I’ll be back soon. If you ever find yourself in the West Loop, in need of some extra caffeine or a study session with the buzz of Asian pop in the background, check out VietFive on 1116 West Madison Street.