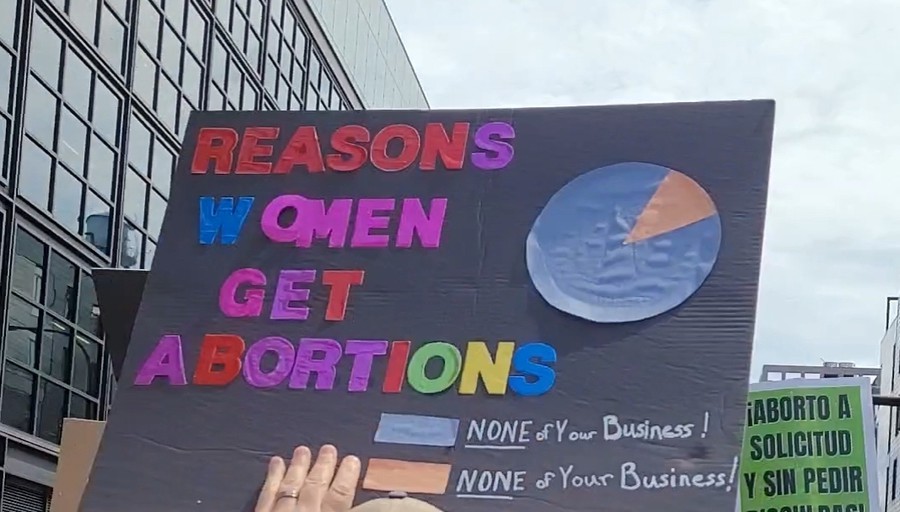 On Saturday, May 14, a group of UChicago students traveled to Wrigley Square to advocate the protection of abortion rights and protest the Supreme Court draft opinion that would overturn Roe v. Wade.

The trip to Wrigley Square was organized by third-year Zoe Torrey, a member of the recognized student organization Project Reproductive Freedom (PRF). Since the draft decision was leaked on May 3, PRF has seen many new members looking to get involved.

When they reached Wrigley Square, Torrey and the 11 other UChicago students who came with her joined hundreds of Chicagoans on the Millennium Park field before the march began. Protesters held up signs that read “Forced Motherhood = Female Enslavement,” “Bodily Autonomy Should Not Require Legal Precedent,” and “No Uterus, No Opinion,” among other phrases. Speakers at the rally included First Lady of Chicago Amy Eshleman, Illinois Lieutenant Governor Juliana Stratton, and representatives from reproductive rights groups such as the Midwest Access Coalition and Women’s March Chicago.

In her speech, Stratton expressed concern that repealing Roe v. Wade would violate bodily autonomy and human rights. “I am angered by the effort to turn back the clock, treating us like second-class citizens, being told that our bodies are not our own. But today, we are turning our pain into purpose. We are turning our anger into action. Abortion should be safe, legal, and accessible to anyone who decides that that’s what’s best for them and their future. Because in this country, we should not be criminalizing health care. We should be expanding access to health care,” Stratton said.

Eshleman encouraged the crowd to support reproductive freedom through voting and donations. “Today we march. Tomorrow, we give up our time and resources to great organizations [like] Planned Parenthood, Equality Illinois, the ACLU. We vote. We vote! And we lift up our fierce Chicago voices so loud that they reverberate across the country, especially at 1 First Street, Washington, D.C.,” she said, referring to the location of the Supreme Court.

Torrey shared Stratton’s belief that individuals should be able to have autonomy over their reproductive realities. “It’s not that I see abortion access or abortion as this monolithic issue, but it’s all part of this larger issue. It's intersectional with so many other things…regarding how people can live their lives in maximally safe and productive ways. I think bodily autonomy is an enormous part of that,” Torrey said.

When asked about how she would engage in discussion with an opponent of abortion rights or with someone who did not share her views about bodily autonomy, Torrey responded, “I would first want to understand why they are opposed to abortion. A lot of people talk about fetal viability as their first issue and there are statistics to show that the vast majority of abortions happen in the first trimester, long before the fetus is viable. I think sometimes it’s about understanding what narrative they’ve mobilized around…and seeing if there’s any factual information that they might be missing.”

Torrey did clarify that she bears no grudges against those whom she called “anti-choicers,” stating, “I do think everyone is entitled to their opinion, even if I think it’s the wrong opinion. I also think that you can be anti-abortion and not get an abortion and not encourage your partner to get an abortion. But the architecture of the movement that abortion is murder or that you’re doing a horrible thing by allowing abortion to be legal…I just think that it’s a very sensationalized opinion. It’s not really reflective of the accuracy, medically, of what’s going on.”

Torrey also offered some advice for those who wish to engage with movements but don’t want to protest or engage with opponents, saying, “[It’s] okay if you don’t find protesting effective as long as you have some sense of another way that you want to make your voice heard, whether that’s calling your representatives [or] joining monetary campaigns... if you care about an issue, there are a myriad of ways you can ‘choose your own adventure’ as to how to get involved.”