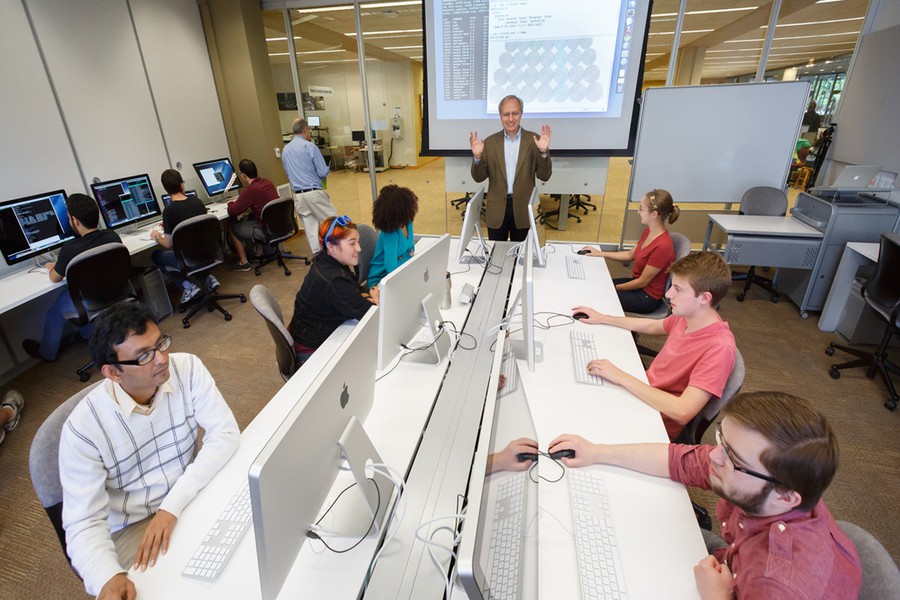 This June, some fourth-years will be part of the first graduating class for new majors and minors.

The Maroon interviewed fourth-years Alina Kim and Noor Elmasry, who are both among the first students to graduate from their respective programs. Kim will graduate with a minor in Media Arts and Design (MAAD) and Elmasry with a major in data science. Both attested that these programs made their UChicago experience more fulfilling.

Previously, MAAD and data science were only available as minors, but last year the College announced that students could major in them beginning in the 2021-2022 academic year. Both majors require students to complete a capstone project. In the case of MAAD, students prepare projects based in various types of electronic media, while data science majors complete their capstones by working with companies and groups within their industry.

Kim liked MAAD because the program and its courses allowed students to pursue their own interests. When they asked Jon Satrom, the professor teaching the ARTGAMES course (MAAD 20500) that they were taking, about studying death in video games for their capstone colloquium project, Satrom replied, “Do whatever you want, man.”

"Media Arts [has] probably the most unhinged classes I've taken because the professors are really open to whatever you want to do,” Kim said.

Elmasry, who had previously considered majoring in physics and philosophy, especially appreciated the interdisciplinary aspects of the data science major. “Knowing that I was going into a STEM [program] that had things that were thought of as philosophical... really drew me in,” Elmasry said. “That's also why I was interested in physics and philosophy in the beginning. Those already seemed interdisciplinary, so knowing that that was also going to carry over to data science was really big for me.”

Before they could complete their programs, both Kim and Elmasry had to finish a capstone project.

Kim explained that for MAAD, the colloquium took place in the winter quarter, and students had flexibility in choosing topics. They chose to focus on video games, creating a text-based game and music to go along with it. While most of Kim’s peers also focused on video games, one person created art by linking a projector to radio wave signals, while another worked on a project analyzing how Google tracked her.

Elmasry said that for data science, seniors needed to complete a capstone individual project and then a group project that spanned two quarters. “I partnered with The 11th Hour, and that’s really like an industry experience. You’re working with a team the entire two quarters on the same problem with partners of the University to solve very real data science problems in the world,” Elmasry said. “It was super exciting to be able to structure your own workflow and see the difference that your work is making.”

Kim, who also double-majored in political science and history, suggested that it would be easy to work on another major alongside MAAD. Kim’s thesis for the political science major, which concerned the rise of white supremacy and conspiracy theories in the age of QAnon, even overlapped with their work for the MAAD capstone project.

They said MAAD “is a good contrast [with the political science and history majors] but I’ve also seen a lot of overlap with the research that I do with MAAD as well as in political science for instance. I study a lot of death in politics because I do a lot of things on white supremacy, and something that’s caught the attention of me very recently is QAnon and how they’ve been using technology to find conspiracy theories and spread them around social media.” They used the concepts from their political science classes to then create a “text-based game” based around conspiracy theories.

Similarly, Elmasry attested that it is feasible to double major in data science and another major. She said “at least fifty percent, if not more” of the classes have philosophical and ethical elements and that data science is the type of major that students interested in either STEM or the humanities can enjoy. She also added that it’s “not too hard to double major with data sciences and something else,” especially if the other major was “relatively small” as philosophy is.

MAAD and data science are relatively new programs that are still evolving, but both Kim and Elmasry seem optimistic about their majors’ futures. Both had advice for the students that follow in their footsteps.

Kim suggested that people starting the MAAD major shouldn’t be shy to share their interests, no matter how niche, with their peers. “There are so many weebs on this campus and y’all never come out of the closet and tell me which one of y’all are weebs...I was like, we should watch anime together...and I didn’t get a single response.” They also advised people to focus on creating new problems rather than solving existing ones. “Out of that, you can create something that makes your study meaningful to you.”

Elmasry encouraged students to follow the prescribed curricula of the major, attesting that accidentally starting off with more difficult classes made her data science experience more challenging. “It will be really telling for the major and the program to see how well they keep up with industry—what materials are being used, different programs, different libraries even—because [the data science industry] is something that is changing very rapidly,” Elmasry said.