A brief history of the UCPD 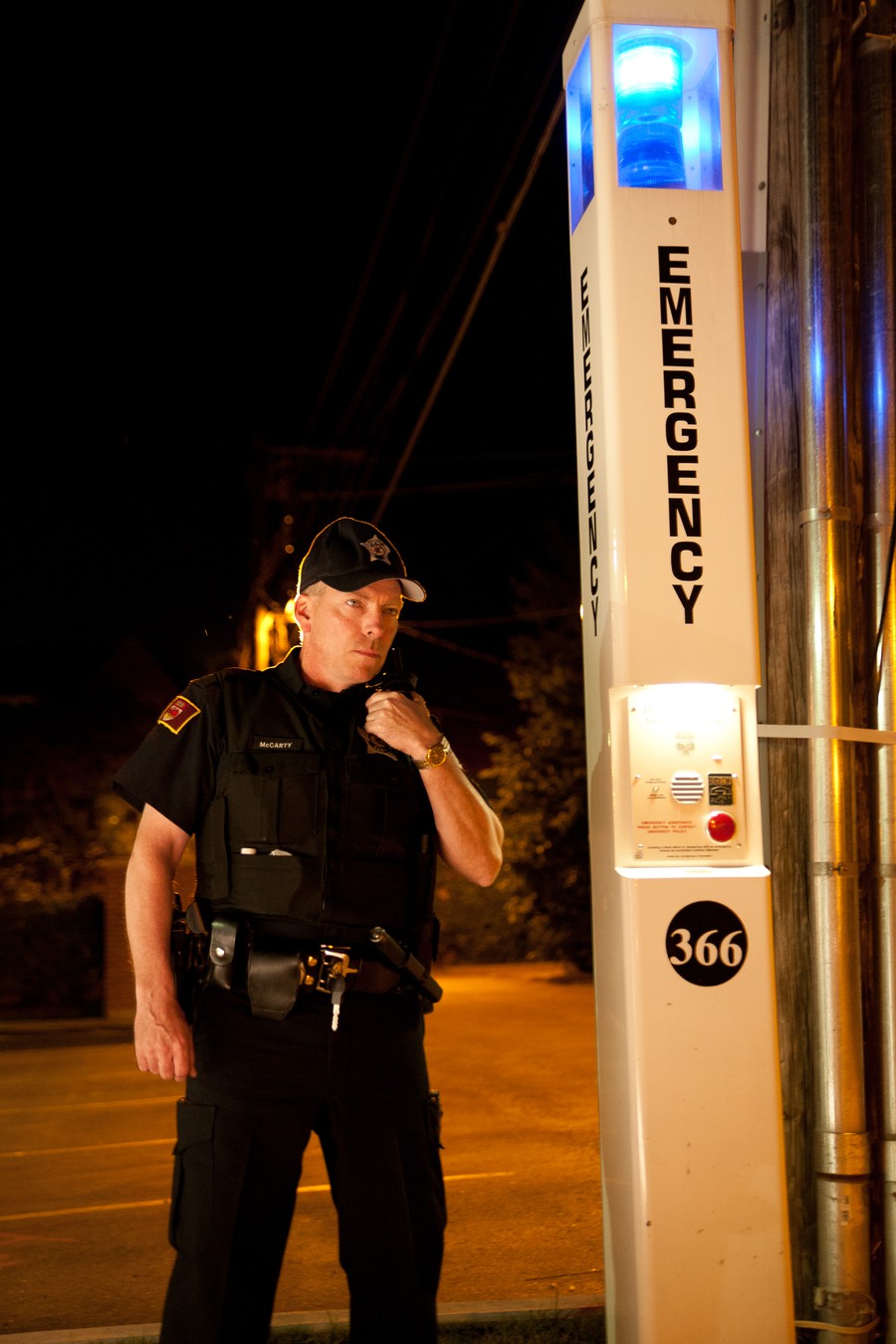 A sign outside the glass structure located at 6054 South Drexel Avenue reads “SAFE BABIES, SAFE SPACE, SAFE HAVEN.” Only a few feet away stands a blue emergency phone, one of the 329 present on the University of Chicago campus. South Cottage Grove Avenue lies a block to the west, and South Lake Park Avenue nearly a mile away to the east. These are, respectively, the western-and eastern-most boundaries of the University of Chicago Police Department’s (UCPD) patrol district. Along with East 64th Street to the south and East 37th Street to the north, these four boundaries enclose two districts of the city’s total of 25: districts 2 and 21, the latter ranking the 5th safest in Chicago.

This building also houses the Department of Safety and Security, which includes the Univer- sity of Chicago Police Department. From the offices within, 6.5 square miles and 65,000 people are monitored and protected by officers, security guards, and dispatchers. The Department employs about 140 officers with full police powers and operates on a budget of $5.5 million a year.

Although clearly a formidable institution, it was only formally created about 40 years ago and has only recently become known as a police department. And while the UCPD is one of the largest private police forces in the country, its history exists only in archived reports, scattered newspaper articles, and the memories of its employees.

“There are no firm records, it may surprise you, on either the Department or on the history of the Department,” said Robert Mason, the Public Information Officer of the UCPD.

The UCPD was not formally created until the 1960s, but its origins lie in an early form of basic security for the University. According to Mason, “it started out when they had security officers back in the ‘30s, and each division of the University would hire one or two people to be their security officers.” Many of the officers also served as the janitors for their respective buildings.

A greater culture of safety and protection can be traced to the University’s role in urban renewal in Hyde Park and Kenwood and the creation of the South East Chicago Commission (SECC) in 1952. The 1950s saw a greater concern in safety in the area, as neighborhood residents grew increasingly concerned with the state of dilapidated buildings and unsavory businesses.

“In February of ‘52, there was a faculty wife assaulted and robbed on the Midway,” said Mason, who also served as the executive director of the SECC from 1982 to 2009. “That seemed to be the straw that broke the camel’s back. Numerous faculty members and senior staff members went in to see the Chancellor...and de- manded that something be done. Either move the University out of this horrible area or do something to clean [it] up.”

Safety was the primary goal of the SECC, and it used security in addition to neighborhood programs and building renewal in order to achieve it. According to the same annual report, “secu- rity for residents and businessmen and visitors in our community is of primary importance.... Results of these efforts have paid off in better patrolling of our streets, good deployment of manpower, and a subsequent decrease in crime.”

Though the SECC described its security’s function as “day-by-day cooperation with local police from patrolmen to supervising captain,” its first law enforcement officers were hired not to patrol or directly maintain safe areas, but often to force out undesirable businesses.

Peter Rossi and Robert Dentler’s 1961 book on the subject, titled The Politics of Urban Renewal, claims that the Commission first hired two private police officers for use on one case: to investigate a hotel in which criminal activities were rumored to take place. The information the officers collected was ultimately used to have the hotel foreclosed, and the tactic was later repeated to clear out other buildings. In total, 101 acres of property were torn down during urban renewal.

It was only a few years after the SECC hired policemen that the University began creating what would become the UCPD. In 1968, the International Association of Chiefs of Police helped develop the University’s security de- partment into a more full-fledged police department, and hired the UCPD’s first director, James Delaney, a retired CPD captain.

In 1989, Rudy Nimocks retired from the Chi- cago Police Department and became the UCPD’s Chief of Police. The first item on Nimocks’s agenda was to make the UCPD a fully certified law enforcement agency.

“When I first got here, I discovered that even though the police officers at the University of Chicago Police Department had received their training in a certified training facility...they still hadn’t gotten that [Illinois Local Governmental Law Enforcement Officers Training Board] cer- tification,” Nimocks said. “Within a couple of months it was done.”

Though the UCPD wasn’t formally certified, its officers still had full police powers because of the Private College Campus Police Act, an Illinois law allowing the Board of Trustees of a private college or university to maintain a cam- pus police force. The law is designed to accommodate universities in areas with high crime rates, according to Nimocks.

While the actual powers of the UCPD were not affected by its certification or lack thereof, simply achieving it was the first step for a number of changes. Nimocks began to hire more full-time officers rather than part-time officers, many of whom also worked as CPD officers and composed the majority of the force at one time.

The Department, because of its higher status, was then able to start using patrol cars with sirens and emergency lights, which it didn’t use prior to its certification “because the idea at the University was to have it as a kind of low-profile security department,” according to Mason.

Gaining certification was also the UCPD’s first legal step toward expanding its jurisdiction to cover nearby areas.

“I convinced the University that it may be a good idea to expand the geographic jurisdic- tion to the connecting areas on the premise that we had a lot of people who came over into our area to commit crimes who live right next door, and then there was the fact that the University wanted to put charter schools in those neighborhoods,” Nimocks said.

The first expansion in the UCPD’s district was from East 61st to East 64th Street. The second expansion was from East 47th to East 39th Street, which has since been expanded to include East 37th Street due to the opening of Donoghue Charter School in 2005.

In the past decade, the UCPD has seen more changes, including its partnership with security company AlliedBarton in 2009 to bring more security officers to campus, as well as the building of light towers on the Midway in 2010. According to the University’s community safety Web site, the “budget for police protection has increased by more than $1 million in the past three years,” and crime rates in 2010 and 2011 in the Hyde Park–Kenwood area were some of the lowest in decades.

The Department also aims to gain further in- dependence from the CPD within its jurisdiction by December of this year. According to Mason, “We’re not going to be doing anything more than we’re doing now, it will just be more official.” Proposed changes include a lock-up, sending reports directly to the state, and hiring detectives to assist with investigations.

While some may see these increased powers as extreme, especially for a private police force, the Department aims to protect students and community members in whatever way it can.

“That’s the primary responsibility of any public safety agent, is that they are able to prevent crime,” Nimocks said. “That’s the hardest part of their responsibility, because obviously you can’t be everywhere at the same time. But you try to do it the best you can with the resources you are allowed.”