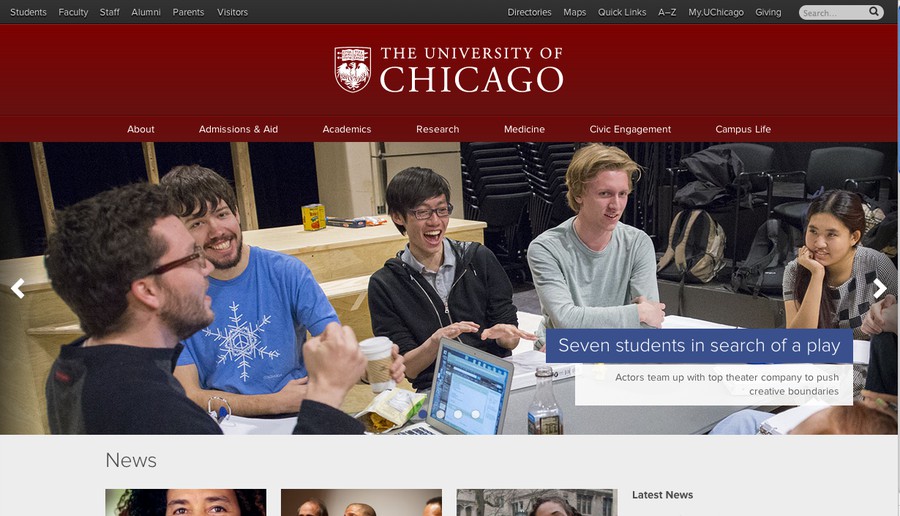 The University Web site was awarded the 2013 Webby Award and the People’s Voice Award for best Web site in the School/University category.

What does UChicago have in common with Kevin Spacey, Frank Ocean, and Jerry Seinfeld? All will be awarded a Webby Award in a star-studded ceremony held in New York later this month.

The University of Chicago’s Web site won both the 2013 Webby Award and the People’s Voice Award in the category for School/University Web sites, the International Academy of Digital Arts and Sciences (IADAS) announced on Tuesday.

The current Web site was launched in September 2012 after a redesign by members of IT Services’ Web Services unit. Project manager Stacey Shintani, front-end developer Jack Auses, and graphic designer Andre Marques spearheaded the project. This was the site’s first major redesign in four years.

“We are really proud that we won, but we are proud of the site even if we didn’t win,” Shintani said. “Everybody in Web Services touched the project at some point. It was always a really huge group effort.”

The improvements included changes to the site’s interface and navigation and enabled it to accommodate different browsers. In the future, Web Services hopes to make more regular changes to the site instead of conducting less frequent overhauls.

“We are hoping to go to a model where, instead of having a major redesign every four years, there would be regular developments on the site so that it is constantly evolving,” Auses said.

The winners of the Webby Awards are decided by members of the IADAS. Members include David Bowie, Arianna Huffington, and Twitter co-founder Biz Stone. The People’s Voice Award is decided by the general public, and the University’s Web site led by about five percent moments before the polls closed last Thursday.

Shintani credited the University community for their win.

“It was just a great site that worked well with the users, who really took pride with being affiliated with UChicago,” she said.

The team of three will travel to New York to attend the award ceremony on May 22, hosted by comedian Patton Oswalt.

“The Webbys are like the Oscars of the Internet.” Shintani said. “We are thrilled.”