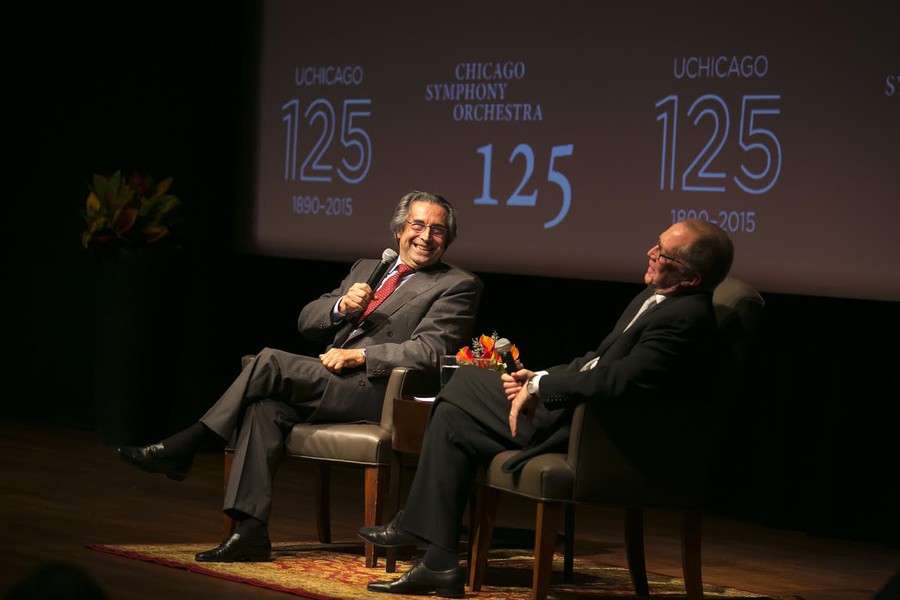 By Hannah Edgar    and MJ Chen

In recognition of the institutions’ shared 125th anniversary, the University of Chicago and the Chicago Symphony Orchestra (CSO) sponsored a public discussion between CSO Zell Music Director Riccardo Muti and program note annotator Philip Huscher on September 21. The talk, which took place at the Logan Center, was preceded by opening remarks from University President Robert J. Zimmer, who offered an overview of past exchanges between the University and CSO and a preview of joint projects to come.

Symphony patrons who know Muti only by his intense podium presence are often disarmed by his ebullient humor and wit, which were on full display during last Monday’s talk. The maestro charmed attendees with lively anecdotes, impressions of theatrical conductors, and his assessment of “italianità,” or overblown Italian caricatures, in opera.

But underneath the maestro’s quips, a deep thread of seriousness permeated the evening. Muti expressed concern regarding the direction of classical music, as well as profound gratitude towards scholars whose work has informed modern performance practice. He specifically acknowledged renowned musicologist and retired University professor Philip Gossett, who spearheaded the critical editions of Verdi and Rossini’s entire operatic oeuvre, and who was in attendance.

Before the talk, Muti generously sat down with the Maroon for an exclusive interview in the green room of the Logan Center, during which he spoke at length about what the CSO’s 125th season says about the orchestra, music’s role in society, and the changing face of classical music. 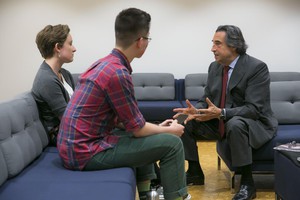 HE: In regards to programming this upcoming season, you’ve selected works of which the CSO either gave the world premiere or American premiere during its 125 year-long history. What went into planning this season?

RM: Well, I have wonderful collaborators. One is here, in fact: Philip Huscher, who is having the conversation with me. When we started thinking about the celebration of the 125th anniversary, we thought that the best thing was to go back for one season and to celebrate the orchestra. So this is not something that has to do with a conservative attitude. I think it was better in our mind to give the public an idea of the history of the orchestra. In fact, how many people know today that some works of Prokofiev or Bartók had their world premiere by the Chicago Symphony Orchestra? That says to the world that this orchestra was very open to the contemporary music of that time.

For example, there’s the story of Alfredo Casella, whose Third Symphony had its premiere here. At the end of the ’30s, he met Frederick Stock, the second conductor of the Chicago Symphony, in Venezia [Venice]. And this is interesting, that at that time, without email—without iPod, iPhone, iThink, iDunno—there was a tight liaison between the two continents. It says very much about the cooperation of musicians in the two different parts of the Atlantic—things that today, even with all the possibilities of communication, seem to have become more complicated. It’s not that it has become more complicated, it’s that culture is going generally in directions that are not so brilliant. In one word, the culture is going down—not the people of culture, but the interest in culture from the governments around the world.

MC: You say that interest in culture is going down, and you said in a previous interview that our future is culture. With these two things in mind, what do you imagine the culture of the future looking like?

RM: I think that the mixture of different cultures—the Asian world, the South American world, et cetera—these together will create a much more interesting cultural world, and the communication between people will be much tighter. Before, culture was sometimes an element of division. Now, the new world is based on the integration of different cultures, from which can come a new culture that can become more like brothers.

I have direct experience with this, because every year [with the Luigi Cherubini Youth Orchestra] I do a concert that’s called “Concert for Friendship.” And we go to different places—we have been in Sarajevo, in Beirut, in Moscow, in New York after the towers [fell]—and ask musicians of the troubled place to join with our musicians and to play together. This has been very positive. Instead of having these bad feelings that old people still have, the younger musicians become friends—they love each other, sing together, play together. So in the name of the music and with the help of the music, they are able to look to the future and not look to the past all the time. This only music could do.

HE: I was at an open rehearsal of yours with the Civic Orchestra, and you surprised me by saying that the world is losing its artistic values. How can we regain those artistic values, if our generation is losing them?

RM: First off, the basic element is education—if you teach kids how to move in the world of sounds, to interest them in the world of a symphony. It should be done in such a way that it becomes a pleasure and a discovery, not a punishment. Then, when they become adults, they will feel that they need this spiritual bread. But if you leave them in complete ignorance, you cannot expect that at the age of 20, 25, they will go into a concert hall to hear the [B minor Mass] of Bach or the Missa solemnis of Beethoven. It will be like being in an unknown world.

There is another thing: In the last [several] years, we have become a visual society. So instead of listening to the music, we want to see conductors exercising on the podium, pianists that communicate with God while playing, violinists that try to impress the public with sexy attitudes…All this didn’t exist 30 years ago, 40 years ago. Today, with television and other things, people are interested in what they see. Nobody speaks about the spiritual integrity of these [artists]; what they are conveying to the public.

So something dramatic is happening. And instead of helping the public to become more concentrated on the substance of what art is, we are following them—giving them candies instead of vitamins. The next time you go to a concert and see a conductor who moves more than is necessary, and opens his mouth like a shark, you have to boo.

MC: I’ve been waiting to do that! North American audiences always give standing ovations, no matter what.

RM: Yes. If the concert ends loud, you can be sure of its success. Because the public, when it is not educated, reacts to the physical impact of the sound.

So we please them, and we are ruining the quality of the audience. But this attitude that we still have of musicians in tails—dressed like penguins—and all this ceremony that has been going on for more than one century… This is something that is not helping the music to become [universal]. I want to see the moment in the future—I hope before I disappear from this planet—when [orchestras] do what I’m doing already in rehearsals, which is speaking to both the musicians and the public. That way, the public becomes an essential part of the process.

We have to change the world. Not “we”—you! You are young, after all.

The University of Chicago and the CSO continue their joint celebrations with the following events:

Chamber performances by CSO musicians at Burke Elementary in Washington Park (November 16 at 4 p.m.) and at the Apostolic Church of God in Woodlawn (date TBD)

The premiere of an original composition by Assistant Professor of Music Anthony Cheung, given by Civic Orchestra musicians during the University Ceremony of the 525th Convocation (December 11 at 2 p.m.)

Further details will be posted on 125.uchicago.edu.