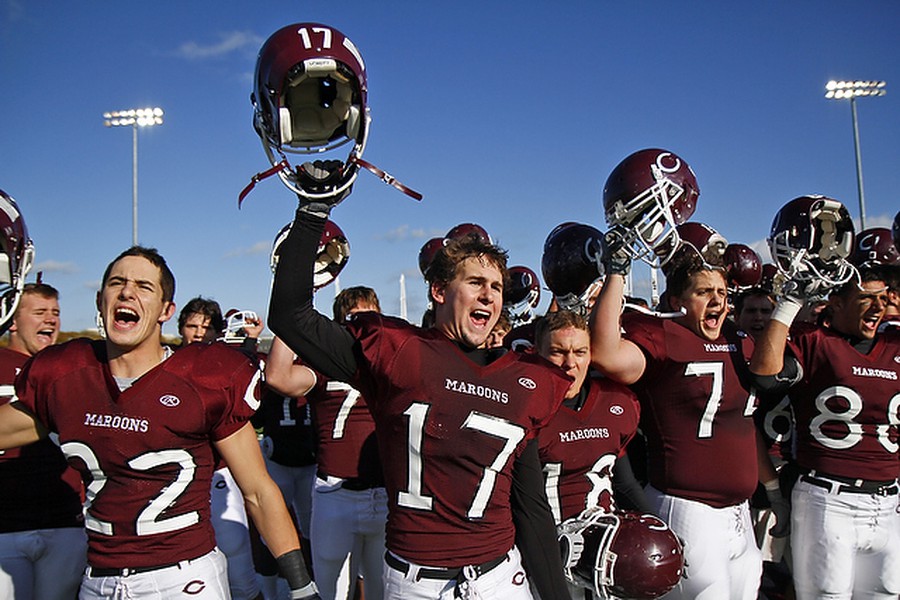 While third-year quarterback Marshall Oium was busy setting the Chicago record for passing yards in single game Saturday, Ron Grenda (X ’69) was in the stands, recalling a time when people were surprised that the Maroons could even catch a pass.

“Outside [Crown] Field House, one of the trustees came out and he wanted to see what the football team looked like,” Grenda said. “So we put on some special pass plays, and we actually completed some passes, and he said ‘Looks like those guys can play some football.’”

Grenda, along with a dozen or so of his teammates from the 1969 football team—Chicago’s first varsity football squad since the 1930s—were on hand to watch the 2009 Maroons top Denison 38–7 in Saturday’s homecoming game. The game was just part of a weekend that included a tailgate buffet in Bartlett Saturday morning and Chicago Athletics Hall of Fame inductions Friday night.

The Maroon faithful were still finding their seats for the Denison game when six of the players from the 1969 team walked out to center field, there to serve as honorary captains for the pre-game coin flip. After shaking hands with Denison captains a third their age, the old-timers won the toss—the group’s first victory since beating North Central Junior Varsity 12–0 forty years ago—and elected to receive.

The players, some with grandchildren in tow, were recognized individually at halftime. Standing on the track, they seemed a small group for a football team reunion—college rosters can top 100 players—but they represented a majority of the 25 men on the 1969 roster, two of whom have since passed away.

Grenda said he was especially pleased to see the Maroons together again, since the group hadn’t kept in touch after leaving Chicago.

“I tried to find some of my old teammates and I couldn’t. I lost track of everybody,” Grenda said. “The names were the same, but the people just went their own ways.”

They were all present to accept their awards and to listen as Lester Munson (J.D. ’67), the ESPN legal analyst who led the ceremony, heaped praise on their careers at Chicago. Also honored were Harry Frieda (Ph. B. ’25), who won an NCAA Championship in javelin in 1923; Marie Ortmayer (Ph. B. 1906, MC ’17), the original president of the Women’s Athletic Association; and Ken Rouse (Ph. B. ’28), the Big Ten MVP in football in 1927.

The Hall of Fame inductees all have NCAA and statistical championships to their names, UAA and Big Ten titles, and all-time Maroon records; none of them were dark horses to become Homecoming honorees. But for the undermanned football team that, 40 years ago, went 2–4 against a slate of mostly J.V. squads, making it to homecoming as guests of honor seemed a funny twist of fate.

For 13 seasons before regaining varsity status in 1969, Chicago football existed as a club or a “class”—and even that wasn’t without controversy. In 1963, hundreds of students descended on the field before a scrimmage against North Central J.V., forming a line along the 50-yard line and forcing the players to the sideline.

The protesters, who were organized by several Student Government officials, carried signs with slogans like “I am a boor” and “Hutchins is our leader,” a nod to President Robert Maynard Hutchins, who axed Big Ten football in 1939. At the Hall of Fame ceremony Friday night, Edward Turkington, who retired as Dean of Student Services in 2001 after 38 years in the University’s administration, recalled that one protester excused himself early to play in his house’s IM flag football game.

Ultimately, the football team and its boosters, with their chants of “We like football,” carried the day: the police dispersed the protesters and took a few away in a paddywagon. The game went on.

By 1969, football on campus had gone from a charged issue to a non-issue. “I heard about protests, but I never saw any,” Grenda said of the transition to varsity. “In fact, a lot of people didn’t even care, one way or the other.” He remembered only a handful of spectators turning out for the team’s games.

Maybe Grenda and his teammates have gotten more popular through the years: Hundreds of fans were on hand to cheer for them (and the latest generation of Maroons) Saturday.