Edwin Hubble got another chance to globetrot this summer thanks to fellow U of C alum and astronaut John Grunsfeld, who took Hubble’s championship basketball to space with him while he fixed the Hubble Space Telescope. 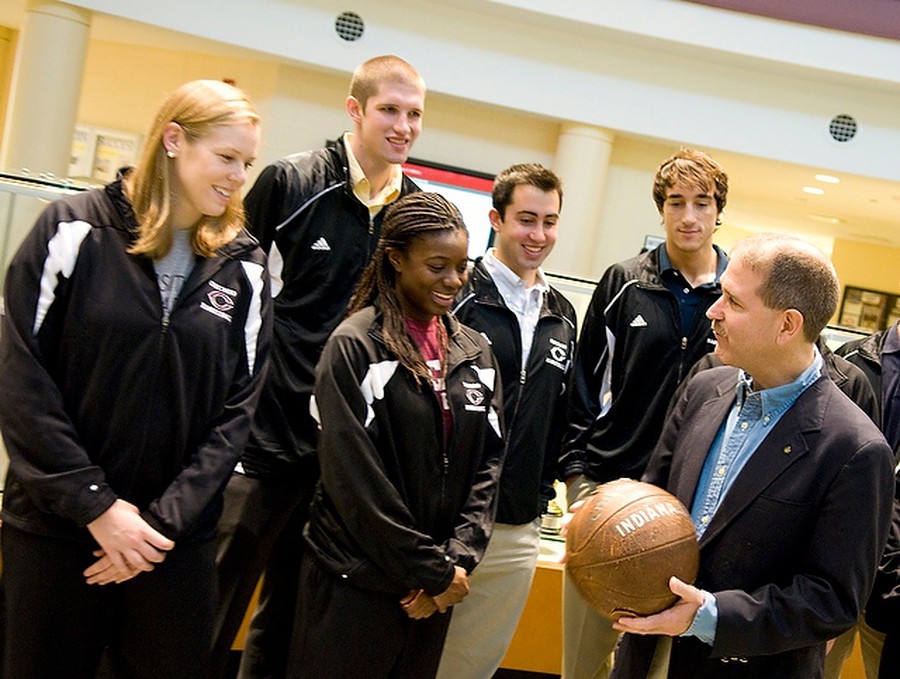 Edwin Hubble (S.B. ’10, Ph.D. ’17) got another chance to globetrot this summer thanks to fellow U of C alum and astronaut John Grunsfeld (S.M. ’84, Ph.D. ’88), who took Hubble’s championship basketball to space with him while he fixed the Hubble Space Telescope.

Grunsfeld was on the court at Ratner Athletics Center this Friday to replace the ball, which he had taken up to space as a tribute to the instrument’s inventor.

Led by the famed astrophysicist, the Maroons took the Big Ten basketball title in both 1908 and 1909. The basketball, which usually resides in Ratner, is from the 1909 championship game and stands in Ratner as a testament to Hubble’s athleticism and prestige at the University.

“It’s much more than a basketball. It’s an icon of science,” Grunsfeld said.

Hubble went on to become a Rhodes Scholar and eminent astronomer and astrophysicist.

For its stay in Ratner, Hubble’s basketball was stuffed with straw to preserve its spherical shape. But straw is a fire hazard in space, NASA said, so Grunsfeld had to find a way to remove it while keeping the ball’s skin intact. Grunsfeld made a small incision in the bottom of the ball and removed the straw through the small opening.

Grunsfeld said the Hubble Space Telescope, launched by NASA and the European Space Agency in 1990, revolutionized modern astronomy with data that helped determine the universe’s rate of expansion and produced the first direct images of planets beyond our own solar system. The telescope is much more effective than its terrestrial counterparts because the atmosphere interferes with the radiation emitted by cosmic phenomena, which Hubble uses to take its readings.

More importantly, Grunsfeld said, its pictures of space have helped us to learn more about our place in the cosmos. “Astronomy is the study that helps us answer fundamental questions,” he said. “Where did the material that we’re made of come from?”

“Hubble is the pinnacle tool” to answer these questions, Grunsfeld said.

Grunsfeld, who performed three of the repair mission’s five consecutive space walks this May, said his career path was influenced by his graduate experience at the U of C. “We’d pack up our whole labs and spend months on expeditions to remote places. That kind of expedition science is very much like space flight,” he said.

Grunsfeld also worked in an experimental physics program that built scientific instruments and then sent them to space. “All of these thought processes were tools that I was then able to apply to the Hubble,” he said.

Repeated Hubble repairs are necessary since the telescope has to withstand the harsh environment of space. “Cosmic radiation is not good for the electronics,” Grunsfeld said. “Some things just wear out and break.”

The repair mission also improved much of the telescope’s technology. Grunsfeld and the crew added new sensors and better cameras, so now “it’s 500 times more productive...we go up to repair it, but really to reinvent it,” Grunsfeld said.

Grunsfeld is working on future programs for NASA, helping decide whether to retire the shuttle Atlantis and use rockets with passenger capsules instead of shuttles.

Using rockets will allow astronauts and instruments to travel from Earth’s orbit into the far reaches of the solar system.

Grunsfeld said that even in his terrestrial life, he spends much of his time looking at the stars. “I’d love to live in space on the space station,” he said.