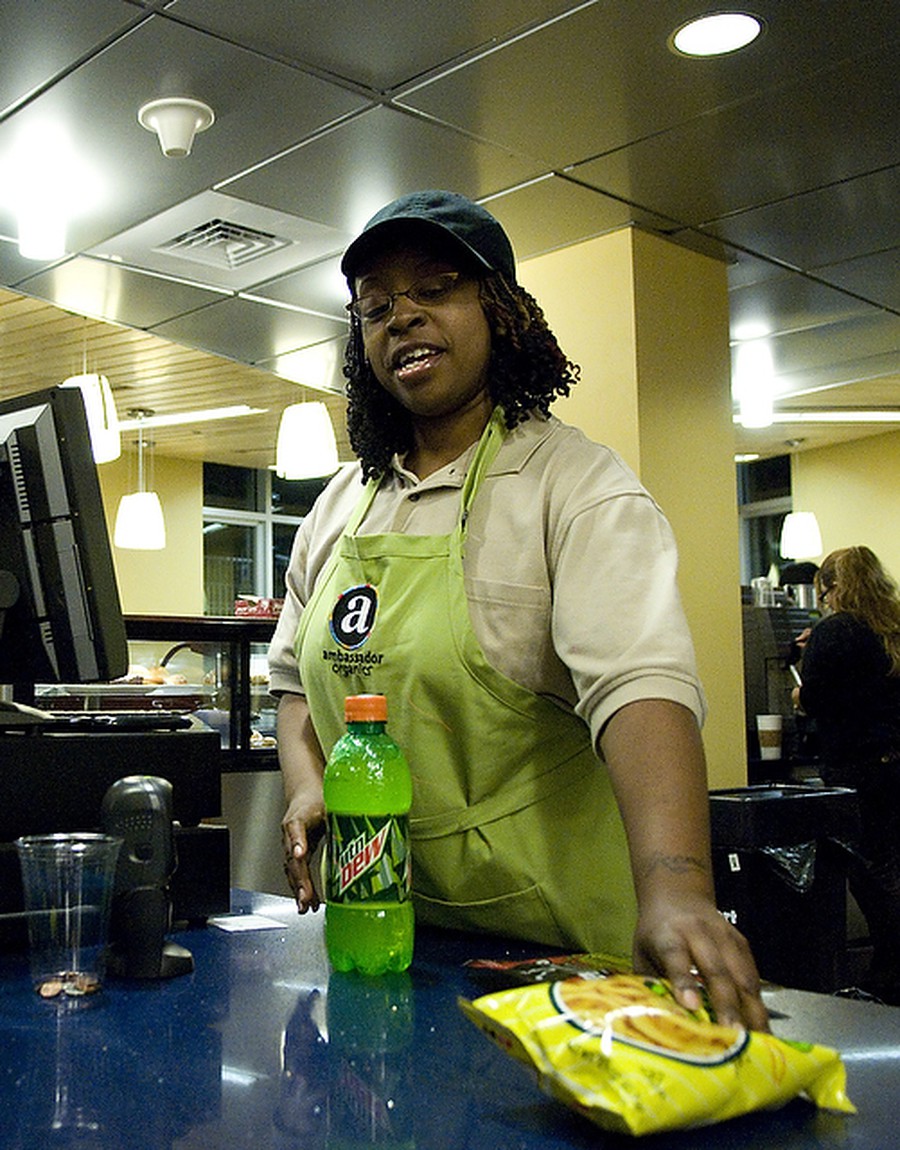 The South Campus Café and Convenience (C-Store) is facing unexpectedly slow business this quarter, an administrator said, despite its location on the most densely populated block on campus. Few are visiting the store, due to poor visibility and competition from the all-you-can-eat South Campus Dining Hall yards away.

Richard Mason, director of operations and communications for housing and dining services, said it was still too early to accurately gauge the performance of the shop, but some employees doubted it could sustain such slow business.

“Not too many people even know that this store exists,” said a cashier at C-Store. The employee, who requested anonymity because she feared management would discipline her for speaking with the press, said weekends are slowest, and estimates that only 15 customers come through the café on a typical Sunday afternoon.

Mason confirmed the café was only generating 60 to 70 percent of the number of transactions that campus dining services had originally expected.

“If it becomes self-sustaining, that’ll be a success,” he said.

Mason said there is “more significant marketing to be done,” but there are no plans to alter hours, much less close the shop, he said.

Roger Parker, a supervisor at the C-Store, confirmed that business is slowest during the day. But he emphasized that peak hours come later in the evening, between 5 p.m. and midnight, and increased traffic means word is spreading.

“Every week we see a difference, and it’s usually almost full at midnight,” he said.

Parker said that C-Store averages 90 to 100 customers a day. But having worked at Bartlett’s Maroon Market, where he estimated as having over 300 transactions a day, Parker said there’s a long way to go.

C-Store only recently put signs outside advertising its presence, and its location has made it hard for students to find and access, according to employees. Though it is adjacent to the South Campus Residence Hall (SCRH), it’s located below ground level and the entrance that is closest to the dormitory is labeled an emergency exit. The main entrance is on the far side of the building, and there is no way to access the café from the attached dormitory.

“Even people that live in the dorm don’t know about us,” Parker said. “The Maroon Market was much busier. And it’s always full on Bar Night [hosted Wednesday nights by the fraternity Alpha Delta Phi].”

To address the issue of access between the SCRH and the C-Store, Parker pointed out a series of doors that had been propped open to allow access into the dormitory without needing to go outside. He said the University was working on a more permanent solution, in which students could use their ID cards to access the dormitory from the café.

“It seriously compromises security to keep those doors open,” Mason said. “Security is something that overrules convenience.”

Although Mason and Parker attributed a lack of business to convenience issues, second-year Erin Britton, who lives in the SCRH, said that convenience is not an issue with the café. “People are really enjoying having something that’s convenient,” she said.

“A lot more people are using the dining hall now, especially for breakfast,” she said. “Most of the time [I go to the café] I’m jonesing for some Ben and Jerry’s or something like that.”

Mason said that a larger number of customers than expected are going to the dining hall for lunch. “Some of the people that we thought might just grab a sandwich or a salad to go from the South Campus Café have instead gone to the dining hall,” he said.

Mason has proposed giving out coupons, coffee mugs, and other incentives for new customers. He said they would have more ideas after meeting with the campus dining advisory board, a group composed of Inter-House Council and Student Government representatives, next week.

Parker hypothesized that students might not know the shop had more than just standard café offerings. “When you walk by [and] you see ‘Ambassador,’ you see a coffee shop, you might not know we had a store down here,” he said.

Employees said the name featured at the shop, Ambassador Organics, is misleading. The name refers to a featured brand of coffee and tea, and not all products at the shop are organic.

Some of the slow business can be attributed to more mundane problems. “There was no heating for a while,” Parker said. “People just stopped coming back.”

But he’s optimistic that the shop will succeed in the long run. He said the C-Store does have student appeal, with comfortable seating and wireless internet that convenience stores like the Maroon Market lack. And there are no other viable alternatives south of the Midway—the nearest is a convenience store at 63rd Street.

“There’s no other store around here,” Parker said. “If you know about the store, it’s do or die.”