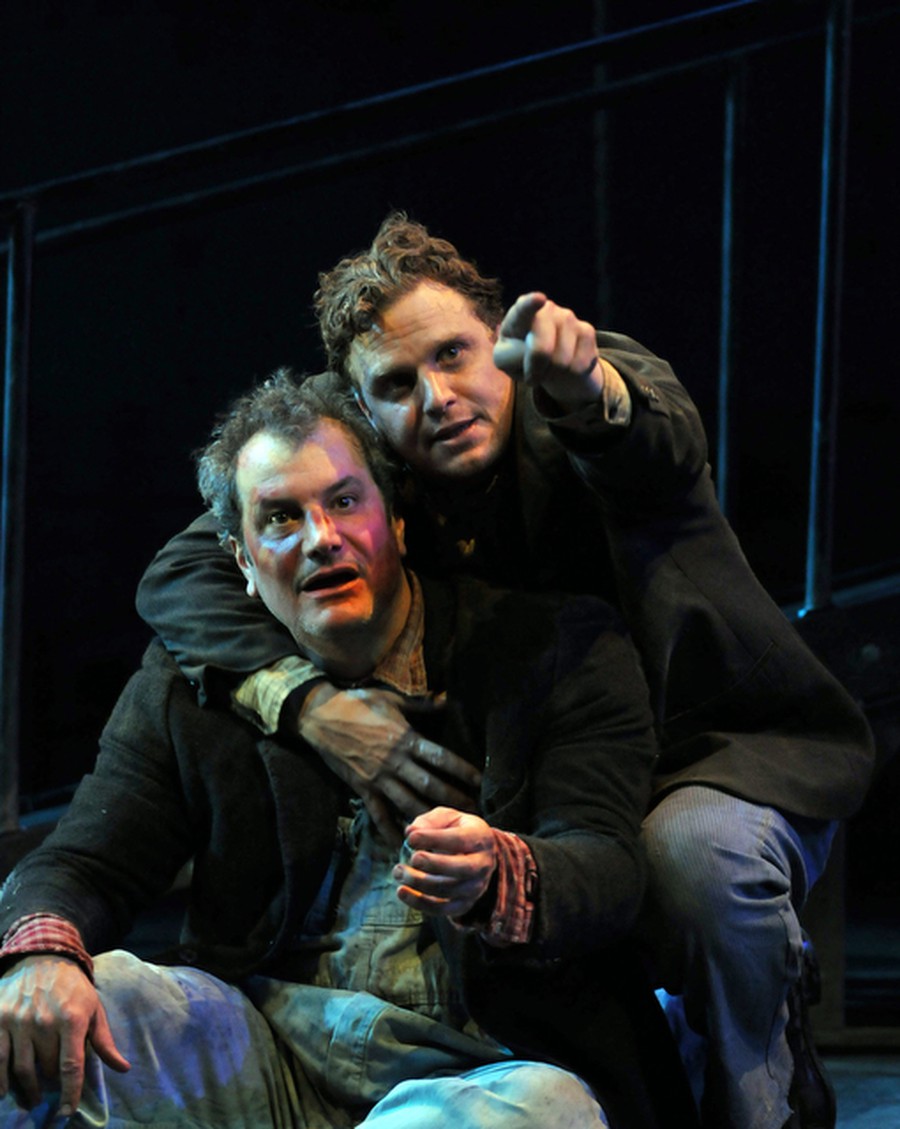 John Steinbeck’s classic, Of Mice and Men, has lasted from the Great Depression to the Great Recession because of its honest, compassionate depiction of loneliness and the perils of letting your dreams fade away. Perhaps more than at any other time since the novel appeared in 1937, these themes resonate in today’s uncertain economic climate. Fortunately, Steppenwolf for Young Adults’ production allows even audiences familiar with the novel to experience Of Mice and Men on another level.

Set in the Depression, Of Mice and Men tells the story of two men looking out for each other in a world where most just look out for themselves. Migrant workers George and Lennie take jobs wherever they can for as long as they can. Lennie, strong but slow, has a habit of running into trouble because of his childlike view of the world. The two men dream of owning a piece of land themselves, but the closer they come to achieving their dream, the more obstacles appear in their path. As George and Lennie struggle toward their own dream, they learn the fleeting dreams of some of the workers on the ranch where they work.

Performing a theatrical version of such a well-known book poses certain challenges, especially for the actors. Audience members who have read the book have certain expectations about how the characters should act and what they should look like. But Steppenwolf’s actors generally succeed in creating characters unique to the production who, nevertheless, resonate with the characters in the book. George (Paul D’Addario) and Lennie (Keith Kupferer) are especially moving, particularly during the moments in which they reveal the depths of their friendship. Richard Henzel’s Candy, a worker on the ranch who fears his inevitably approaching retirement, evokes an almost tangible desperation, as does Curley’s wife (Jessie Fisher).

However, the highlight of the production is not the acting, but the creative design. The set is almost non-existent, simply a grey floor and walls with a grey ramp protruding from stage left. Sounds and lights soften the harsh environment, transforming it into a comforting space. The props are sparse as well, with not much more than a few crates. The production instead relies on light and sound to create everything from fire to trees. At times, scenes are projected onto the back wall, or on white sheets that drop from the ceiling. In one scene, the image of the ranch’s barn is projected onto a white sheet while men play horseshoes behind it, their shadows bleeding through the image of the barn. In another, the projected set pieces spin on the back wall to give the audience the same sense of disorientation felt by George as he runs away from the ranch.

Another interesting choice was the use of a pillow to represent a puppy despite the appearance of a real dog at another point in the play. Such decisions emphasize the scarcity and harshness of the ranch. In an interview in the program notes between Steppenwolf for Young Adults’ artistic director Hallie Gordon and director Michael Patrick Thornton, Thornton reveals that he wanted to “approach the play through Lennie’s eyes; to have the audience experience the world like he does…to see the play in bright color and experience it through sound and touch.” As soon as Lennie walks onto the stage, the industrial space gains an enchanting quality that it lacks without him.

Although the production is very good, it is not without its flaws. A few of the actors fade from memory. Robert Belushi’s Curley fails to explain or defend his constant rage, making him an unsympathetic and uninteresting character. Several minor characters also lack dimensionality. To a certain extent, their flatness might be a deliberate choice. In the book, Steinbeck referred to the characters by their status (the Boss) or by a nickname (Slim) to emphasize how little people really know each other.

Steppenwolf’s Of Mice and Men explores the consequences of poverty on a group of men. Some try to merely survive, while others, such as George and Lennie, seek to triumph over their harsh existence by realizing their dream. But far more important than achieving that dream is their struggle to achieve it together and the friendship that sustains them in difficult times. Steppenwolf’s production reminds us that Steinbeck’s themes of camaraderie and hope remain relevant today.