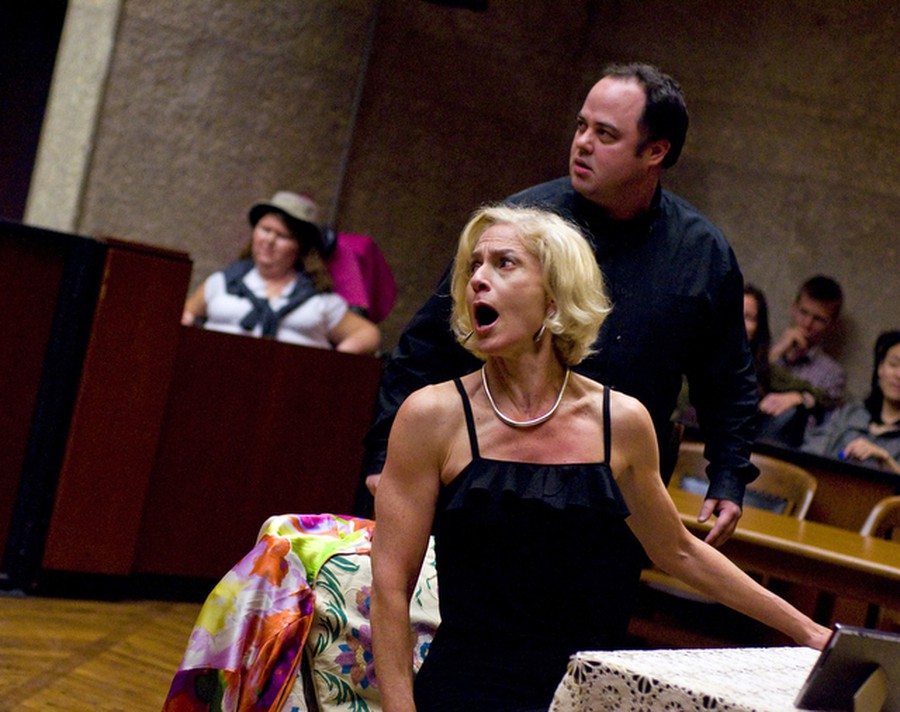 “He’s looking for the truth,” Breyer said. “And by the time he’s pretty sure what the truth is, it doesn’t matter that much anymore.”

The associate justice and former Harvard law professor spoke to students, faculty, and staff in the Law School’s auditorium as part of its two-day conference on Shakespeare and the Law. Breyer shared his views on interpreting statutes, settled on which Shakespeare character he’d like to be, and debated the reality of Hamlet’s ghost with law, philosophy, and classics professor Martha Nussbaum, law professor and appellate judge Richard Posner, and English professor Richard Strier.

Much of the discussion focused on Measure for Measure, a comedy in which the Duke of Vienna leaves the city in the care of his second-in-command Angelo, who strictly enforces Vienna’s previously unimplemented fornication laws.

“The play lets us see that the disgust with which people view sexuality is largely irrational,” Nussbaum said. “But people allow their phobic reactions to sexuality determine what law ought to be.” She added that baths and clubs in the modern era have been shut down due to “flimsy” public health arguments that merely reflect those fears.

Breyer was struck by a line in the play in which Angelo justifies a seemingly heavy-handed conviction by pointing out that showing leniency in particular cases could create an uneven system with unintended consequences. “We’re speaking to the 298 million Americans who aren’t in the courtroom,” Breyer said, updating the Bard’s poetry. “Wow, how often I’ve used that line. And how often I justify all kinds of things by it. And there it is, right there, in Measure for Measure.”

At the end of the play, the Duke returns and overturns many of Angelo’s decisions. “The easy questions come out right,” Breyer said. “But now let’s look at the hard case. What do we do with the brothels, because the Duke’s not prepared to [legalize brothels], but he is prepared to say, let’s not overdo this.”

That balancing act, Breyer said, is what judges go through when reaching their decisions. “So I say thank you, Shakespeare, you have reinforced my instinct as a judge.”

The interdisciplinary conference included performances of scenes from plays Breyer selected to discuss—As You Like It, Measure for Measure, and Hamlet—and featured performances by Breyer, Nussbaum, Posner, and Strier. Breyer played Hamlet’s ghost, a role that became the source of much discussion during the panel.

Strier, who focused on the role of evidence in Hamlet, said that besides the ghost’s allegations, Hamlet doesn’t have any good evidence proving his uncle murdered his father. Strier said Shakespeare’s audience likely doubted that the ghost was really Hamlet’s father, and perhaps thought it was a devil.

“Mostly people don’t come back from purgatory; they stay there,” Strier said. “But when they do come back, they’re more likely to say ‘Pray for me,’ since Purgatory got more hell-like as the Middle Ages progressed.”

Posner disputed Strier’s analysis. “The ghost wasn’t a devil; I mean, just look at him,” Posner said, pointing at Breyer, who first flashed a smile and then bared his teeth.

Nussbaum said the conference grew out of a seminar she’s taught with Posner for six years on literature and law, focusing alternately on George Bernard Shaw, Oscar Wilde, and Greek tragedy. Strier joined them recently to add some Shakespearean expertise to the class, Nussbaum said.

The professors had planned on holding the conference to “inject new life” into the law and literature movement, Nussbaum said, and decided to ask Breyer when they found he had an interest in Shakespeare.

“When he was a law student, he was a teaching assistant to Stanley Cavell, the famous philosopher and Shakespeare scholar…at the time when Cavell was doing his path-breaking work,” said Nussbaum, who had tea with Breyer in his Supreme Court offices to discuss the conference. “We talked about that interest, and that was part of what convinced him to do it.”

The panel quickly turned to audience questions. One question asked the panelists to choose which Shakespearean character they most identified with. Only Nussbaum (As You Like It’s Rosalind) and Strier (Hamlet’s Horatio) answered directly, while Posner commented on Nussbaum’s “sexy” performance as Hamlet’s Gertrude, and Breyer said Posner was perfect as the acerbic and intelligent Jacques from As You Like It.

Nearly 20 minutes later, as Strier discussed Shakespeare’s use of magic, Breyer interrupted with his belated response. “I think I’d like to be Owen Glendower,” Breyer said of Henry IV: Part One’s mystic. “My reason is he can summon spirits from the vasty deep. Now, I’m often in dissent and maybe that would help.”