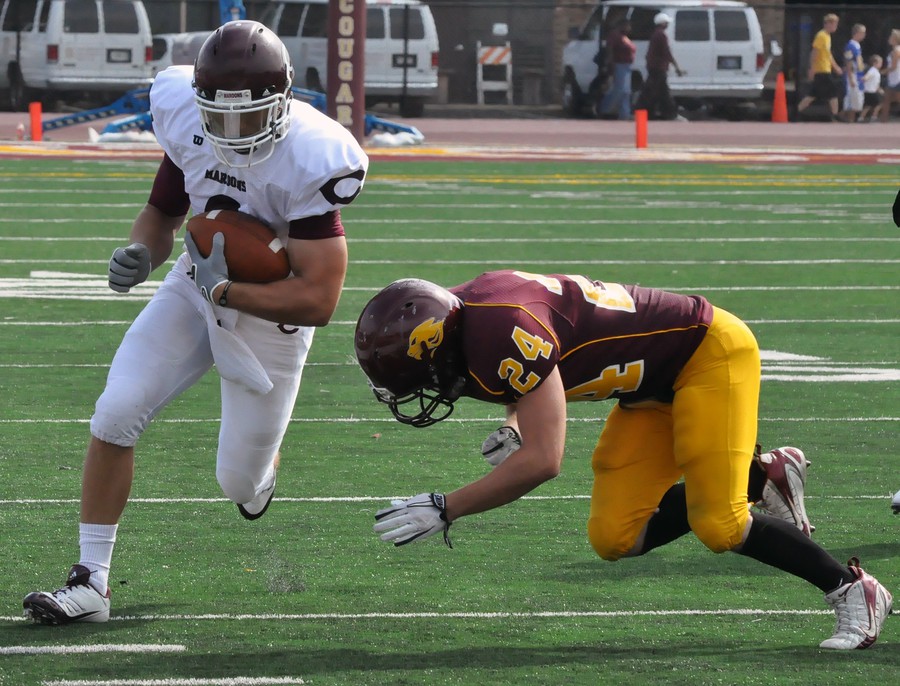 As the old saying goes, the only way to make diamonds is through pressure. The Maroons will face plenty of it as they travel to Deeds Field-Piper Stadium in Granville, Ohio this Saturday to face the Denison Big Red (3–2). Game time is set for noon.

Chicago (3–2) is ahead in the series history, 2–1, following a 36–7 defeat of the Big Red in 2010. The Maroons are coming off of a 21–10 victory over Ohio Wesleyan on October 1 and are striving for their first two-game win streak of the season.

“Denison’s a good football team. They have the same record we do. We’re playing at their place, and home field advantage in football is a big deal, no question,” Mahoney said. “It is going to be a very good football game, I think, and we’re going to have to play very well to beat them.”

According to Schuyler Montefalco, a first-year linebacker from Indianapolis, IN, the atmosphere for an away game differs significantly from that of a home game.

“When we’re away, it’s a completely different schedule. It’s just getting off your routine, being in a new place, a new bed, things like that. You just have to really focus,” Montefalco said. “It really doesn’t matter where we are. You just have to know there’s going to be a big crowd on their side, and you just have to go out and do your job.”

“We’ve just sped up the tempo in practice, just making it more game-like for the guys. Tempo is very key, and preparing guys. Beyond that, everything else–the preparation is still the same,” Moore said. “There’s a high emphasis on film study and knowing your opponent. But the aesthetic change is just, in practice, the tempo of how we’re going to do things.”

Montefalco, who led the Maroons with seven-and-a-half tackles and a sack against Ohio Wesleyan, discussed the defense’s strategy for Saturday’s game.

“Denison’s more of a traditional run team, and they’re also a faster-based offense, so we’re switching up how we’re doing our play call. [We’re] also practicing a lot more blitzes this week,” Montefalco said. “So we’re focusing more on the run game and just trying to prepare for that.”

One thing to look out for: There might be a change of quarterback, as a result of what Mahoney calls a “lack of consistency” in the position.

“We may even play Patrick Ryan, a freshman, because we need to try to solidify that position as fast as we possibly can,” Mahoney said. “We need to find the right person. The problem that has plagued us offensively is a lack of consistency, and if you look at last week, the first three series, we had two interceptions and a fumble.

“And turnovers—six turnovers, 14 penalties. That’s not Chicago-like at all. Those are things we can’t do.”

Ultimately, the team hopes to advance to 4–2 on the season, and 2—1 on the road.