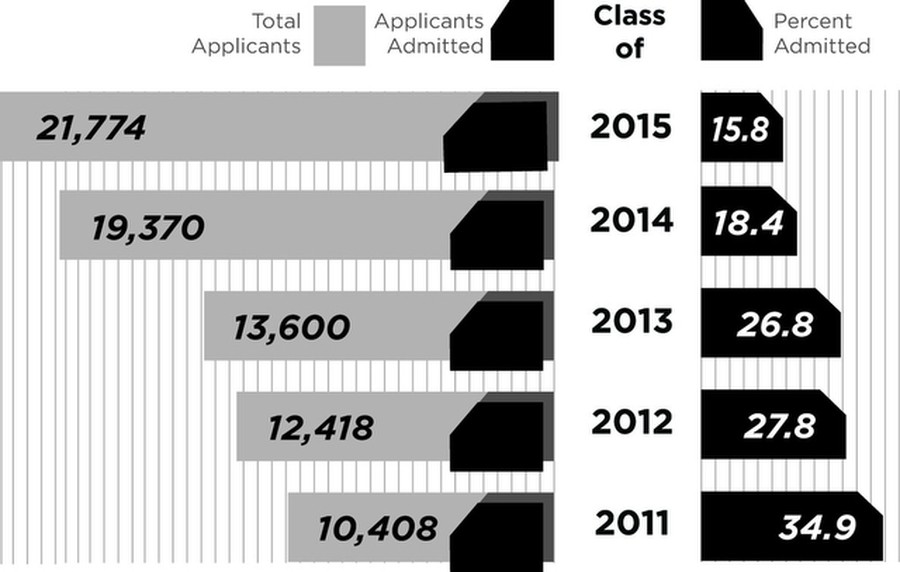 In an all-time low, 15.8 percent of applicants were offered a place in the College Class of 2015, down 3 percentage points from last year, and nearly half of the acceptance rate four years ago.

The declining acceptance rate at the U of C falls into a trend of increased selectivity across the nation, as schools have received a flood of applications, which strongly correlates with wider access to the Common Application, increased financial aid, and stronger efforts by admissions offices to attract students.

“There are students in parts of the country like the South and California who might not have known about the University of Chicago, who are hearing about the University of Chicago for the first time,” University spokesperson Jeremy Manier said. He added that the expansion of study abroad opportunities, as well as the opportunity to experience Chicago through the Chicago Studies program, has also attracted more applicants.

Among its Midwestern peers, the U of C's acceptance rate for the Class of 2015 is slightly above that of Washington University in St. Louis (15.4 percent), but lower than that of Northwestern (18 percent). This year, the five most selective American universities were Harvard (6.2 percent), Columbia University (6.9 percent), Stanford (7.1 percent), Yale (7.4 percent), and Princeton (8.4 percent).

“The standard for any institution has to be what you’re doing to best serve students,” Manier said. “Comparing numbers implies that there is a universal standard, which there isn’t,” he added.

As the College has become more selective, the percentage of students who matriculate at the University has increased. Last year, while the College’s acceptance rate declined by approximately 8 percent, the yield of students who chose to attend increased by 3 percent. Manier said that the yield was expected to increase from last year’s 39 percent, although he said it was difficult to predict by how much the number would grow. Manier also said that while the yield would increase, class size would not.

Gavin Schiffres, a senior at Packer Collegiate Institute in New York City who was accepted through Early Action, said that the U of C’s low acceptance rate helped him convince his parents to let him apply.

“Admission rates reflect a certain selectivity about a school,” Schiffres said. “I wanted to go to a school where they separated the wheat from the chaff, and at Chicago I knew I wouldn’t be the smartest person in the room.”

Schiffres said that he was persuaded to apply to the U of C after an information session at his school. Once he was accepted, Schiffres received a handwritten note from his admissions counselor quoting lines from his application that he enjoyed. Schiffres said that all of his friends who had been accepted to Chicago also received personal notes with their acceptances.

While the declining acceptance rate indicates a more selective admissions climate, Manier said he did not believe that the University’s success could be measured by how many students it admitted.

“The best measure of our success is how enthusiastic students are about the University of Chicago,” Manier said. “And that’s something that we’re seeing.”