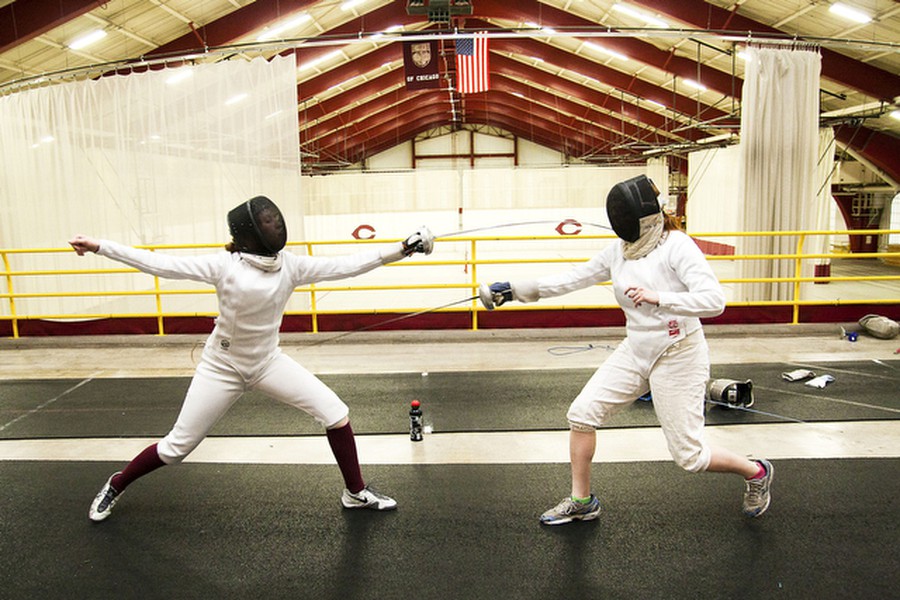 U of C fencers are a proud bunch. The fencing club’s website even links to a page claiming that fencing is better than sex. But why shouldn’t fencers be proud? Their sport is closely related to code duello, conjures up images of Zorro and d’Artagnan, and is one of only four sports that have been present at every modern Olympics.

UChicago fencers will have particular reason to be proud this weekend, as they host the 2011 United States Association of Collegiate Fencing Clubs (CFC) National Championships, the world’s largest collegiate fencing event. Over 700 fencers from over 40 universities nationwide will converge upon Chicago this Saturday and Sunday, making it one of the biggest sporting events held on campus in years. Simply put, to quote fourth-year Fencing Club President and Maroon Head Copy Editor Victoria Kraft, “This is a really huge event.”

But for many, the sport of fencing is hardly understood, though albeit intriguing. “Maybe it has something to do with the stereotypes we get from movies or books, but fencing is pretty universally considered romantic, dangerous, dramatic, sexy,” Kraft noted. “In actuality, it’s a sport, and a pretty intellectual one at that.”

Indeed, many of the great thinkers whom students at the University of Chicago encounter once engaged in swordplay. Karl Marx fought a duel by sword (he was injured and the fight stopped, altering world history). Voltaire, Lord Byron, René Descartes, John Milton, William Shakespeare, and George Handel all engaged in the sport of fencing in some form or another.

Fencing requires three major attributes: quick feet, fancy swordplay, and a good instinctual sense of strategy. “I adore the fact that it requires you to engage all parts of your body at once, brain and body. You can’t just be fast or just be smart—you have to be both, at the same time,” said fourth-year Isadora Blachman-Biatch, the captain of the sabre squad.

Fencing—fighting by sword for sport—is as old as the sword itself. There are depictions of the ancient Egyptians engaged in fencing, along with evidence that the Assyrians and multitudes of other ancient cultures fenced. Fencing developed simultaneously in multiple areas of Europe in the medieval era, manifesting itself famously in jousting events in England. By Shakespeare’s day, swordplay had already developed a romantic connotation, as seen in famous moments of Hamlet and Romeo and Juliet.

It was in 18th-century France that modern fencing was developed into something fencers today would recognize. All matches today begin with the fencers saluting one another and the director (official), a remnant of fencing’s roots in the chivalrous conduct of the duel. Following the calls of en garde, ready, and fence, the match begins. Today, hits are registered electronically, alleviating earlier difficulties judges had in spotting hits that occur within the blink of an eye.

Modern fencing consists of three styles, distinguished by rules and weapons: foil, sabre, and épée, whose names come from the weapons used. Fencers almost always specialize in one of these three styles, dividing the team into three squads.

In foil matches, hits can only be made to the torso with the tip of the weapon. The foil is light and agile, and can be “flicked” with the wrist. Should two hits occur simultaneously and both electronic scoring lights be illuminated, the fencer on the attack receives the point. Matches are typically to five points in all three styles, making fencing a fast-paced sport indeed. This makes those judgment calls on simultaneous hits hugely important, which often leads to impassioned exchanges with the director. Fourth-year Andrew Margolskee, a foil fencer, quipped with a hint of irony that fencing in the foil style can quickly make you an “egotistical son of a bitch.”

In sabre, hits can be made mostly anywhere above the waist by the tip or the blade of the weapon, which is also light and bends easily from side to side, allowing for more violent slashing movements. This style is likely derived from fencing atop horses and, like foil, rewards the attacking fencer in case of simultaneous hits. Sabre is considered the most aggressive of the styles, as well as the quickest. Fencers are prohibited from crossing their feet (like in foil) in order to prevent them from simply charging at one another. That said, there is a significant role for the defensive fencer in sabre who can fend off (parry) an attack and register a hit.

Blachman-Biatch, the sabre captain and one of Chicago’s top individual fencers, began fencing on a whim her first year and quickly fell in love with the sport and, specifically, sabre. “Coincidentally, I guess, sabre does resemble an activity I did in high school—policy debate—insofar as both are fast and extraordinarily aggressive,” she said.

Finally, épée is a style developed by French students who wanted their fencing bouts to more closely resemble duels. Thus, in épée, any part of the body is a legal touch, although hits must be made with the tip of the weapon, which is the heaviest of the three. Significantly, in épée simultaneous touches, or hits, are allowed and both fencers receive a point, whereas in the other two styles only the attacker would receive the point. This leads to a less aggressive match in which both fencers try to bait the other into a mistake without getting hit.

“Good épée is subtle: It’s all about using your body language to lie to your opponent, to trick him or her into making a mistake,” third-year épée captain Hannah Provenza said. It’s no wonder that Kraft, herself an épée fencer, described the épée squad as “smart-asses.”

The University of Chicago Fencing Club, founded in 1892, has aspirations to succeed on their own turf in the national championships this weekend. Despite being a team of intellectuals, they are quite the formidable fencing force. “I think the thing most people don’t realize is just how good our team is,” second-year fencer Michael Dunn of the épée squad said. “We have guys on this squad who went to Junior Olympics, who trained at dedicated fencing clubs like the Fencing Academy of Philadelphia or Lilov’s Fencing Academy.”

The women’s club has had particular success recently, winning three trophies at the Midwestern Fencing Championships and earning a reputation as one of the top club teams in the Midwest, forcing schools with varsity fencers like Notre Dame (which has produced Olympians) to bring their A-game.

Blachman-Biatch attributes the team’s success to its intellectual character. “As a team, one of our strengths is that we’re really smart strategically. Unsurprisingly, given that we are UChicago students, we put an emphasis on thinking,” she said.

Many UChicago fencers do not begin fencing until college. Provenza actually joined her first year after stabbing a fencer with a pencil who then “jokingly said he wouldn’t forgive me unless I came to practice and learned how to handle pointy objects safely.”

Blachman-Biatch joined her first year because she had no homework to do one night and agreed to accompany a friend who was interested in fencing to a practice.

Despite the fact that many fencers are on the team thanks to happenstance or curiosity, the team is about as dedicated to their craft as any on the Chicago campus. Between 5 p.m. and 7 p.m. on Mondays to Thursdays, the third-floor balcony of Henry Crown is filled with individuals wearing white suits and masks reminiscent of beekeeping outfits, with their swords and feet moving with dance-like precision. While it may appear easy, fencing takes incredible amounts of practice, so that attacks, counterattacks, and the countless tactics one can employ become instinctual.

“The best part for me,” Provenza said, “is the Zen-like sense of focus I experience at tournaments. You forget all your everyday worries and responsibilities and dedicate your entire concentration, for a few minutes, to dealing with the opponent facing you...it’s like a drug for me.”

Among the fencers to watch is Blachman-Biatch, who placed fifth last year in the tournament and, according to Provenza, “has only gotten stronger over the last season.” Both the men’s and women’s teams, however, hope to achieve individual and team success while hosting.

Hosting the CFC National Championships is no small undertaking in and of itself. “I can’t even convey how much crap we’ve had to do,” Kraft said. The process began in 2009, as the team put together a bid proposal over six months. After winning the bid over UCLA, the difficult part began.

Coordinating it all is Daniel Lascar, an Argonne National Laboratory physicist. With all the planning involved, it appears necessary to have a nuclear physicist at the helm. Among the challenges, according to Lascar, are transporting 10 tons of material to Henry Crown within a budget, hiring and feeding 40 qualified referees and 10 additional officials, the logistics of managing close to 1,000 people, reserving hotels for the fencers and the officials, and setting up the materials (14 tons) for the tournament without adversely affecting Henry Crown.

There promises to be plenty of great fencing this weekend, and spectators are encouraged to attend. Lascar recommends that those new to fencing check out the épée competition, as it is the easiest for the newcomer to follow—a hit equals a point.

No matter the style, spectators are sure to encounter plenty of entertaining fencing in Henry Crown this Saturday. “It’s always important to remember that even though this is a team event, each action is never more than one fencer against another,” Lascar said. “It’s an intensely personal sport and spectators will also see a lot of intense emotions and exuberant yelling.”

One word of warning: According to Provenza, “fencing will ruin swashbuckler movies forever, because you’ll see just how slow and overly dramatic the actors’ movements are!”

The CFC National Championships commence at 8:30 a.m. Saturday and go through 8 p.m. Sunday. For more information, visit http://usacfc.org. For more on the history of the sport, check out Richard Cohen’s By the Sword, which was consulted for this article.