The double life of a barroom carpenter 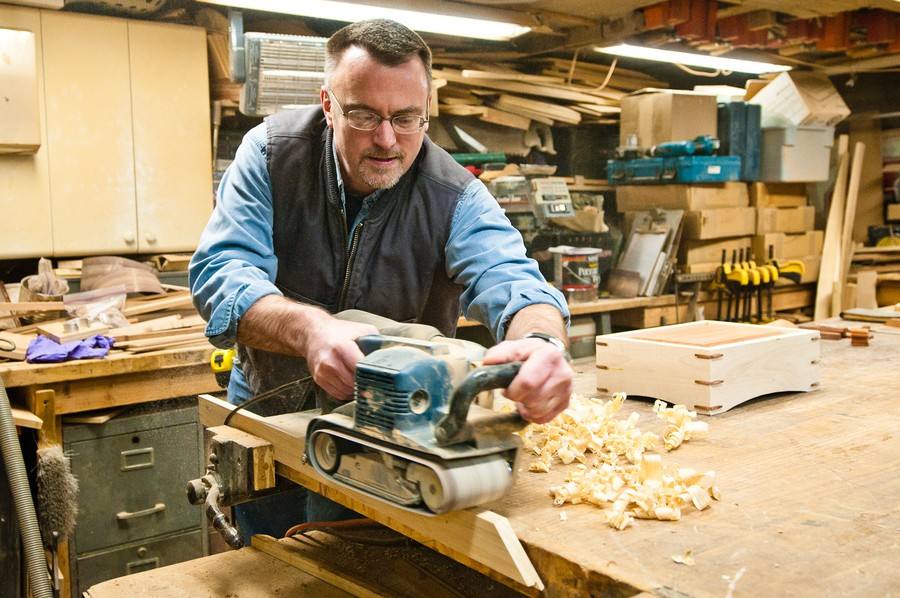 If one tries to picture what an artist in a bar should look like, images of someone poring over a sketchpad with a half-pint in hand may come to mind.

At The Pub, however, in the basement of Ida Noyes Hall, the artist is not at the counter so much as behind it. He is a bartender named Jay Hayward, and his work is the paneling that lines the bar’s walls.

Hayward, an architect by day and bartender by night, has a precise process for helping someone to choose a beer, which he likens to the way in which he guides his clients in architecture and furniture design, who sometimes have a hard time expressing what they want at the beginning of the process.

“They just don’t know they know what they want,” he said. At the Pub, he knows the flavor and feel of the 24 beers available, and can narrow down what someone would like based on a few beers they’ve liked in the past.

“I look at how they live and take them to look at different styles and places. From there, we narrow it down and see what they would be comfortable living in. We have to start with what they need from the space,” he said.

Identifying how strangers live and what they need from their home, however, requires precise and intensive observation. Hayward tries to recognize how and why clients use different rooms and features of their home.

“Sometimes I feel like a psycho-analyzer. A large part of product design is observing and behavioral analysis, all the way down to ergonomics,” he said.

Hayward’s work peppers the entire University campus. He built the gazebo in the courtyard of the Lab Schools, along with cabinets and furniture for the school. He has designed the interiors of several Hyde Park homes, including the basement of his friend and economics professor Steven Levitt.

While his design process is exhaustive, Hayward said it’s necessary in order to ensure the final project is functional and beautiful in addition to artful.

“All art should be evocative in some way, and it can be a variety of emotions. But I think all art must have some aspect of beauty, in some way be done beautifully,” he said. “And if I’ve done my research with the people, I can get a grasp on how they might want to live. It has to make them feel comfortable.”

“It’s their life. I can’t just impose my vision.”

Hayward decided he wanted to be an architect at seven years old when he saw a housing development being built. When his mother said that architects were the planners and thinkers behind the project, his passion for design was born.

He went on to study architecture at University of Illinois, Urbana-Champaign. He was still looking for work when Skidmore, Owings, & Merrill, one of the largest firms in the country, laid off thousands of employees. Feeling that he couldn’t compete with the flood of experienced architects, Hayward turned to furniture.

His carpentry skills unexpectedly led to a bartending job, when the owner of a restaurant he was building couldn’t pay his fee. Needing a job, he stayed on as the restaurant’s pastry chef, eventually working behind the bar.

He arrived at the Pub for Tuesday Trivia Night five years ago, and landed his current job when his sister, then the manager, asked for an extra hand.

Bartending is only secondary to Hayward, but he keeps with it because he appreciates the chance to interact with people—something his solitary workdays in his basement studio don’t offer him.

“We get some regulars here. Some people will come and say goodbye when they leave, and they’ve gotten to know me,” he said.

The Pub, where he designed the wall paneling, is also one of the few places where he gets to see his work after it’s completed. But he says he doesn’t care much for appraising his craftsmanship after-the-fact.

“You have to let it go once you’re done,” he said.