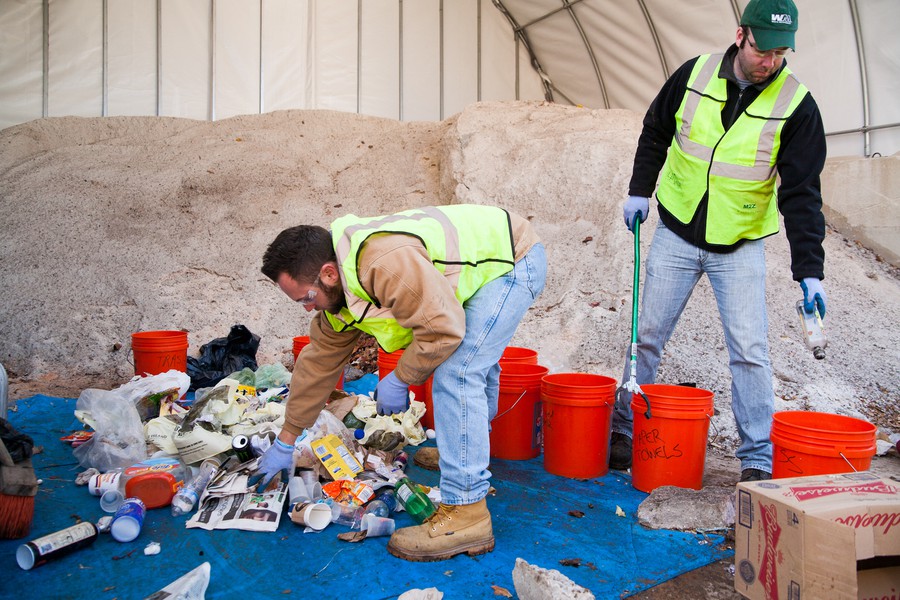 The Office of Sustainability, along with Waste Management (WM), completed the University’s first waste audit last Friday, assessing the contents of more than 7,000 pounds of trash from 35 areas across campus.

From Monday to Friday last week, 200 to 300 pounds of trash were collected and evaluated daily to gauge the amount of recyclable materials tossed away as regular waste. The results of the audit, which will be released along with WM’s recommendations for improvements by the end of the year, will provide launching points for recycling campaigns in 2013, said Sony Rane, the program coordinator at the Office of Sustainability, who’s leading the audit.

About 40 buildings were assessed all over campus, including Harper, the Regenstein, South Campus, Max Palevsky, Pierce Tower, Stony Island, and I-House, with prior notice given to building managers. Currently, campus buildings offer single-stream recycling and composting in dining halls.

The audit was conceived shortly after the University expanded its single-stream recycling program to include residential halls in 2011. The project had been stalled, however, for about a year and a half due to issues over privacy and confidentiality laws.

“The biggest issue was getting legal finalized to make sure all our bases were covered,” Rane said.

“We didn’t really want people to know. We wanted to see what an average trash can looks like. If we gave them advance notice, maybe people would have tried hard to recycle. But we didn’t want that to happen; we wanted a typical day,” Rane said.

Even so, the ongoing audit was publicized regularly on the Office’s Facebook page, featuring unusual waste and inviting students to watch the process.

After administering the audit along with a team of four contracted auditors called sustainability specialists, WM regional manager Sean Daley said that the contents and proportions of the trash were fairly “typical.” Neither Rane nor Daley could comment on the percentage of improperly discarded trash, pointing out it would be hard to interpret just by sight. The published results will include these percentages.

Measurements were taken according to weight, after WM sustainability specialists sorted trash into recyclable categories (plastics 1-2, plastics 3-7, paper, cardboard, aluminum, glass, etc.) and organic waste that can be composted.

“We’ll have really good baseline data. We want to be able to educate our University community better on what is proper to throw into our trash. So if, say, Stony Island had 30 percent of paper in their trash, we’ll know to market that,” Rane said.

This audit will add the U of C to a long list of colleges conducting evaluations of waste. Harvard University, for example, conducted an audit in June 2011, finding that residents misallocated 28 percent of compostable materials, 7.9 percent of paper, and 4.6 percent of plastics, according to Harvard’s Sustainability Web site.

“It’s becoming more and more common for universities to do this sort of thing as there’s more of a focus and desire to create cultures of sustainability on a campus level,” Daley said.

Other universities, like Stanford University and Rane’s alma mater University of Pittsburgh, often employ student volunteers as auditors. But the Office of Sustainability elected to conduct a more comprehensive evaluation, hiring professionals who audited for an entire week and will provide evaluations on the recycling program as a whole.

“Often, it’s these recommendations that are more helpful, allowing [the Office of Sustainability] to target approaches to recycling as well as marketing,” Daley said, emphasizing the importance of the Office’s action in addition to relying on awareness to motivate others to action.

The audit took place at a sorting site at South 61st Street and South Blackstone Avenue, and, afterward, all the waste that was measured was thrown away, including the recyclable materials.