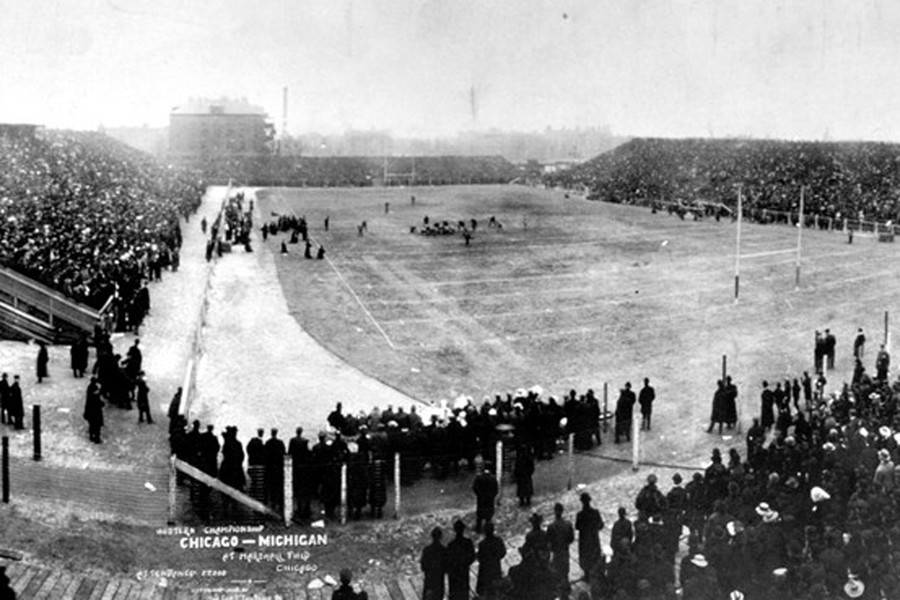 Courtesy of the Library of Congress

By a score of 2-0 , in the greatest football game ever played in the West, Chicago won the long-coveted Championship of the West on Thanksgiving Day. It was a triumph of the spirit of fight over the spirit of overconfidence, quality over weight, Coach Stagg over Coach Yost. The position of the “Old Man” as the premier coach of the West was startlingly vindicated and some of the most remarkable of surprises resulted from the genius of the Wizard.

Michigan has an excuse with which to account for the result, but it is not a reason. About fifteen minutes after the commencement of play, Joe Curtis, the great tackle, whether by intent or accident, crashed into Eckersall after he had gotten away a punt and knocked the quarter back, stunned and bruised, to the ground. While thousands of spectators watched breathlessly to see if “Eck” could remain in the game, the tackle was ruled out of the game by the officials for unnecessary roughness. Had Curtis remained in the game, say the Maize and Blue adherents, the result might have been different. Chicago men, however, remember that while the giant was still in the game Bezdek found him good for a number of generous gains, and, on the other hand, his efforts at carrying the ball were absolute failures. “Octy” Graham, the other great lineman ground gainer, averaged eight inches for each of the nine times he carried the ball, so that estimates as to what Joe might have done are being discounted.

To the surprise, but also to the pleasure of the Chicago rooters, Schulte was played, and while his presence in the game had but little effect on the result, it also robbed Michigan of another excuse. It was thought that in view of the indisputable evidence which has appeared in the papers as to the length of Schulte’s experience that Yost would not have the never to play him, but he appeared, and seemed to be much needed.

The weather was ideal when candidates for seats began to line-up on Fifty-seventh Street to buy general admission tickets. By twelve o’clock both the north and south stands were filled, and the reserved seats were rapidly being occupied. For a short time a socker game amused the crowd, who jeered and exercised their wit at the expense of the sockists, but who seemed to enjoy the novel exhibition. This last moment before the game the hay, which had covered the field for two weeks, was raked off, leaving the field in perfect condition and the slight snow flurries which continued all afternoon were not heavy enough to materially affect the footing.

The yelling began early and a brisk interchange of preliminary cheers came from the rival bleachers. These, however, were dwarfed in the thunderous roar of welcome that greeted the Maroon team, and that which a minute later greeted the wearers of the Maize and Blue.

Chicago won the toss, and received the ball in the north goal. Then came the first surprise of the day, for she promptly tore off a number of good gains through the vaunted Michigan line. When finally the ball went over, the second surprise of the day materialized, for the Chicago line held like Harvey-ized steel plate. From tackle to tackle it was practically impregnable to the Michigan attack, the Yost machine making first down but eight times, as against the twenty-four times made by Chicago.

The West rose in the estimation of the East at this stage in the game, for the defense of both sides was gilt-edged. That of Chicago was particularly phenomenal. Although outweighted at least fifteen pounds to a man, the gritty linemen held the mighty Michigan bookfield with a determination which shut down every play to gains of inches.

Early predictions were completely reversed by the event. Dopesters figured that Chicago would run Michigan’s ends and that Michigan would tear the Maroon line to pieces. But it was Chicago’s ends that Garrels ran for the distances which raised the Michigan gains high enough to save her reputation and it was the Michigan line that yielded the most to the Maroon attack.