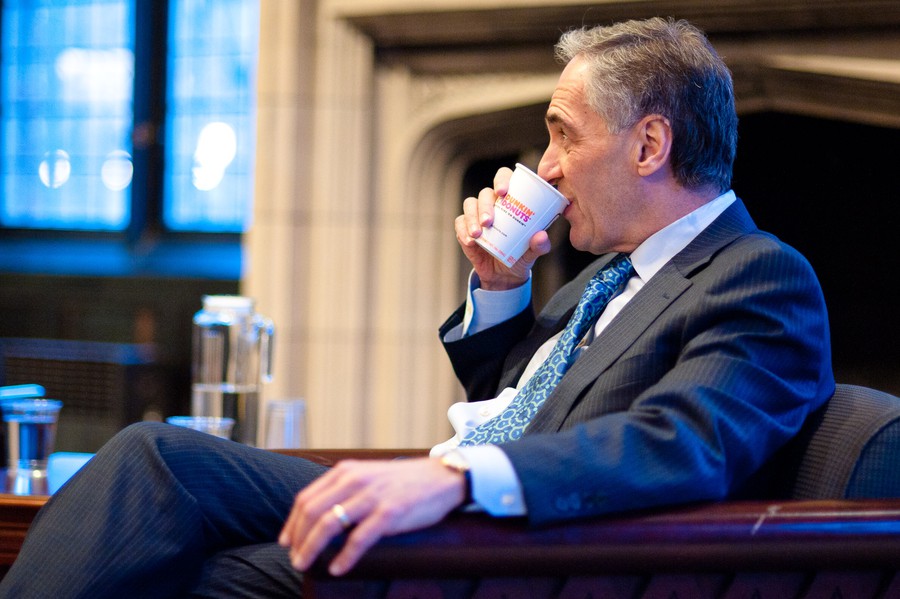 “We understand that the past four years have been economically tumultuous, we’ve faced increased need, and we want to continue to enhance our financial program, generally,” he said. When pressed about resources for increased aid, Zimmer identified alumni contributions as the primary source for prospective fundraising.

“With the evolution of academic programs, we try to retain and recruit faculty and momentum,” he said. “We’ve tried to bring in a first cadre faculty for the new Institute for Molecular Engineering.”

First-year Aidan Milliff came to the forum to relay concerns voiced by the Inter-House Council. Milliff relayed concerns about inflexible meal plans and potential complications posed by the recent increases in the size of incoming classes.

Responding to Milliff’s concerns, Warren-Coleman promised “a re-evaluation of housing based on student needs.” Warren-Coleman said that this re-evaluation could include modification of meal plans and construction of more apartment- and suite-style living accommodations, options that students have expressed significant interest in.

Second-year Liz Denhup came to the forum to express concern for anti-union politics in Hyde Park development companies. She said that she felt the forum was productive, and offered an opportunity to directly put concerns to administrators.

“Even though administrators have been largely responsive, it can be difficult to navigate administrative bureaucracy,” she said. “Seeing someone face-to-face was satisfying. Kim even offered to put me in touch with the College’s Chief Investment Officer, Mark Schmid.”

Students also raised questions regarding Harper Court development, student body social compartmentalization and self-segregation, the new Logan Arts Center, more accessible employment and internship opportunities for international students, security measures, and the search for a replacement for Goff-Crews, who is set to leave her post at the end of the academic year.