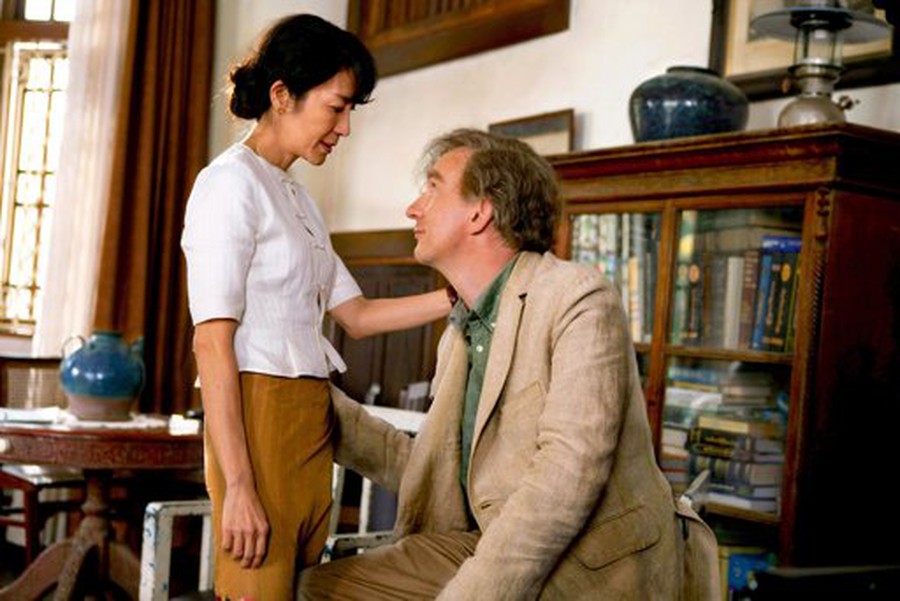 Making a biopic is always a daunting task, even more so when the subject is one of the most prominent Nobel Peace Prize-winning women in history. I don’t want to say that director Luc Besson fails in this respect, but as a personal admirer of Aung San Suu Kyi, I can assure you that Besson does not come close to encompassing her greatness.

For those not familiar with Suu, she is a Burmese political activist who has helped carry the country from one of the most oppressive military regimes in the world into a process of democratic change. Suu is the daughter of revolutionary Aung San, known as the father of modern-day Burma. The Lady follows Suu (Michelle Yeoh) from her return to Burma in 1988 until her husband’s death in 1999. Along the way, Suu must struggle to lead the people of Burma to independence while she is under house arrest and struggling with the absence of her family.

Upon arriving back in Burma in 1988 to take care of her sick mother, Suu takes up the responsibility of fighting the military regime and quickly becomes a source of hope in Burma. The military soon place her under house arrest, barring her from speaking in public and keeping her away from her family.

Besson chooses to center the plot around Suu’s relationship with her husband Michael Aris (David Thewlis) and sons Kim (Jonathan Ragget) and Alexander (Jonathan Woodhouse), rather than the more interesting story of Suu’s impact on modern-day Burma.

In addition to the weak plot premise, Besson’s poor direction and screenwriter Rebecca Rayne’s uninspired script handicap the film. Besson fumbles with the action, which fluctuates between moving too fast and lagging. Besson, who is known as one of the most Hollywood-friendly French directors, doesn’t seem to have the patient, gentle touch needed to elevate the film beyond the simple, albeit inspiring, story it tells. At times, a sentimental, sticky score and generic dialogue cover scenes that should instead be carried by Yeoh’s emotive acting.

Yeoh is fantastic as Suu, capturing her gentleness, graceful presence, and unwavering dedication. Unfortunately, Yeoh gets no help from Thewlis, whose portrayal of a man living out his final days (he’s dying of prostate cancer) is a lesson in poor acting. Suu’s two sons seem out of place: The script dedicates little time to them or their relationship with their mother. There is one redeeming scene, however, when the youngest boy, Kim, returns home to find Arris sitting on the couch, engrossed in work. Kim utters the simplistic, catchall phrase, “I miss Mom.”

But these few moments of intimacy belie the generic writing that robs the tale of Aung San Suu Kyi of its inherent integrity. When it seems like the tale of Suu is going to take off, as Yeoh’s first speech promises, Rayne muddies the film with bland dialogue. And despite his history with action films, Besson seems hesitant to pick up the pace.

Besides Yeoh, the other high note is cinematographer Thierry Arbogast (She’s So Lovely, The Fifth Element), whose chromatic-inspired shooting captures the beauty of the Burmese landscape while providing strong visual contrast throughout. Suu is often dressed in a lightly colored anyi (blouse) and matching longyi (skirt), the colors jumping out onscreen, emblems of Suu’s inner radiance and gentle demeanor.

Other moments provide visual relief from the muddied plot. In one of The Lady’s most powerful scenes, supporters of Suu’s political party, which has just won an election, flood Suu’s solitary compound, donning military guards with flower necklaces along the way. This visual metaphor implies that the guards, dressed in traditional green uniforms with red bandanas, are not simply tools of an oppressive regime, but rather members of the Burmese community. The menagerie of colors not only creates a beautiful composition but also conveys a sentiment that Suu herself believes in strongly, that all Burmese citizens are intertwined.

In 21st century film, it is all too common for directors to take the easy way out, especially when they expect the plight of the protagonist to lead the story. Here, the movie does not do Suu justice. I found myself wanting more of Suu the hero and less of Suu the mother. It is hard to say any film could do one of the most inspiring women in history justice, but it would have been nice to see someone really try.