Eco-friendly activities kept students busy all week, on and off campus. 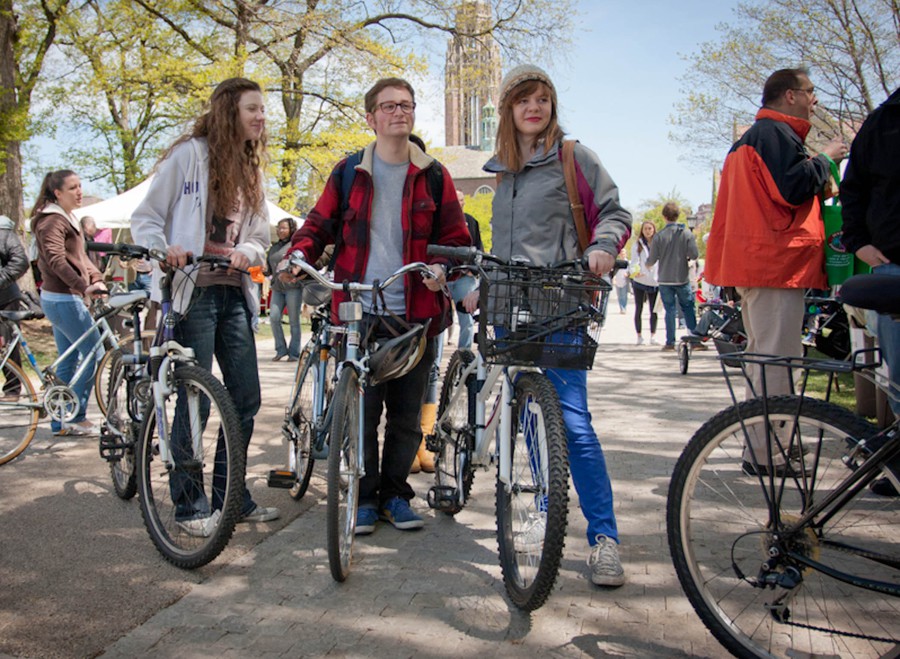 Earth Week spruced up University sustainability efforts last week through a number of student activities both on and off campus.

Using Frankenstein, who is made “100% from recycled content,” for inspiration, the University’s Office of Sustainability made “recreate” the theme of this year’s Earth Week.

“Environmentalists have a reputation of being pretty serious and dour,” said Ilsa Flanagan, director of the Office of Sustainability. “We like to poke a bit of fun at ourselves and use a horror movie theme every year.”

But beyond simply giving Earth Week a little levity, the horror film theme reflects a serious truth. “What is happening to our planet is a horror story of sorts,” Flanagan said.

On Wednesday, Sustainable Actions for a Green Environment (SAGE) screened the award-winning documentary Bag It, which examines the hidden dangers that come from our overuse of plastic bags that can harm marine animals and reduce male fertility.

Thursday’s tour of The Plant, an old meatpacking factory shut down in 2007 that is being repurposed as a vertical farm and food-business incubator, gave participants a firsthand look inside a huge re-creation project: the transformation of a rundown factory into a hub of sustainable production and community involvement.

Tour guide Shelby Phillips explained that The Plant was being transformed through aquaponic and hydroponic systems, a shared kitchen for small businesses to rent, and an education center for entrepreneurs.

“We are taking a building in total disrepair and turning it into something very useful,” Phillips said.

The aquaponic system, which mimics the symbiotic relationship of a riverbed to farm vegetation and fish, and hydroponic system, which grows plants in water, would use a fraction of the water and energy that normal agricultural techniques would.

“We want to essentially unplug ourselves from the city,” Phillips said.

Back on campus, Earth Week concluded on Friday with Earth Fest, where students took pictures in photo booths while pledging to “avoid bottled water” or “use travel mugs.” Other students planted herbs and took home reusable totes for their groceries.

“We wanted to give students in particular a chance to see that being good to the planet can be as simple as swapping clothes, using bikes and scooters instead of a car, and buying local food,” Flanagan said. “It just takes an awareness of the waste we generate and the intention to live a bit differently.”

Other activities during Earth Week included a workshop focusing on reusing scrap materials and a bike tour of Chicago’s South Side arts scene.