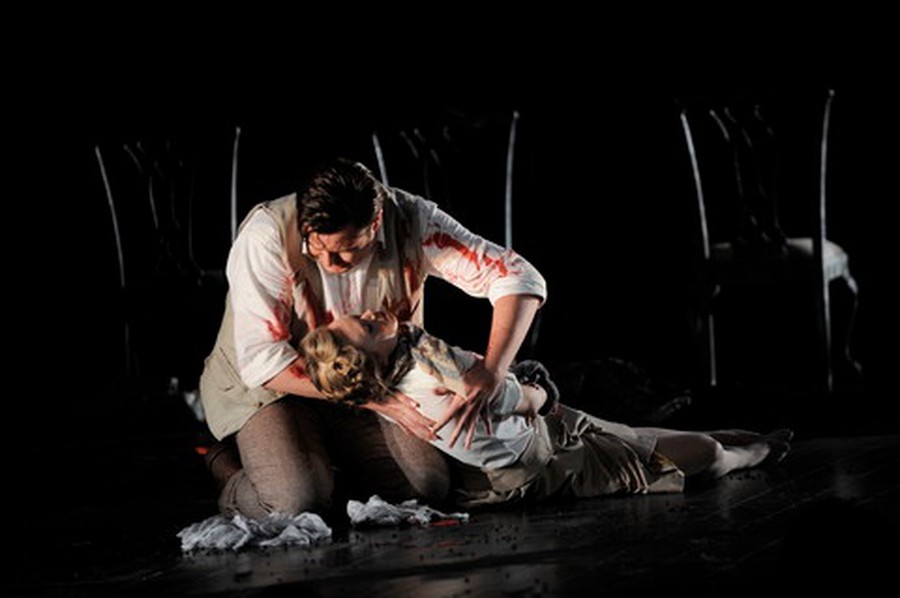 George Frideric Handel (1685-1759) was a prolific composer in an age of prolific composers, and in recent years, his works for the stage (42 altogether, though some have been lost) have enjoyed a renaissance. Teseo is already the fifth work performed around the world this season and the second in Chicago, after Rinaldo appeared in March at the Chicago Lyric Opera.

Handel’s works are almost without exception opere serie—stately, aristocratic, highly stylized operas, which, by the end of the composer’s lifetime, had fallen out of fashion. The most shocking feature of his stage works is his use of the soprano voice part for traditionally male roles. Originally portrayed by castrati (castrated men with uniquely high voices who have understandably gone out of vogue), today they are interpreted either by countertenors (males capable of singing in higher registers) or by women in men’s clothing, following the logic that “elevated” persons ought to have “elevated” voices. Although this aspect of the genre becomes less odd with time and exposure, it never manages to transcend its context within and in the service of l’ancien régime.

Teseo suffers from a poorly constructed plot, a stark contrast to the composer’s usual formal writing. Its summary requires a lengthy preface explaining the Greek mythological origins of the characters, like the sorceress Medea, and a subplot involving two servants trying to find love proves to be of little interest. With no significant obstacle or conflict, Handel futilely asks us to sit through number after number of what is an almost ostentatiously uninteresting romance. Despite these plot-based problems, the music, though quickly composed in late 1712, deviates uncharacteristically from his typically strict style.

One large question in every production of a late Baroque opera is whether the roles originally written for castrati will be sung by counter-tenors, who generally have softer voices, or by women, who can sing parts in the soprano and alto ranges with considerably more force. Chicago Opera Theater’s production of Teseo dispensed with the composer’s lone bass role, leaving a somewhat treble-heavy cast made up of four women and two countertenors; the lowest voice part is an alto. This odd casting may help explain the work’s obscurity, since the vocal writing, though inventive, tends to blend together, the voices too similar to stand out from the group.

A French Baroque set coupled with a reliance on period instruments conveys a strong sense of place, though the feature that dominates the set is a series of swiveling panels representing doors. The 22-member ensemble includes two harpsichords, a baroque guitar, and a theorbo, a type of lute. Apart from the principal oboist’s uneven playing—an instrument that the composer, unfortunately in this case, featured prominently—the orchestra, led by harpsichordist Michael Beattie, was still strong. Despite some sloppy violin during Medea’s incantation scene, the playing was relatively tight—though any orchestra in Chicago has the misfortune of inviting comparison to the Chicago Symphony Orchestra, considered the city’s most talented ensemble. Although a few instrumentalists appeared noticeably tired toward the end of the opera, this did not affect their effective support of the soloists. Leon Schelhase’s harpsichord performance (which, as is the norm in Baroque opera, continued without break from downbeat to curtain) is particularly marked for its clarity and tasteful ornamentation.

Cecelia Hall, playing Teseo, the impotent king’s long-lost son, is the only cross-dressing performer; countertenors sing both the king and the valet’s parts, with good technique but small voices. Hall and Manuela Bisceglie, who portrays Agilea, Teseo’s bride-to-be, were the strongest vocalists in the cast, handling the vocal agility that Handel demands with assured ease. Deanna Breiwick, portraying Agilea’s lady-in-waiting, had a fine voice despite moments of breathiness, achieving a clean high D in the third act, an accomplishment for any soprano.

Because Teseo is not one of Handel’s more famous or revered works, its production won’t naturally spark the acclaim one might expect from his Messiah. Given the plot’s limitations, the Chicago Opera Theater’s is a valiant if imperfect effort.