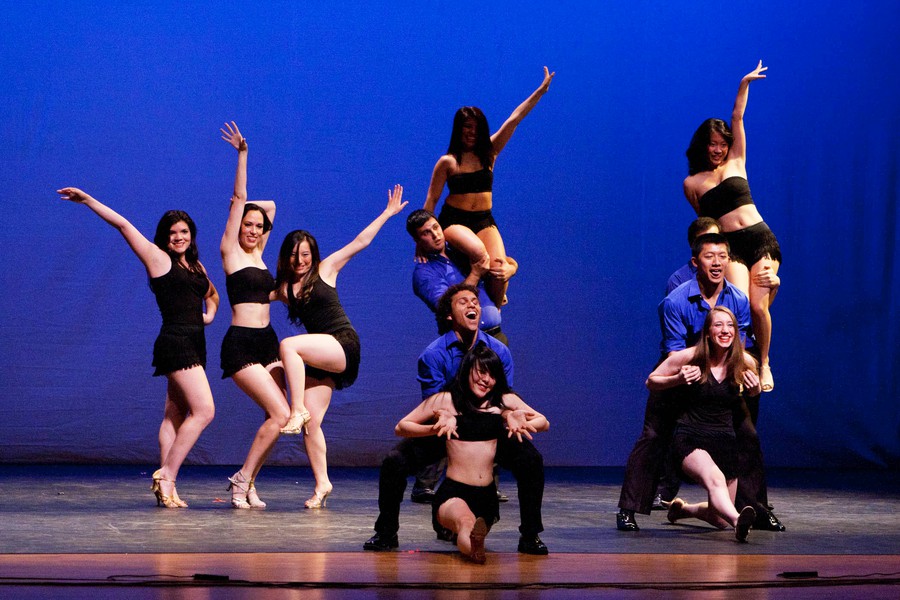 Though alluring red dresses, flamenco skirts, legwarmers, and tutus might not seem like wardrobe staples, all of them were part of the uniform at Rhythmic Bodies in Motion’s annual dance showcase. The recital, which took place in Mandel Hall this past Saturday and Sunday, was titled “LEGENDARY” and had almost 200 participants. With numbers as strong as these, the show easily continued its tradition of diversity: There were 14 different pieces with styles that ranged from bachata to step.

As the audience members settled down, the first act began without preamble. Women wearing navel-baring Amazonian tops and short black shorts performed kicks, spins, and cartwheels in the jazz piece “XR2.” The subsequent dances varied greatly in style and tempo. “Aura,” a modern dance number, for example, was slow and lyrical while other pieces, like “Radio Caribbean,” were considerably more upbeat.

Some dance numbers incorporated multiple forms of dance. “Set it Off,” choreographed by Kate Oppenheimer, Colin Bohan, and Anna Tripodi, combined elements of ballet and hip-hop to tell the story of a romance between a sheltered ballerina and a more streetwise hip-hop dancer. Another hybrid highlight was the Senior Piece, performed by the graduating members of RBIM. That dance incorporated a slew of different Disney songs to highlight the progression from O-Week to convocation.

Given the diversity of the pieces, it was unsurprising that many members of RBIM were involved in the show in a variety of ways. Third-year Erik Landry, for example, was the co-choreographer of the hip-hop piece “Swag Roulette,” and also danced in his own piece and two others. Fourth-year Suzanna So, RBIM’s Administrative Director, danced in five pieces, including “Senior Piece,” “Radio Caribbean,” and “Legendary 80s.”

So explained the reasoning behind RBIM’s “LEGENDARY” theme. “We wanted something that would be general enough so that all these different styles could choreograph something to it, but something that still had a powerful image.”

For Landry and co-choreographer Oscar Rivera, a fourth-year, the show’s theme presented an interesting challenge. Landry and Rivera tried to use recent hip-hop songs that they considered to be “legendary” for their piece. As they planned their choreography, they changed songs whenever they heard new music that they felt had to be included. Both Landry and second-year choreographer Annie Pei talked about recruiting dancers for their pieces from their own friend groups. Pei mentioned how difficult being a new choreographer without an established reputation was. She hopes that next year when fall auditions roll around, even more people will want to try out.

Still, RBIM’s XL-size ranks are already impressive, and its dancers devote one hour of weekly rehearsal for every piece they performed in. For members like So, who was involved in five pieces, that amounted to five hours of rehearsal a week starting in the beginning of winter quarter.

“It’s really hard to put together a show with so many people,” Pei, who is RBIM’s Outreach Chair, said. “It exceeded all of our expectations.”

The audience was surprisingly receptive this year,” Pei continued. “They were super energetic and I don’t think any of us expected them to react the way they did. It’s a great feeling.”

“The show was definitely a great way to end my four years at UChicago. I started crying out there,” So said.

“The thrill of being on stage is incredible!” Landry added.

“Everyone should try to dance, I think, at least once in their lives. It’s a whole different form of expression…we need that sort of artistic release,” Pei said.